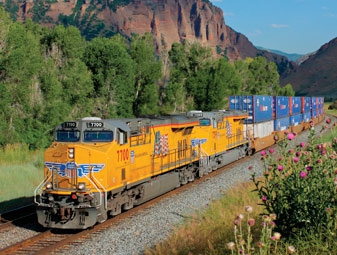 Cover story, September issue: Like most Class I railroads, Union Pacific has had to make adjustments to deal with sharp declines in coal and other commodities. While its $3.75 billion 2016 capital program is lower than last year’s, it upholds a strong commitment to maintaining a state of good repair, building capacity and improving technology. As well, UP is committed to sustainability. And then there’s yet another historic UP steam locomotive undergoing restoration.

At Railway Age’s 2016 Rail Insights conference, UP Chief Financial Officer Rob Knight sat down with Editor-in-Chief William C. Vantuono to discuss UP’s current state of affairs, and what may be in store in the short- to medium-term:

• Coal, one of UP’s primary sources of volume and revenues, has been in decline, for more than one reason, not the least of which is the low price of natural gas that has prompted some electric utilities to convert from coal. “There still is life in our coal franchise,” Knight said, indirectly dismissing those Wall Street analysts who have—shortsightedly in this writer’s opinion—tied UP’s future to coal.

• PTC accounts for a significant chunk of UP’s capital budget. “We have been aggressively pursuing completion, with eyes on that 2018 completion date,” Knight said. “It’s all very complex, and expensive. When finished, we will have spent $2.9 billion on capital up front, and we’ve already spent about $2 billion, which shows you how far along we are with it all. But it has been costly, and we’ll need to recover our investments somehow.”

• Though at the time of the conference UP had 1,800 locomotives in storage, Knight noted that the railroad plans to acquire 230 new locomotives this year, 70 in 2017, from EMD and GE Transportation. “What will drive orders after that will be how our business and the broader economy is doing,” he said.

• Of UP’s $3.75 billion capex budget, about $2 billion is allocated for replacement projects. “Our large projects (double-tracking the Sunset Route, for example) are mostly complete,” Knight said. He added that rumors of a track speed reduction on UP’s triple-track principal trunk line through Nebraska (North Platte to Omaha) are untrue.

• UP has a diverse franchise, is doing everything it can within its control to manage that franchise, and is well-positioned for growth, Knight stressed: “Industrial products are a lynchpin of our franchise. We’ve been experiencing domestic intermodal growth from taking trucks off the highways. Our petrochemical franchise has been a big growth engine. And we have reach into Mexico over all six border interchanges.” UP holds a 26% stake in Ferromex, a relationship that began with privatization of Mexico’s national railway in the 1990s.

Union Pacific’s Long Rail program, more than a decade in the making, ranks among the industry’s most significant engineering innovations. UP is the first railroad to import high-strength, head-hardened continuous-cast rail from Japan, in 480-foot-long sections. Only two welds are needed to create quarter-mile strings, instead of 17 welds connecting 80-foot sections—an 88% reduction in the number of welds required. Nippon Steel and Sumitomo Metal Corp. supply the rail, which is delivered to the Port of Stockton, Calif., by ship, and then transported in specially designed shuttle railcars to UP’s $18 million Stockton rail welding plant.

The facility is equipped with a custom overhead crane to lift the rail out of the cars. Holland LP is providing rail welding services for this program.

Sumitomo designed and built Pacific Spike, the first ship of its kind, to serve as UP’s long rail carrier. The vessel is outfitted with three cranes synchronized to simultaneously unload five 10-ton rail sections. Rail is stacked three bundles high onto the shuttle cars to be moved from the dock to storage.

Utah’s Great Salt Lake, the largest saltwater lake in the Western Hemisphere, is one of the world’s most unique, and fragile, ecosystems. It’s also home to UP’s Lucin Cutoff, a 20-mile-long rock-fill causeway built originally by the Southern Pacific. Without the causeway, rail traffic would be diverted to UP’s Shafter Subdivision south of the lake, requiring additional train starts. The causeway contained two culverts, both large enough for water and small boats to pass through, that were critical to maintaining the Great Salt Lake’s delicate balance of salt and fresh water. That balance impacts, among other things, the lake’s brine shrimp population, one of Utah’s major exports

The structure had been sinking for quite some time. Diving inspectors discovered cracks in both culverts’ sidewalls directly under the tracks in 2011. The west culvert was in danger of collapse. Both were closed by 2013.

UP turned to a U.S. Geological Survey computer model of the lake’s bi-directional water and salt flow to design a new causeway bridge to replace the culverts. The model allowed UP to determine a bridge width and depth that would duplicate the water and salt transfer once provided by the culverts. The U.S. Army Corps of Engineers and the Utah Division of Water Quality approved the design in 2014. The bridge is a 180-foot-long structure supported by 49 pilings, with adjustable earthen control berms that can be built up or removed. Described as “an innovative and elegant solution,” the berms can be modified if, for example, the ecosystem is determined to be declining. Construction of the bridge and berms is expected to be completed by the end of the month. UP will monitor salinity changes in the lake until 2021.

The Railway Industrial Clearance Association (RICA) recently named UP Railroad of the Year by. RICA consists of railroads, shippers and manufacturers, and logistics providers that plan and execute special movements of loads requiring extra height and width clearances. RICA recognition is based on peer votes in such areas as technological advances and customer service.

UP, with the help of its R&D lab at its Omaha headquarters, is deploying its version of the state-of-the art rolling stock inspection system known as Machine Vision.

UP’s Machine Vision consists of an array or “portal” containing a combination of fault detection sensors, cameras, lasers and strobes. As a train passes through a Machine Vision portal, the equipment generates a three-dimensional model of every railcar that can be viewed remotely from any UP computer. So far, the system is able to identify and measure 22 railcar components and flag defects that could lead to a delay or, in a worse-case scenario, a derailment. Inspections are conducted 24/7, in any type of weather.

Machine Vision inspections relay information on needed repairs before a train arrives in a classification yard. The technology helps improve yard throughput, reducing dwell time as well as the potential for misrouted cars or missed connections. So far, Machine Vision arrays have been deployed outside three UP yards in Nebraska, Iowa and Arkansas.

Various types of data come from wheel detectors, lasers, infrared cameras and line-scan cameras that photograph one continuous line of pixels at a time—50,000 photos every second—that are then assembled to form a continous image of the train. Algorithms developed by UP’s Omaha R&D lab analyze the data gathered by the Machine Vision portal as a train passes through the structure at speeds up to 70 mph, displaying high-resolution images of the train in near real-time.

There’s also LiDAR (Light Detection and Ranging), a surveying technology used for geomapping. Machine Vision uses LiDAR to generate three-dimensional images of an entire train. Algorithms look for defects using photography and LiDAR. For example, the system can verify that there is an appropriate and balanced amount of spring compression on a three-piece truck.Too much compression on one side throws off the car’s balance, which can cause a derailment.

One of the largest and most famous steam locomotives ever built—UPs articulated 4-8-8-4 “Big Boy” No. 4014—is undergoing restoration to operating condition (including conversion from coal to oil) by UP’s Cheyenne, Wyo.-based Heritage Fleet Operations.4014 will join UP’s other iconic steam locomotives—4-6-6-4 Challenger 3985 and 4-8-4 Northern 844—in excursion service when restoration is completed, and become the world’s largest operational steam locomotive. Alco built 25 Big Boys for UP between 1941 and 1944. UP took delivery of 4014 in December 1941. She was retired in December 1961, having traveled more than one million miles in 20 years of service. 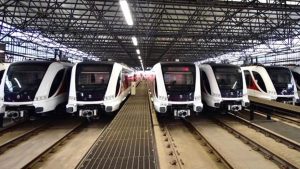