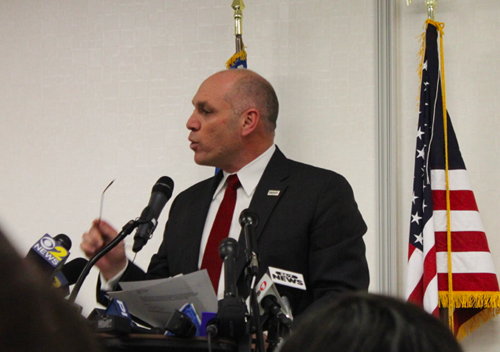 This is about the Long Island Rail Road. It’s about a dispute over wages and benefits. It’s about politics that have a stereotypically anti-labor House Republican majority poised to line up on rail labor’s side to embarrass a Democratic governor. And it’s about a union boss named Anthony Simon, who should be teaching strategy to future battle commanders at the Army War College.

Long Island Rail Road (LIRR), with some 600 track-miles, 124 stations, 83 million annual riders, and almost 6,000 unionized workers, is the nation’s oldest and busiest commuter railroad. Once owned by the storied Pennsylvania Railroad, LIRR was pawned off on the State of New York in 1966, and later made a ward of New York’s Metropolitan Transportation Authority (MTA).

Said LIRR at the time of its sale to the state—and pay attention, because this is important—“We just have a new owner and a new board of directors. We’re under the Railway Labor Act, just as we’ve always been. The people do not become state employees, they remain railroad employees . . . .”

Another ward of the MTA is New York City’s subway system (New York City Transit). In the same year the state purchased LIRR, all subway service was halted for 12 days by a strike. In response, the state legislature passed the Public Employees Fair Employment Act (commonly known as the Taylor Act), which outlaws strikes by public-employee unions and requires binding arbitration to settle wage, benefits, and work rules disputes.

For 13 years, the state-owned LIRR and its unions bargained under provisions of the federal Railway Labor Act (RLA). But in 1979, with a work stoppage on LIRR looming, the state did an about-face and challenged RLA coverage, seeking to invoke the more restrictive Taylor Act. In a case that reached the U.S. Supreme Court, it was held that, “To allow individual states, by acquiring railroads, to circumvent the federal system of collective bargaining . . . would destroy the longstanding and comprehensive scheme of federal regulation of railroads and their labor relations thought essential by Congress . . . .”

So it is that LIRR labor-management relations remain governed by the RLA and its long and drawn-out procedures that can avert work stoppages—but that does, unlike the Taylor Act, eventually permit a lawful strike. The difference between the two laws is crucial, because when Local 100 of the Transport Workers Union struck New York’s subway system for two days in 2005, in violation of the Taylor Act, a federal judge sentenced the local’s president to 10 days in jail and fined the union $2.5 million. Of course, LIRR management would prefer LIRR be governed by the Taylor Act, which can shrink a truculent union’s treasury small enough to fit in a conductor’s lunch pail.

Under the RLA, when parties fail to reach a voluntary settlement—and either side declines binding arbitration—a fact-finding Presidential Emergency Board (PEB) may be appointed to make non-binding settlement recommendations. The RLA was amended by Congress in 1981 to provide that if the sides in a commuter rail dispute could not settle voluntarily based on the first PEB’s recommendations, a second PEB would be created at the request of either party (only one is appointed in freight rail and Amtrak disputes). PEBs are designed to create public pressure on the parties to settle voluntarily.

The first PEB—as it does with freight railroads and Amtrak—makes non-binding recommendations. The second PEB, for commuter railroads only, asks each side to submit its last best offer, making a non-binding choice as to which offer it considers the most reasonable.

Since the 1981 RLA amendment providing for a second PEB in commuter rail disputes, there have been only two commuter railroad work stoppages following failed wage, benefits, and work rules negotiations—both on LIRR.

In 1987, there was an 11-day LIRR work stoppage, with Congress creating, during the strike, the equivalent of a third PEB—called an advisory board—that led to a voluntary settlement. In 1994, a two-day strike ensued after the parties failed to reach agreement following the report of a second PEB, but a voluntary settlement in the second day of the strike made congressional action unnecessary.

Note that the RLA does not provide for congressional action, which typically occurs when lawmakers fear a work stoppage is creating undo harm to a region’s or the nation’s economy. Actually, the RLA and its mechanisms have always been viewed as a manual for peace, and railroad strikes—freight, commuter, and Amtrak—have been relatively rare.

One of those rarities is upon us.

Simon, the unions’ chief negotiator—who bristled that his members had not received pay raises exceeding inflation since 1991, and who was determined to maintain LIRR hourly wages as high or higher than any other commuter railroad in the nation—recognized that while Cuomo’s cudgel over state employee unions was a threat of massive furloughs, the MTA couldn’t operate a commuter railroad by sacking large numbers of workers. Furloughing operating, maintenance, or certain clerical crews would immediately cause the quantity, quality, and safety of commuter rail to deteriorate rapidly.

Nor did Simon accept an alternative argument that an MTA contract offer to subway workers, which he did not wish to accept, was an appropriate pattern, insisting that, historically, LIRR’s pattern has been other commuter railroads, Amtrak, and even freight railroads—all governed, unlike subway workers, by the RLA. In fact, on commuter railroad Chicago Metra, management made an offer of a 20% wage increase over six years, which far exceeded any offers to any unions by LIRR or MTA.

Determining an appropriate pattern can be a difficult task, and management must guard against attempts by one union to leapfrog over a settlement accepted by another union. Indeed, patterns are not insignificant in labor-management relations and are cited frequently by both parties as situations warrant. PEBs often determine the relevancy of an asserted pattern.

The first fact-finding PEB, named by the Obama White House, examined recent commuter rail agreements in other cities, as well those on Amtrak. LIRR’s offer did not stack up well. So the PEB recommended in December 2013 that LIRR offer to its unions a six-year contract increasing wages by some 17%; but, for the first time, LIRR contract employees begin sharing health-care insurance premiums beginning with 1% of wages and escalating to 2.25%. Simon deemed the recommendation acceptable, but LIRR rejected the PEB recommendation, leading to appointment by the White House of a second PEB.

In proceedings before that second PEB, LIRR management’s last final offer was for an 11% increase over six years, with 2% of annual wages paid back to cover the cost of employer-provided health care insurance.

On May 20, the second PEB chose labor’s last final offer as most reasonable, with the carrier rejecting it as the basis for a voluntary settlement.

Thus, with no agreement in sight, and under provisions of the RLA, a lawful strike could commence on LIRR in mid-July, and media outlets already are abuzz on the economic calamity that could ensue when almost 300,000 weekday riders of LIRR are stranded.

Now let’s talk about labor’s chief negotiator, Anthony Simon, 49 years old, a Long Island native from gritty Queens, who began his LIRR employment in 1990 as a car cleaner, later rose to conductor, and who has been elected to ever higher union leadership posts since 1997.

Among union officers who too often reason and speak as if they recently fell off the turnip wagon, and dress as if they shop for clothing at rural garage sales, Simon exhibits the polish of a newly minted assistant district attorney with a Brooks Brothers charge card (see photo).

But we know of used-car salesmen who dress as GQ models and possess a gifted tongue. Where Simon distinguishes himself is his understanding of the political and media theater. There are few political events on Long Island where Simon is not seen in the company of a local or state elected official, congressman, or U.S. senator. That’s not bad for a fellow who began work as a car cleaner—a fellow now known to clean the clocks of management negotiators possessing Ivy League law pedigrees or possessing advanced degrees in industrial relations or economics.

Simon also skillfully managed the public relations fallout of a massive disability fraud among LIRR employees. He distanced his union (UTU-SMART) and its current leadership from the cesspool of dozens of thugs—many now in jail, on probation, and/or making restitution—who fraudulently claimed post-retirement disability benefits in a scandal uncovered by The New York Times and allegedly unseen until then by railroad officials or the Railroad Retirement Board.

As for the pending LIRR strike, sources indicate Simon has reached out to Long Island opinion leaders and decision makers to assure them that if LIRR declines to settle along recommendations of the two PEBs, he will not strike the railroad before Labor Day, thus protecting the summer-season revenues of resorts and restaurants chock-a-block along Long Island’s southern shoreline.

And after Labor Day and before Election Day? Where freight railroads have most frequently been the favored recipients of congressional action following a national freight railroad strike, Simon, ever driven by pluck, has been busy identifying and even widening the wedge between congressional Republicans—who control the House—and New York Democratic Gov. Andrew Cuomo.

Indeed, many congressional Republicans would enjoy embarrassing Cuomo, up for reelection in November, by permitting—or at least subtly so threatening—a post-Labor Day commuter railroad strike to continue without congressional action to halt it on terms beneficial to management.

Conservative GOP leaders bristle at what they see as anti-business actions by Cuomo when he was New York’s attorney general, and now deride him as an opponent of fracking and as a supporter of liberal social issues. As The New York Times reported, “[T]he state’s Republican Party may have . . . found a talking point: comments by the governor that candidates who are ‘extreme conservatives’—which he [Cuomo] defined as pro-assault weapon and anti-abortion—have ‘no place in the State of New York.’”

Meanwhile, Democrats in the House—especially those beholden to organized labor—will be none too anxious to side with LIRR management against LIRR unions. Those Democrats recognize that New York labor unions, in general, have no affection for a Democratic governor who, in the words of one rail labor leader, “put the freeze on public employee unions and encouraged the same for rail labor unions.”

For the Dashing Dan commuters on LIRR—as the railroad once called its patrons—they are pawns in a high-stakes chess match between labor and management. Given the generalship of Simon so far, the railroad may have no choice but to settle-up as two PEBs have recommended they do.

For sure, neither MTA management, which has been in charge of negotiations, nor the Albany politicians who have sent them bargaining instructions, have been a match for Anthony Simon, who now has them in check—and checkmate may soon follow.

Click this link to see a video of Anthony Simon at a March 5, 2014 TWU-sponsored press conference.

(Frank N. Wilner, an economist, is author of Understanding the Railway Labor Act, available from Simmons-Boardman books at http://www.transalert.com/cgi-bin/details.cgi?inv=bkurla&cat=18)