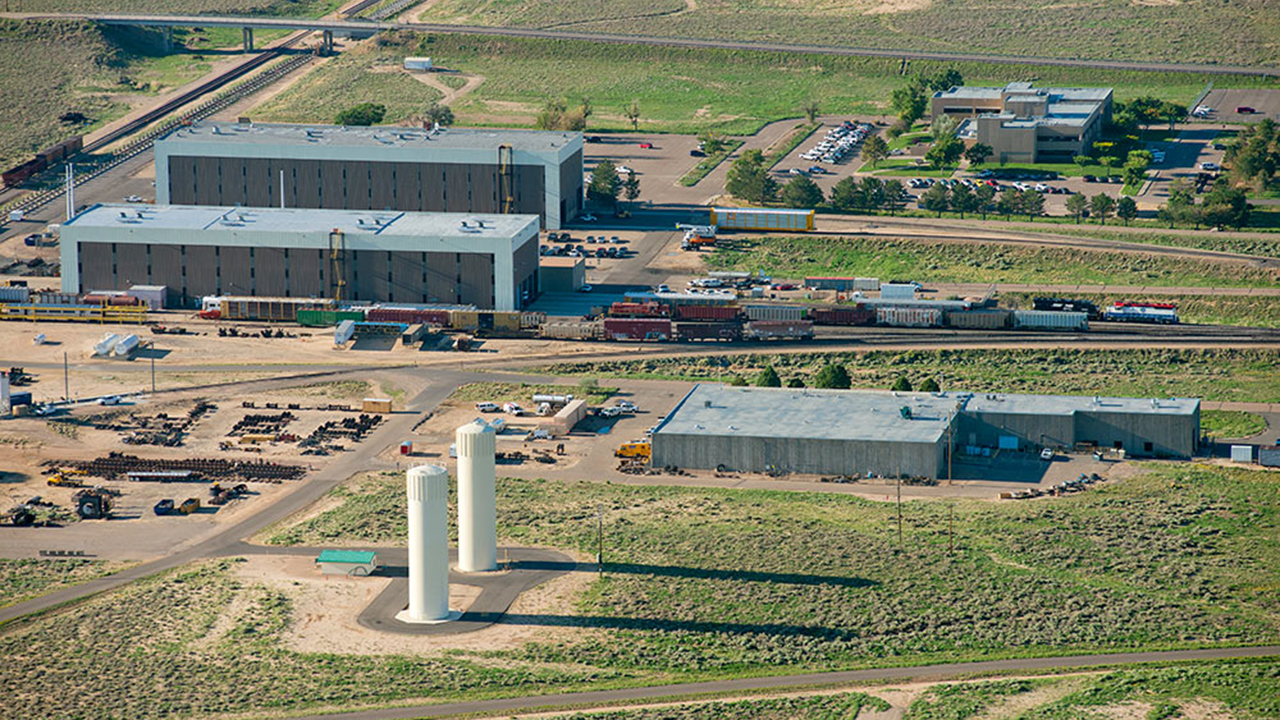 A short drive east of Pueblo, Colo., north of the Arkansas River, flanked by the Sangre de Christo Mountains, and surrounded by shortgrass prairie, lies the Transportation Technology Center, the Federal Railroad Administration’s rail testing facility. TTC’s 50 miles of test track and rail equipment testing facilities—and the people who run them—have produced some of the nation’s most significant rail safety and efficiency innovations.

TTC is owned by the U.S. government. The U.S. Department of Transportation (DOT) has leased the land for the facility from the state of Colorado and owned the buildings, track and special equipment since construction of the site in May 1971. For the past 40 years, the Association of American Railroads (AAR) and its subsidiary, Transportation Technology Center, Inc. (TTCI, now MxV Rail), managed the facility for FRA under contract. That partnership was a vital one and provided the foundation for many advancements.

TTC now begins its second half-century serving the rail industry with a new contractor that is assuming management of the site and a new directive for its development. As many Railway Age readers know by now, ENSCO, Inc. was selected to operate TTC, and the new operating contract commences on October 1, 2022. Following the announcement of this change, FRA received many questions and comments throughout the industry indicating widespread confusion and concern about the facility and its future. FRA would like to dispel some misconceptions, address those questions, and explain what drove the change and how the site will evolve.

Among the questions raised: Why make this contract change now? How was the contract awarded? The answer to the first question: TTCI’s operating contract expires on September 30, 2022. To award the new contract for managing the facility, FRA followed a strict process specified in the Federal Acquisition Regulations.

Through the new contract, FRA seeks to expand government use of the facility. The agency asked potential operators to specify how other DOT modal agencies such as the Federal Transit Administration (FTA), Federal Highway Administration (FHWA) and other federal agencies like the Transportation Security Administration (TSA) might use the premises, permitting more collaborative research and training. A Federal Source Selection Evaluation Board (SSEB), which included government evaluators outside FRA, conducted a painstaking review of all the proposals in relation to the evaluation criteria set forth in the RFP (request for proposals). The SSEB determined that ENSCO provided the most responsive proposal to concurrently expand TTC’s capabilities while continuing to support world-class railroad research.

Since the selection of ENSCO was announced, a lot has been said about the safeguarding and protection of proprietary information and data. For its part, FRA has always preserved the integrity of intellectual property and striven to ensure the confidentiality of research findings associated with it. We will continue to fully respect intellectual property ownership and maintain all appropriate confidentiality protections. Furthermore, FRA will only receive data and technical results from DOT-funded research.

To be clear, all data from industry sponsored research activities will remain the sole intellectual property of the entity who funds it. Although FRA is placing more emphasis on collaborative government research at TTC, ENSCO will also work directly with commercial partners independently, as well as with universities and others seeking to advance the art and science of railroading.

To allay concerns about the future of the site, rest assured TTC will remain an exceptional proving ground and research laboratory. The test tracks the industry has come to know and rely upon will continue to function and likely expand. They include:

While TTC has focused almost exclusively on railroad research since its establishment, the new era at the locale will usher in more uses. Among other agencies interested in undertaking work there is the Pipeline and Hazardous Materials Safety Administration (PHMSA). FRA anticipates that new proposed test beds and capabilities will enable work on autonomous inspection and nondestructive testing technologies. Also, new grade crossing research using vehicle-to-everything (V2X) communications will bring highway safety researchers and vendors to the facility. Combining test beds and research from different transportation modes can provide government security agencies such as the TSA and the Department of Defense a controlled environment to identify and mitigate vulnerabilities, and a one-stop-shop for training activities.

Recognizing the value of on-site instruction, in 2016 FRA transitioned some of its own internal training for our safety inspectors and specialists to TTC. FRA’s Technical Training Standards Division focuses on six core railroad safety technical disciplines that correspond to regulatory oversight jurisdiction:

The added value of training in an operating railroad environment cannot be overstated. Those undergoing training can easily transition from a classroom setting to field exercises or demonstrations where they can apply recently acquired knowledge. Additionally, co-locating training with the FRA Office of Research, Development and Technology (RD&T) provides other opportunities for cross-functional, hands-on learning about new and emerging rail technologies.

The open prairie outside Pueblo has come a long way since the 1960s. Out of a modest plan hatched from President Lyndon Johnson’s Great Society, the Transportation Technology Center evolved into a global forerunner in rail technology development and innovation. Now it is maturing and evolving for the next generation, while remaining a world-class facility for the advancement of transportation technology. It is a testament to what is possible when a government and its people show a continuing commitment to scientific research.

Dr. Maryam Allahyar Wyrick leads FRA’s Office of Research, Development and Technology. She has more than two decades of diverse experience as a research scientist in academia, the U.S. Department of Defense, the National Transportation Safety Board (NTSB), and U.S. Department of Transportation. She served as a research psychologist at the Naval Weapons Test Center in China Lake, Calif., followed by more than four years as a Human Factors Technical Expert at the United States Air Force Flight Test Center at Edwards AFB, California. She is a former human performance investigator for the NTSB, and prior to joining FRA, she worked as a senior research psychologist for the Chief of Staff of the Army at the Pentagon. Dr. Allahyar Wyrick has a Ph.D. in Cognition from the University of Washington.

Sean Woody is Chief of the Track Research Division in FRA’s Office of Research, Development and Technology. His team of Program Managers initiate and develop projects that address the most pressing safety needs of the railroad industry, and also oversee FRA’s Transportation Technology Center. Sean joined FRA in 2020 following a 29-year career at Norfolk Southern, where he held various positions in the Research and Test Department, primarily focusing on safety, inspection and operations issues in the Transportation, Engineering, and Mechanical Departments. Woody graduated from the University of Tennessee with a B.S. in Materials Science and Engineering. While at NS, he completed a M.S. in Materials Science and Engineering from the University of Virginia and was certified as a Six Sigma Black Belt.