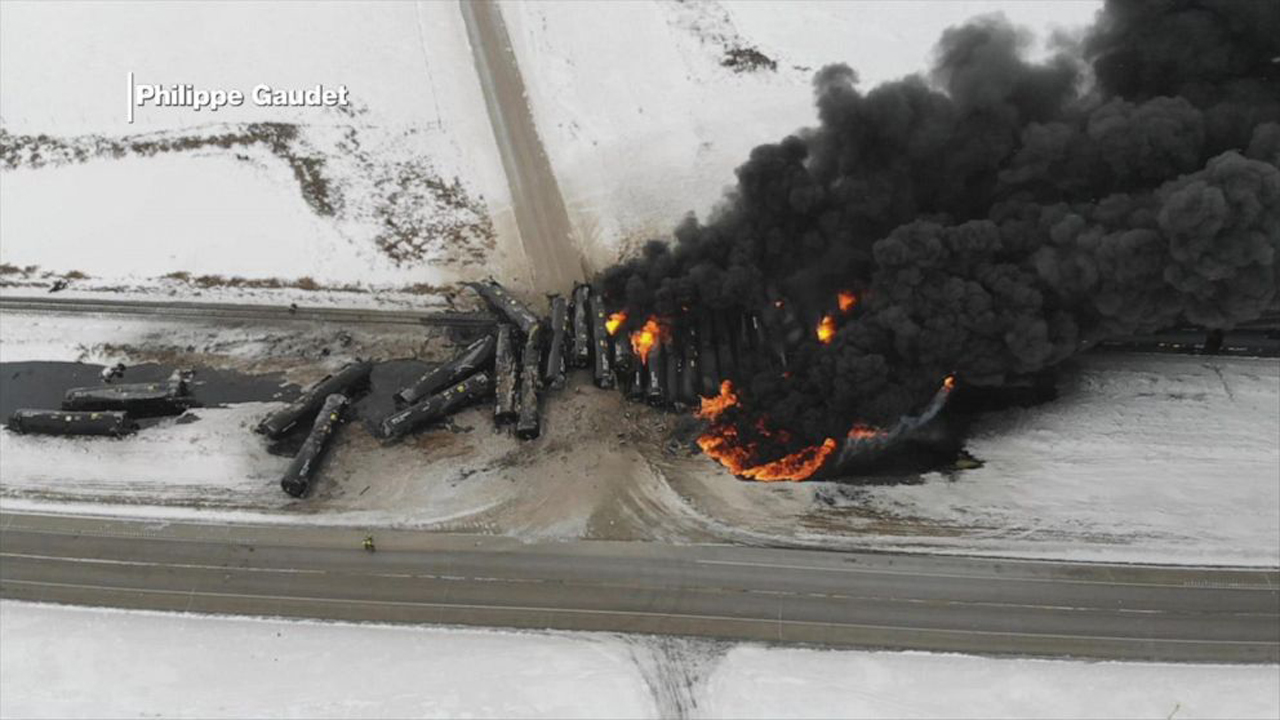 Following a second unexplained derailment and rupture-caused explosive fire of a crude oil train in rural Guernsey, Sask., Transport Canada ordered Feb. 6 a 25-mph limit on the speed of oil trains, dropping in metropolitan areas to 20 mph. The Federal Railroad Administration is monitoring Canada’s investigation to determine whether additional regulatory measures should apply once those oil trains cross the border on their way to U.S. refineries. As well, CN has embargoes, for 30 days, permits for certain TIH (toxic inhalation hazard) trains, citing the slow order’s impact on its network.

Transport Canada’s mandatory slow order applies to all trains carrying 20 or more crude oil tank cars and persists for 30 days. The order followed by a few hours the derailment of a Canadian Pacific oil train, less than two months after a similar derailment and explosive fire in the same area. CP, for its part, announced it had already slow-ordered all of its oil trains immediately after the Feb. 6 incident “as a precautionary measure as it gathers facts related to this incident.”

“Until we better understand the facts relating to today’s incident, it is prudent to operate with an abundance of caution,” said CP CEO Keith Creel. There were no injuries to the crew; CP said there is no impact to waterways. About 85 nearby residents were evacuated due to air quality concerns.

Extreme cold weather is a prime suspect. It is well understood that brake line connections leak when rubber hoses and seals freeze and metal fittings shrink. Rails contract under stress and become brittle.

The Transport Canada slow order will frustrate the province of Alberta’s campaign to increase the flow of crude oil by rail to U.S. destinations. Alberta bitumen is a thick tar that is diluted by up to one-third with naptha or other low-value petroleum gases to make it liquid enough to load into tank cars. It is such diluent that makes the bitumen shipments explosive.*

The tank cars in the accident were new TC-117J (U.S. DOT-117J) cars, which meet or exceed Transport Canada standards, spokespersons for CP and customer ConocoPhillips confirmed Feb. 7 to the Canadian Broadcasting Corp. TC/DOT-117Js are built new to HM-251 standards, with a tank shell thickness of 9/16-inch, 1/8-inch thicker than a TC/DOT-117R (rebuilt), which is retrofitted to meet THM-251, with a 7/16-inch tank shell thickness.

A spokesman for the FRA said the agency is examining all of the circumstances of the Feb. 6 incident: “FRA is in the process of gathering information from Canadian investigators about the circumstances of today’s CP derailment. We are actively engaged with the Transportation Safety Board of Canada, Transport Canada and CP to obtain relevant information and data on all potential contributing factors. Once we have had the opportunity to evaluate that information and data, FRA will determine if additional safety measures or precautions for the movement of such shipments are needed.”

On Feb. 7, CN announced to customers that it has embargoed permits on TIH, Crude Oil and Propane traffic, for 30 days, citing that the slow order “will have a material impact on our overall capacity unless we take steps to protect network fluidity.”

*Tank cars themselves do not explode. If ruptured/breached/punctured in a derailment, the crude oil in the car spills out. The oil, if diluted with volatile materials like naptha, can explode if ignited. Metal-to-metal contact, such as what occurs in a derailment with a rupture, creates sparks that can be the ignition source.