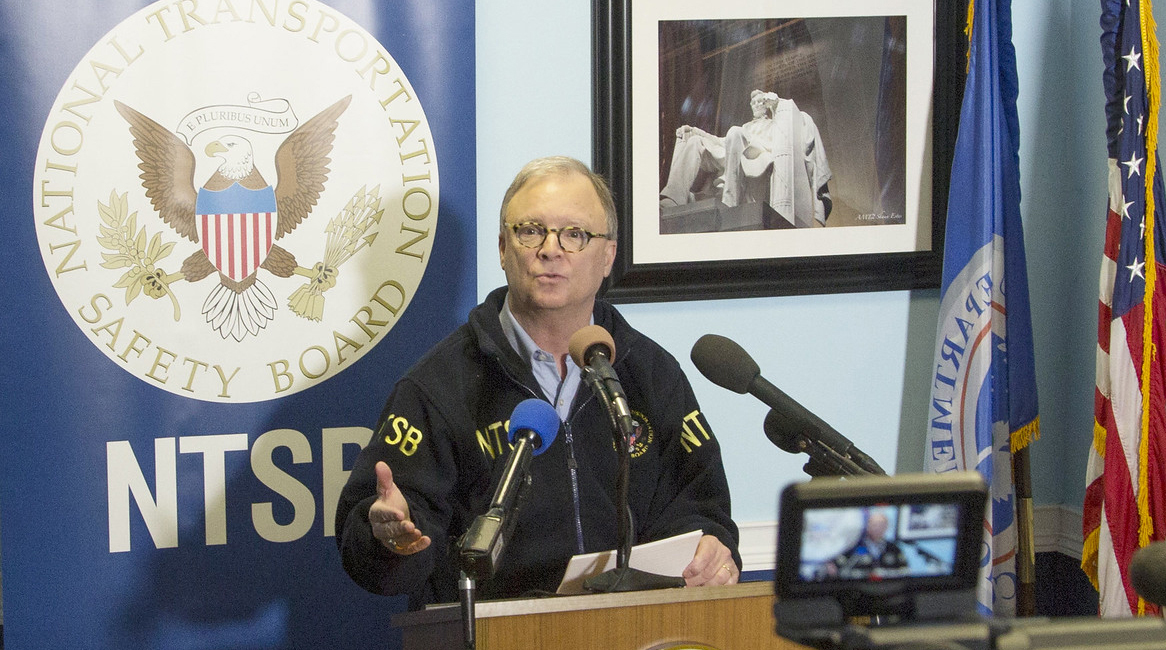 National Transportation Safety Board Chairman Robert L. Sumwalt retired from government service On June 30, 2021, following nearly 15 years at the NTSB. His tenure as the agency’s 14th chairman began in August 2017. Vice Chairman Bruce Landsberg will serve as Acting Chairman until a new chair is confirmed by the Senate. President Biden nominated NTSB Member Jennifer Homendy May 20 to become the NTSB’s 15th chair.

Sumwalt came to the NTSB in August 2006 with his appointment as the 37th member of the agency. He served seven years as Vice Chairman for seven years. Before joining the NTSB, Sumwalt was a pilot for 32 years, including 24 years with Piedmont Airlines and US Airways, accumulating more than 14,000 flight hours. During his tenure at US Airways, he worked on special assignment to the flight safety department and served on the airline’s Flight Operational Quality Assurance monitoring team.

While highly skilled in airline safety, Sumwalt’s knowledge of railroads and his news media appearances following major railroad accidents and also talking about complex technical subjects like Positive Train Control have been criticized. For example, in an early 2019 appearance on a CBS 60 Minutes report on PTC in which he was interviewed by Lesley Stahl, Sumwalt’s answers to questions were, in the opinion of many observers, wrong and misleading:

Lesley Stahl: “It seems so obvious. It just seems so urgent that it’s almost unfathomable that [PTC] doesn’t get done.”

[NTSB Chair] Robert Sumwalt: “That’s why the NTSB is just flabbergasted that we still don’t have it more than 10 years after Congress mandated Positive Train Control.”

One issue has been the Federal Railroad Administration, FRA, the railroad’s regulatory agency, criticized in government reports for not vigorously enforcing the PTC mandate. We tried to talk to the agency but they declined our interview request. Its handling of PTC has been a source of frustration for Robert Sumwalt of the NTSB.

Lesley Stahl: “The regulatory agency, the Federal Railroad Administration, are they just not doing their job?”

Robert Sumwalt: “Well, we have issued recommendations to the FRA and they’ve not acted upon those.”

Lesley Stahl: “Why are they (FRA) so lenient with the railroads? Somebody told us that in his opinion they’re captive to the railroad system, to the industry.”

Robert Sumwalt: “The regulator needs to step up to the plate and do [its] job and regulate.”

“Robert Sumwalt is flabbergasted?” Railway Age Editor-in-Chief William C. Vantuono said in an editorial. “I’m flabbergasted that he would make such irresponsible, uninformed and damaging comments. What was he thinking? If Sumwalt would like to respond in this space, I’ll be glad to publish his comments.”

Sumwalt never responded to Railway Age. More than two years after CBS’s report aired, Vantuono says he “remains incredulous as to how Sumwalt could get away with spreading nonsense like this, and that Lesley Stahl believed the lines of malarkey Sumwalt and others who appeared on that program fed her. It only proved how little people outside the rail industry know about it—even those who are supposed to be experienced journalists. The railroads and others were partly to blame for the 60 Minutes hatchet job, since they, as I pointed out, refused to go on camera. But that doesn’t justify Sumwalt’s “performance.’”