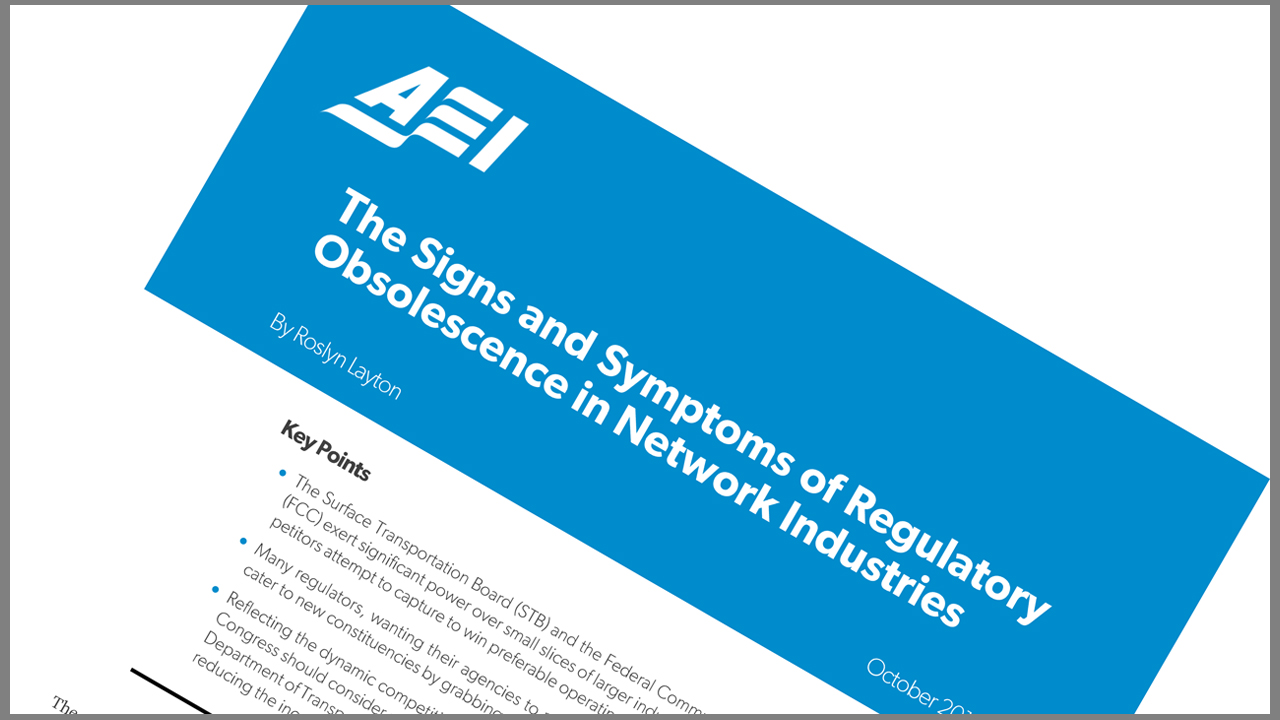 One expects better from the scholarly American Enterprise Institute (AEI), which on Oct. 9 published an essay recommending folding the independent Surface Transportation Board (STB) into the politicized Executive Branch Department of Transportation (DOT).

Should there not be troubling concern of an agency charged with railroad economic regulation being obedient to the impulses of President Donald J. Trump, perhaps the unease of the agency under the fancies of wannabe President Elizabeth Warren or Bernie Sanders is. And shudder at whims incubating within other Oval Office aspirants.

The reality is that Executive Branch agency leadership serves at the pleasure of a sitting President, while independent agency top officials—such as Senate-confirmed STB members—serve fixed terms, and may be removed only for narrowly defined cause.

If the notion of AEI is that 132 years of economic regulatory precedent by the STB and its predecessor Interstate Commerce Commission (ICC) be shredded in furtherance of Adam Smith “invisible hand” ambitions, then it is with a disturbing blind eye toward the probability a Warren or Sanders Administration—as opposed to a Trump Administration at war with all regulation—would restore the smothering regulatory overreach that sent most railroads highballing toward insolvency during the 1970s.

Significant among AEI’s reasons for scrapping STB independence in favor of Executive Branch control is an irrational argument about regulatory capture—that the regulated gain control of the regulator, perhaps through a revolving door of employment.

Such was advanced in 1970 by consumer advocate Ralph Nader, who focused on a list of rail regulators subsequently hired by the regulated. That hiring—almost exclusively by railroads—continues, with the list since 1970 significantly longer. But whether it constitutes regulatory capture is open for debate. What is established, however, is that special-interest political contributions—unbridled since the Supreme Court’s 2010 Citizens United decision—is ominously more apt to translate into political favoritism and transactional regulation.

AEI is embarking on a well-rutted path of muck as it is not the first to recommend diluting the independence of the agency regulating railroad economic activity. Notably, all previous efforts failed.

In fact, as recently as 2015, a Republican-controlled Senate granted the STB even greater independence via the Surface Transportation Board Reauthorization Act, which snipped even an impotent administrative obligation that STB budget requests enroute to Congress be shared with the Transportation Secretary’s office, where they most effectively served for the resting of coffee cups.

Although the ICC, upon its 1887 creation, was housed within the Executive Branch Interior Department, President Benjamin Harrison, a former railroad attorney, successfully encouraged Congress two years later to designate the ICC an independent agency, freeing it from Executive Branch political influence in its quasi-judicial and quasi-legislative role regulating railroad rates and service and ruling on railroad merger and line abandonment applications.

In June 1921, when President Warren G. Harding personally confronted ICC Chairman Edgar Clark over a decision permitting freight rate increases, there is no evidence Harding was given more than a polite reception.

In 1935, when President Franklin D. Roosevelt demanded the ICC clear its budget requests and legislative recommendations with the White House prior to sending them to Congress, ICC Chairman Joseph B. Eastman declined, writing FDR that “there are few things more important than to keep … independent establishments absolutely free from political influence, and to preserve for them the character of institutions that can be depended upon for honest, well-informed, disinterested and independent opinions on matters in which we specialize.”

A 1937 legislative attempt to fold the ICC and other independent agencies into Executive Branch agencies—with the ICC termed “a headless fourth branch of government”—failed to gain lawmaker support.

During the 1960s, President John F. Kennedy—sensitive to resultant congressional displeasure—retreated from an effort to exert political control over the ICC by demanding monthly reports be sent to him detailing internal deliberations.

While President Richard M. Nixon gained a prize in 1972 of giving the President authority to name a permanent ICC chairman, there was no accompanying authority for the President to remove the chairman—or any ICC member—unilaterally. In fact, dating to 1887, no ICC or STB member has ever been so removed from office. This contrasts with frequent changeout by Presidents of Executive Branch Cabinet and other senior officers.

As for the Executive Branch DOT, it has no legislative authority to interfere with STB decision-making, although it may—as with any public or private party of interest—file comments that are placed in the public record, as are communications from members of Congress.

In fact, the 1976 Railroad Revitalization and Regulatory Reform (4-R) Act forbade Executive Branch officials, such as the Transportation Secretary or White House Office of Management and Budget (OMB), from interfering with ICC communications with Congress as to budget requests and legislative recommendations. When the OMB in 1981 demanded a review of pending ICC rulemakings, the ICC declined, and the Reagan Administration retreated.

Surely lurking in the AEI essay is a festering desire—especially among rail shippers, and, more recently, among some large railroads—that the independent STB and its ICC predecessor have been too lenient in permitting railroad mergers.

Removal of rail regulatory functions to DOT would likely result in bifurcation, with authority over railroad merger applications given the Executive Branch Justice Department, which, in reality, is more subject to political influence. Indeed, it is alleged that the current Attorney General considers his role more as the President’s defense counsel than representing the American public.

Regardless of who regulates railroad economic activity, the tension built into the statutory instructions is to balance the objectives of assisting railroads in attaining revenue adequacy—to attract capital to maintain, replace and modernize plant and equipment—against ensuring that rates paid by shippers lacking effective transportation alternatives to rail are reasonable.

While the statute also provides that the make-up of the STB (and ICC before it) allow a majority of membership to the political party controlling the White House, and allows the President to name a permanent chairman from among already Senate-confirmed members, there is no evidence that political favoritism has infected ICC or STB vote-making.

And while Democrats and Republicans may hold to different economic theories, the number of regulatory decisions affecting railroad economic actions has overwhelmingly seen ICC/STB members of both political parties in voting agreement. To expect similar mostly non-partisan results from an Executive Branch agency, where the leadership is beholden to the President, is a fool’s errand.

The late Nobel laureate (for literature) Toni Morrison wrote, in “Song of Solomon” of being “on the thin side of evil and trying not to break through.” Indeed, handing railroad economic regulation to a politically motivated Executive Branch is surely an equivalent of actually breaking through a thin side of political evil. It’s called transactional decision-making. AEI should know better.