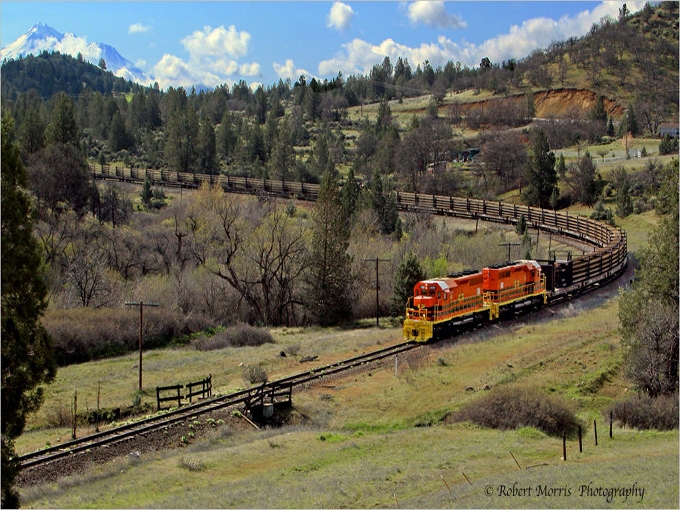 Construction is under way on the first of three phases to upgrade the CORP (Central Oregon & Pacific) Siskiyou rail line; work will begin this spring and summer to reopen the 95-mile line between Ashland, Ore. and Weed, Calif. The 389-mile CORP is a Genesee & Wyoming subsidiary.

The estimated $95 million project, which will rehabilitate about 65 miles of the corridor including rail and ties, minor repairs to 32 bridges and Tunnel 14, is being made possible by a $7.1 million federal TIGER (Transportation Investment Generating Economic Recovery) IV grant. The grant was given to the Oregon Dept. of Transportation (ODOT), southern Oregon counties and private industry and Siskiyou County, Calif. for significant improvements to the Siskiyou rail line, which has not been used since 2008. No funds outside the TIGER IV grant were requested from other public entities; G&W/CORP has agreed to provide a 25% match to the project.

When complete later this year, the Siskiyou rail line will connect the CORP main line (former Southern Pacific) to the Union Pacific main line at Weed, Calif. “Opening this line will provide faster service and additional transportation options for the delivery of southern Oregon lumber and manufactured goods to national and world markets by avoiding the need to travel by rail north to Eugene to connect to the UP main line,” ODOT said. “Currently, regional manufacturers must rely on interstate trucks or railcars sent to and from Eugene to join the UP main line. This costs valuable time and money, depending on the chosen transportation mode.”

Improvements on this section of line in southern Oregon and northern California “will renew and improve interstate freight rail options and business competitiveness and help retain and increase regional employment to manufacturing and wood product industries that provide family-wage jobs,” ODOT said. “In addition, rail service has been shown to be both safer and more efficient, reducing congestion by 3.5 trucks for each rail car used.”

“This route was part of the original Southern Pacific main line between Oregon and California, completed in 1887,” notes Railway Age Contributing Editor Bruce Kelly. “It was an extremely challenging piece of railroad, with a rollercoaster profile of numerous steep grades, most notably the crossing of the Siskiyou Mountains just north of the Oregon/California border. Reaching this 4,130-foot summit from either side involved climbing grades as steep as 3.1%. That, together with exceedingly tight curves and generally slow going, prompted SP to build a faster and more efficient Oregon-California main line further inland in the 1920s via Klamath Falls. SP continued to operate the Siskiyou Line as a secondary route for Pacific Northwest traffic; by the 1980s it was mainly used by locals and manifests hauling a large volume of timber products. SP eventually suspended through traffic over the Siskiyou Mountains, and in December 1994 SP sold the majority of the route to CORP. Less than two years later, SP itself was merged into Union Pacific. CORP resumed service over the Siskiyou Mountains initially, but then closed that segment again in 2008 due to high maintenance and operating costs.”