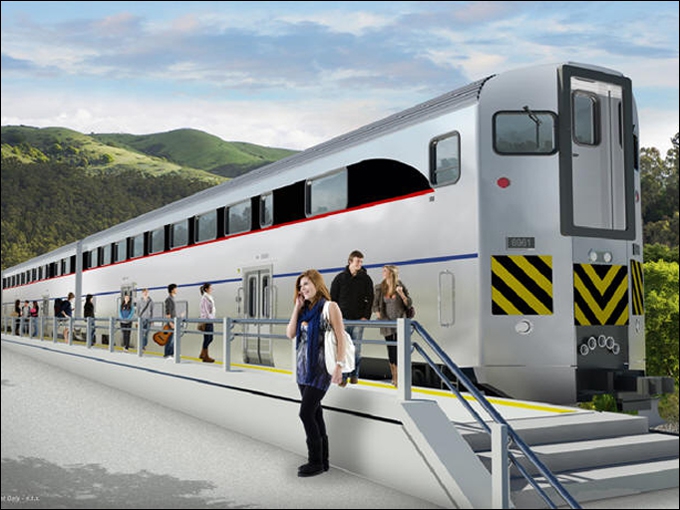 This is the caption for slide 1

Confirming a change by its contract partner, Caltrans amended its $317-million contract for new passenger cars, replacing Nippon Sharyo with Siemens, which will join with Sumitomo Corp. of America to fulfill the delayed multi-state order. Other details of the order were changed as well.

The newly-finalized contract will supply 137 single-level passenger railcars – 49 to Caltrans and 88 to the Illinois Department of Transportation. Under the original terms of the deal, Sumitomo had subcontracted construction of bi-level cars to Nippon Sharyo of Japan. The revised pact substitutes Siemens as a subcontractor, changes specifications to single-level cars, and accelerates delivery from five years to 24-34 months.

The IDOT contract with Nippon Sharyo dates to 2012, and was financed by $551 million in federal funds. But the order was jeopardized in 2015 when a prototype car failed to pass a mandatory crash safety test. In August of this year, IDOT announced that Siemens would replace Nippon Sharyo as subcontractor, and that it was changing specifications from bi-level to single-level cars.

Nippon Sharyo was building the cars in Rochelle, Ill.

“This contract is moving full-speed ahead and that is good news for Californians, both in terms of job creation and better passenger rail service,” said Caltrans Director Malcolm Dougherty. “Caltrans and IDOT are ready for these new railcars to provide additional seating capacity for our busy trains and support planned improvements to passenger service.”

All of the components will be sourced from U.S.-based suppliers in the 100% “Buy America” cars, to be constructed at Siemens’ manufacturing hub in Sacramento. Siemens is also building the SC-44 Charger passenger locomotive in Sacramento, as part of a similar multi-state order which includes Illinois.

“Siemens is excited to work with Sumitomo in their partnership with Caltrans and the IDOT,” said Michael Cahill, president of Siemens Rolling Stock. “These coaches will use the industry’s latest, proven rail technology to provide passengers with a safe, modern and highly comfortable ride.”

In California the new coaches will be used on the intercity Pacific Surfliner, San Joaquin and Capitol Corridor trains, and on Midwest Coalition service represented by IDOT.

The first cars are expected to begin production this year.