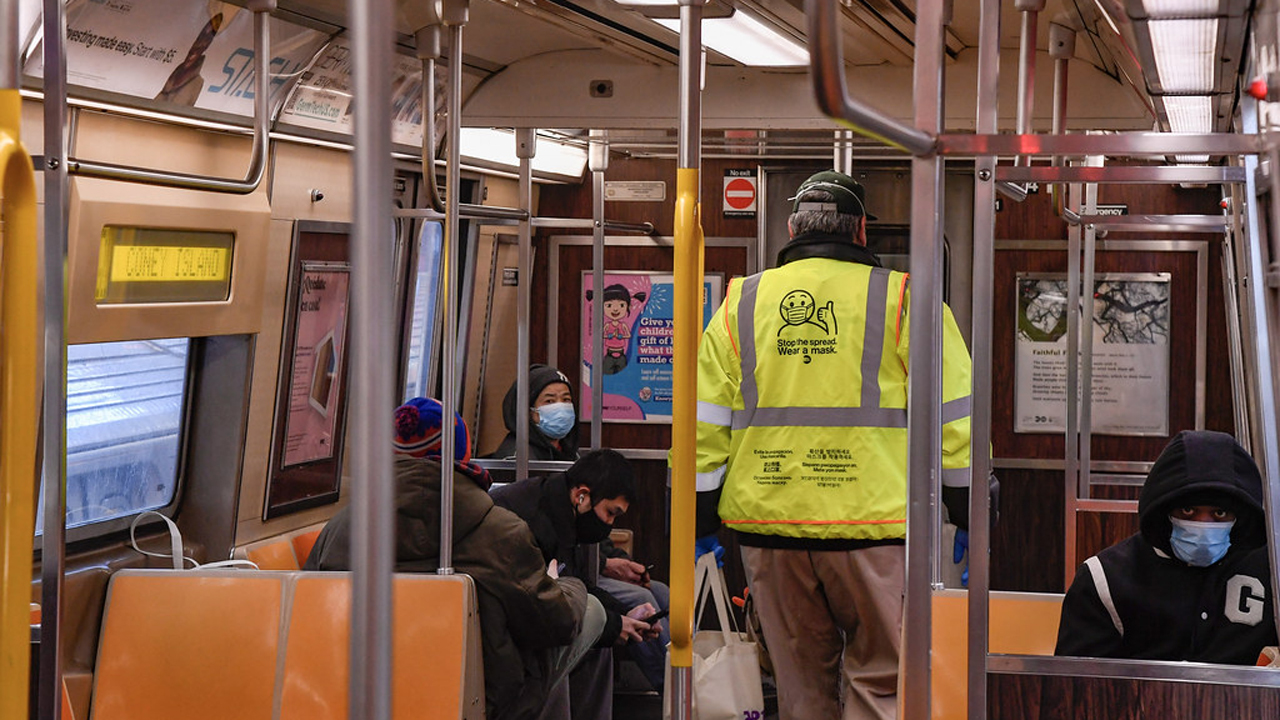 “We greatly appreciate that the bill includes $30.5 billion of emergency transit funding and distributes these funds in a manner that ensures that all public transit agencies can continue to be a lifeline for our essential workers,” American Public Transportation Association (APTA) President and CEO Paul P. Skoutelas said in a statement after the bill was passed March 6. (Marc A. Hermann / MTA New York City Transit)

The U.S. Senate has passed an amended version of H.R. 1319, the American Rescue Plan Act of 2021, providing $30.5 billion in emergency funding for transit and $1.7 billion for Amtrak.

The $1.9 trillion bill was passed by the U.S. House of Representatives on Feb. 27 and includes $500 million more for transit and $200 million more for Amtrak than what the House Committee on Transportation and Infrastructure’s Budget Reconciliation Title proposed last month.

It is also more than what was included in President Joseph Biden’s American Rescue Plan, which was unveiled Jan. 14 and supported a $20 billion investment to “protect the future of transit.”

“We greatly appreciate that the bill includes $30.5 billion of emergency transit funding and distributes these funds in a manner that ensures that all public transit agencies can continue to be a lifeline for our essential workers,” American Public Transportation Association (APTA) President and CEO Paul P. Skoutelas said in a statement after the bill was passed March 6.

Following are breakdown highlights of what the bill now provides for transit and Amtrak. (The funds would be available through fiscal year 2024)

• $26.09 billion for 49 U.S.C. § 5307 grants to urbanized areas. (No funding change from the original Budget Reconciliation Title). “The amount made available for these grants, combined with CARES Act and CRRSAA [Coronavirus Response and Relief Supplemental Appropriations Act] grants, ensures that urbanized areas receive 132% of their transit agencies’ 2018 operating costs,” according to APTA, which outlines the bill on its website.

• $50 million for 49 U.S.C. § 5310 grants for seniors and people with disabilities. (No funding change from the original Budget Reconciliation Title).

•  $2.21 billion for operating assistance grants to eligible recipients or subrecipients that, “because of COVID-19, require additional assistance for costs related to operations, personnel, cleaning, sanitization, and debt service payments incurred to maintain operations and avoid layoffs and furloughs.” (No funding change from the original Budget Reconciliation Title.)

• $1.675 billion for Capital Investment Grants under 49 U.S.C. § 5309. (An increase of $425 million from the $1.25 billion proposed in the original Budget Reconciliation Title). According to APTA, $1.425 billion is for specific New Start and Core Capacity projects. “It provides $1.25 billion to CIG project sponsors that have an existing Full Funding Grant Agreement (FFGA) (i.e., New Start or Core Capacity projects) and received a FY 2019 or FY 2020 CIG allocation,” the association reported. Separately, the bill provides $175 million to “CIG project sponsors that have an existing FFGA that received a CIG allocation prior to FY 2019,” according to APTA. “However, no project may receive more than 40% of the additional allocation of $175 million (i.e., $70 million).” Projects with grant agreements that are open for revenue service are not eligible for these CIG funds.

• The House-passed version of H.R. 1319 “allowed for projects in the Expedited Project Delivery Pilot Program to be eligible for funding,” according to APTA. “This specific provision was dropped from the Senate-passed version of the bill because it was subject to a Senate point of order under the Byrd rule.”

• $250 million for Small Start projects that are recipients of a CIG allocation or an applicant in the project development phase.

• $1.7 billion for Amtrak grants “to prevent, prepare for and respond to COVID-19,” according to APTA. (An increase of $200 million from the $1.5 billion proposed in the original Budget Reconciliation Title). The $1.7 billion includes $970 million for Northeast Corridor grants (originally set at $820 million in the Title) and $730 million for National Network grants (originally set at $680 in the Title). In addition, the bill sets aside $285 million to be available to Amtrak “in lieu of commuter rail and State-supported route payments” (same funding amount from the Title) and $166 million “to restore service on long-distance routes and to recall and manage furloughed employees” (same funding amount from the Title), APTA noted.

It’s anticipated that the House will consider the amended bill the week of March 7. If passed without further changes, it will be sent to President Biden, who is expected to sign it.

“We are grateful that the Senate passed the American Rescue Plan which includes more than $6 billion in federal funding for the MTA,” New York Metropolitan Transportation Authority Chairman and CEO Patrick J. Foye said in a March 6 statement. “This funding is crucial as we work to bring back ridership and recover from the pandemic. Critically, it will also further offset COVID’s impact and help protect against devastating service cuts and layoffs in the years ahead where we still face deficits.” He added: “We look forward to the House’s swift passage of this plan and President Biden signing it into law.”