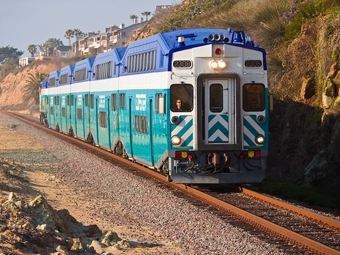 The San Diego Association of Governments’ (SANDAG) Board of Directors released the draft version of San Diego Forward: The Regional Plan, which provides the big-picture vision of how the region will grow over the next 35 years and an implementation program to make that vision a reality. The plan, which was released on April 24, 2015 will be open for public review and comment.

San Diego Forward incorporates the Regional Transportation Plan, Sustainable Communities Strategy, and Regional Comprehensive Plan into one overarching blueprint for the region’s future. The plan proposes a strategy for a more sustainable future, including investment in transportation projects that will provide more travel choices, protect the environment, create healthy communities, and stimulate the economy.

Expansion of the Oceanside – Escondido Sprinter commuter rail line is also proposed, with track-doubling and construction of an extension south from Escondido to Westfield North County.

“Over the last two and a half years, we have worked with community members, stakeholders, and local agencies to develop San Diego Forward: The Regional Plan,” said Santee Councilmember and SANDAG Board Chair Jack Dale. “The resulting Plan encourages the development of vibrant, healthy communities that are connected by a range of transportation choices, including public transit, walking and biking facilities, and roads.”

The plan responds to changes in overall land use patterns by the region’s local cities and the county, which envision more compact development in the future (with more than half the region preserved as open space), SANDAG said. These investments will directly support the regional economy, with every dollar invested in the Plan resulting in nearly two dollars of economic benefit.

Funding for these projects will come from various local, state, and federal sources and the strategy envisages around $US 204bn being made available for development of the region’s transport network in the period to 2050. SANDAG anticipates that 48% of this will be sourced locally with 34% coming from the state of California and 18% from the federal government.

Public comments on the Draft Regional Plan, which can be found via the following website: http://sdforward.com, will be accepted for a period of 55 days after the distribution of the Plan’s Draft Environmental Impact Report, anticipated for mid-May.