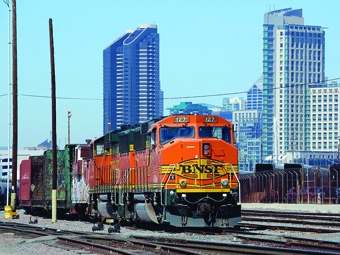 From a railroad standpoint, the reputation of San Diego, Calif., is first and foremost about passenger and transit service. Los Angeles-to-San Diego is Amtrak’s second-busiest corridor, with more than two million intercity passengers annually. That same corridor also carries close to four million commuter and other riders annually on Metrolink and Coaster trains. San Diego itself has light rail and streetcar service moving close to 122,000 passengers every weekday, ranking it fourth in ridership among U.S. light rail systems.

San Diego’s freight rail business, on the other hand, seems to take place in relative obscurity. It has what is essentially stub-end service from one Class I carrier, a connection via short line to a nearby Mexican carrier, and a potential new outlet to the rest of the U.S. that is currently undergoing its latest attempt at reconstruction.

BNSF derives much of its San Diego traffic from maritime connections. The ports of Los Angeles and Long Beach dominate the West Coast container market, but the Port of San Diego (POSD) claims its own advantage by specializing in break-bulk and roll-on/roll-off cargoes. POSD’s National City Marine Terminal handles the import and export of vehicles and heavy equipment, with a 140-acre on-dock facility that’s able to hold 120 railcars for automobile loading and unloading. Ten percent of imported cars in the U.S. come through National City.

POSD is also big on food. Its Tenth Avenue Marine Terminal has 300,000 square feet of on-dock frozen and refrigerated warehousing. And it does move containers: Dole Fresh Fruit containers that are discharged, cross-docked, and move as truckloads to northern California, Oregon, and Washington. As for bulk dry goods, POSD handles export bulk soda ash delivered by BNSF. Due to space constraints and storage restrictions, this service limited to less than 50 railcars at a time coming in or moving out.

In 2008, the Tenth Avenue terminal began receiving windmill generator components from Japan, and that business grew to include windmill products from Europe and South America. Most get trucked to one of the many windmill farms sprouting up outside San Diego, but a few shipments have traveled further inland by rail. Due to a change in cargo mix at Tenth Avenue, POSD can no longer transfer shipments of windmill components onto railcars, but can still handle rail shipments of other heavy equipment and machinery.

Additional automobile business is processed through a rail terminal located at BNSF’s San Diego yard. This site unloads inbound autoracks carrying domestically-produced vehicles, and also loads outbound vehicles that have been trucked in from a Toyota factory in nearby Tecate, Mexico.

As part of a statewide $2 billion Trade Corridors Improvement program, the California Transportation Commission in 2012 granted $25.9 million toward a $40.5 million total being invested in the San Diego area on upgrades to track, signals, and grade separations. The goal is to double rail freight capacity through the San Diego/San Ysidro/Tijuana border crossing, while eliminating as many as 31,800 truck trips annually.

San Diego & Imperial Valley Railroad (SDIY), a Genesee & Wyoming subsidiary, is the direct recipient of that international traffic. Its 13-mile line from San Diego south to the border terminal of San Ysidro, Calif., bridges the gap between BNSF and Mexico’s Baja California Railroad (BJRR). SDIY also handles minor freight traffic on a branch from San Diego northeast toward El Cajon. Both segments of SDIY’s operation are on trackage shared with San Diego Metropolitan Transit System light rail trains. BNSF interchanges an average of 15 cars per day with the SDIY. During 2013’s fourth quarter, SDIY moved 1,301 carloads, of which 1,119 were carloads terminating or originating in Mexico.

All of that could change, for the better, if current efforts to reopen a long-dormant rail line east of San Diego prove successful. In December 2012, the Pacific Imperial Railroad signed a 50-year lease (with an option for 49 additional years) authorizing it to make repairs and resume freight service on 70 miles of track known as “The Desert Line” between Division and Plaster City, Calif. When operated in conjunction with BJRR from Lindero west to Tijuana, and with SDIY from San Ysidro north to San Diego, this 130-mile route could offer what some consider is tremendous potential for international trade.

The trackage PIR proposes to operate has changed hands many times since opening in 1919. Best remembered as the San Diego & Arizona Eastern Railway (a subsidiary of Southern Pacific), this route followed the U.S./Mexico border eastward from San Diego to a connection with SP’s (now Union Pacific’s) southern U.S. corridor. Nearly half of the route deviated into Mexico to avoid high mountains east of San Diego, but there was no avoiding California’s Carriso Gorge, where numerous tunnels and trestles guided trains along a narrow, cliff-hanging right-of-way.

A hurricane in 1976 and winter floods during 1979-80 devastated portions of the SD&AE. SP repaired the route and sold it to the San Diego Metropolitan Transit Development Board. Trackage close to San Diego was developed for light rail, while a number of operators took their turn at handling freight business over the rest of the line. After wildfire destroyed two trestles in 1983, the track through Carriso Gorge went dormant for two decades.

In 2004, the Desert Line/Carriso Gorge segment of the SD&AE reopened to limited service. During the next few years, tunnel clearances were improved in an effort to attract doublestack container business as well as autoracks. But securing enough capital and customers to fully restore this second rail line to San Diego proved difficult at a time when there was growing interest in a proposed megaport at Punta Colonet, on the west coast of Mexico’s Baja California peninsula, about 150 miles south of San Diego. When the global economy declined, predictions for container volume through Punta Colonet declined as well. That, coupled with the immense cost of having to build 200 miles of completely new railway, led to a December 2012 announcement by the Mexican Ministry of Communications and Transport that it was shelving the Punta Colonet project.

Pacific Imperial Railroad says its Desert Line is “uniquely positioned to service approximately 800 manufacturing facilities in proximity to the rail,” including the Toyota factory near Tecate. Such commerce would enter the U.S. and move east via PIR to a connection with UP, or west via PIR’s connection with BJRR. Moving west would mean access to San Diego, as well as a potential reach to the Los Angeles area via BNSF. However, overhead trolley wire between San Ysidro and San Diego may pose a restriction against high-profile cars such as autoracks.

The desire to restore this international rail connection is strong on both sides of the border. Baja California Railroad was scheduled to begin $20 million in track improvements in Mexico during 2013. PIR, meanwhile, faces an estimated $100 million in track, tunnel, and bridge improvements of its own. In a fourth-quarter 2013 report, PIR said a subcontractor had begun work to clear sand, dirt, and other debris from the tracks between Division and Campo, Calif. Rail flaw detection and rail integrity testing was expected to follow.

Could PIR draw Dole and other container traffic eastward to populated markets like Phoenix and Tucson? Will it be approached by growers and manufacturers in Arizona’s Yuma County, who have been trying to develop a transportation hub with direct rail access to a Pacific port? The Desert Line seems like a logical choice for all of it, assuming PIR can promote its slower but more direct rail corridor between San Diego and Arizona (roughly 120 miles shorter than a BNSF/UP routing), and can compete against trucks moving along Interstate 8. PIR has said its initial focus will be cross-border business, which already presents abundant opportunity. If it decides to reach west for ocean trade as well, PIR will be knocking on some new doors. POSD says though its current rail volumes are handled efficiently to destinations served by BNSF, a rail outlet to the east “is always an interesting concept. Many challenges in terms of funding and commercial activity have to be overcome, but a more robust transportation system benefits everyone.”