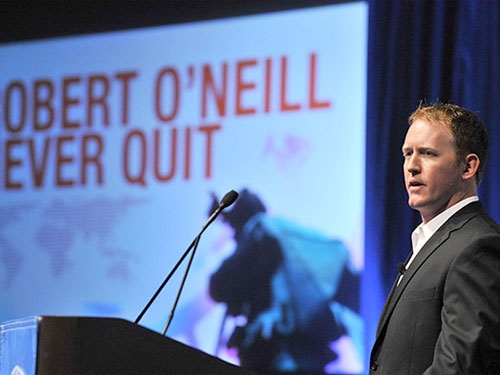 O’Neill held combat leadership roles in more than 400 missions in four different theaters of war. He has trained more than 800 special operations and tactical operators, and will share his unique expertise with Railway Interchange 2015 attendees. The veteran will translate his elite SEAL team training into high-impact, actionable insights on leadership, decision-making, operating in uncertain environments, and how to become the “best of the best.”

O’Neill will speak on the topic of his mantra, “never quit,” which he views as the single most important factor in determining success.

Said American Railway Engineering and Maintenance-of-Way Association (AREMA) Interim Executive Director and CEO Larry L. Etherton, PE, “We are thrilled and honored to have O’Neill for our keynote speaker at the Railway Interchange 2015 opening general session. I know that our more than 8,500 expected attendees will be inspired by his experience and will benefit from his advice on how to thrive in today’s competitive business climate.”

Registration is open for the combined exhibiton and conference, being held at the Minneapolis convention Center and at BNSF Railway’s Northtown rail yard nearby. The Railway Interchange 2015 exhibition showcases the latest technology, services, and research by members of the Railway Supply Institute (RSI), the Railway Engineering-Maintenance Suppliers Association (REMSA), and Railway Systems Suppliers, Inc. (RSSI).