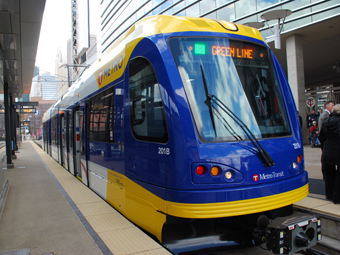 OK, one more leap into the briar patch of controversy over light rail transit (LRT) vs. Bus Rapid Transit (BRT), with a glance at diesel multiple-unit (DMU) light railway, and some observations about federal New Starts policies.

My last two blogs have focused on the results of a study my colleague Dave Dobbs and I performed — “Comparative examination of New Start light rail transit, light railway, and bus rapid transit services opened from 2000.” You can click here to access the study.

I presented the study in mid-November 2012 to the 12th National Light Rail Transit Conference in Salt Lake City, sponsored by the Transportation Research Board (TRB) and American Public Transportation Association (APTA). In this article, I’ll focus on some additional details from our study.

As discussed in my previous articles, our study sought — in comparing some recent LRT, BRT, and DMU light railway projects — to evaluate (1) whether there were major differences in capital cost per mile (km), (2) how closely final capital costs match projected/budgeted costs, and (3) how well ridership goals have been achieved.

In terms of capital cost, for “substantial” installations (5% or more of route length involving heavy civil works), LRT was a clear winner, with an average cost per mile of $80 million, less than a fifth of BRT’s average of nearly $452 million. (All costs in 2012 dollars.)

For the DMU light railway mode, we were able to access available, reliable data for only one project — North County Transportation District’s Sprinter line linking Oceanside and Escondido, California. At about $25 million a mile, Sprinter seems to come out ahead in the comparison — but keep in mind that, although there’s a lot of structure (bridges, viaducts), a significant proportion of the line is single-tracked, thus reducing its cost compared with double-track LRT systems.

In comparing raw capital cost, however, we also provided an important caveat that “simply comparing gross capital cost and ridership is insufficient in a fully effective comparative evaluation of any project.” That’s because — for starters — you need to (1) account for the different economic lives of systems and rolling stock (railcars typically have longer lives than buses), (2) consider both operating cost and total annualized capital cost, and (3) compare total cost per passenger-mile.

Where electric LRT really excelled was in achieving ridership goals. On average, LRT projects seemed to meet their ridership targets at about twice the rate of the BRT projects, using the “ridership achievement index” we developed for the study (which accounted for the pace at which projected ridership was being achieved).

It should be noted that some BRT projects didn’t do so badly — Cleveland’s “HealthLine” project (Euclid Avenue) was achieving its target at a 60% faster pace than expected, while Los Angeles’s Orange Line busway was reaching its ridership at nearly 3 times the projected rate.

But some of the LRT results were really spectacular. St. Louis’s St. Clair Extension of Metrolink, for example, was racing towards its ridership goals at over 7 times the predicted rate; Minneapolis’s Hiawatha line (pictured above) at six times; and Denver’s Southwest LRT at more than 6 times. (It should be noted that three out of the 20 LRT projects studied were failing to meet projected growth rate targets; nevertheless, the overall LRT average still exceeded BRT’s. Also, the Sprinter DMU project failed to meet its growth rate target.)

One of our major problems was that the data to adequately evaluate all aspects of projected project performance was not readily available, especially given the scope of our study. While we found some of the data we needed, and were able to produce some useful results, the more comprehensive implications are serious.

Although rail and bus New Start projects involve tens, perhaps hundreds, of millions of investment dollars, the lack of any consistent, standardized data reporting system makes evaluation difficult to impossible. Some projects neither clearly set nor divulge critical goals (like ridership targets), nor are key data reported even after the project is operational.

We found that streetcar project ridership targets often seem obscured or ignored. For LRT extension projects, crucial data — such as ridership and operating & maintenance (O&M) costs — are almost never made publicly accessible in a form separated out from systemwide LRT data.

But the biggest problems we encountered involved BRT projects. For example, ridership targets (if any) are rarely revealed publicly. Furthermore, BRT project ridership and O&M costs are typically blended with systemwide bus data, making it impossible to readily scrutinize the BRT project.

Federal Transit Administration (FTA) policy seemed at least partly culpable. We noted a huge disparity between the FTA’s relatively rigorous scrutiny of LRT projects vs. the comparatively facile approval of new BRT starts, which mostly seemed to be just “waved through” the approval process and handed funding, typically 80% of the total.

Our recommendations seemed to resonate with many conference attendees. These included a call for the FTA to establish consistent, standard evaluatory data criteria — and make data readily accessible for public scrutiny. And we urged that all such mammoth projects should establish ridership targets and report progress in meeting those targets for an extended period after each project is completed.

Our study seemed to expose some serious gaps in federal oversight. Will it have an impact? Only time will tell.