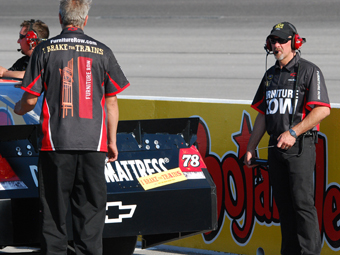 Following the finish of the May 12 Bojangles Southern 500 at Darlington Raceway, Regan Smith’s no. 78 Furniture Row Racing/CSX Play It Safe Chevrolet looked like it had been sideswiped by a freight train—which made his top-20 finish all the more impressive.

Actually, it was early contact at 180 mph with the infamous Darlington Raceway wall, as well as contact with another car on a restart, that damaged the 78—which otherwise ran like a high-speed locomotive all night. There were no problems with the racecar’s ECR (Earnhardt-Childress Racing) motor, which failed and threw a connecting rod through the engine block on lap 15 of the previous weekend’s race at Talladega.

Smith’s sharp driving skills and sheer tenacity, combined with a gritty team effort, lifted the 29-year-old racer to a 14th-place finish at Darlington, known as “The Track Too Tough To Tame” and “The Lady In Black.” Indeed the entire race, which Smith won in 2011, was an exercise in “overcoming continuous adversity,” as a team spokesperson put it. Smith’s strong showing in the 368-lap Southern 500 was his best finish of the season to date.

“We’ve had our struggles lately and to get a respectable finish is what we needed,” said Smith, whose previous best result was 15th at Las Vegas in March. “We kept our composure as we fought through a number of problems.”

The 78 was a battered machine when it took the checkered flag at the oldest and toughest venue on the NASCAR circuit. After qualifying ninth and running in the top 10 for the first 40 laps, Smith, informing his crew on the radio that the car was loose (oversteering) in the turns, smacked the wall, causing serious right-side damage to his car. But if collecting a “Darlington stripe” (regarded by many as a badge of honor—if you can recover and keep racing) early on wasn’t bad enough, Smith and the Furniture Row crew were later confronted with other issues.

“After we finally got the right side fixed where Regan could race the car at nearly full strength, we were faced with more problems,” explained crew chief Pete Rondeau. “We got boxed in on one pit stop and then our car suffered front-end damage when contact was made during a restart. Both incidents curtailed our efforts. But 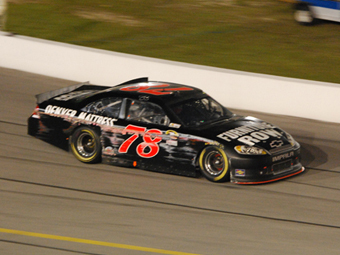 Regan kept his cool and drove a great race under difficult conditions and our crew guys did an excellent job not only with fast pit stops but also by repairing the car’s damage throughout the race. It was an all around team effort.”

Smith was also able to continue on after spinning on lap 307, which brought out the fifth caution of the evening.  “That spin was a little hairy, but we kept on going and never gave up,” stated Smith. (Editor’s note: His reaction to the spin on the team’s radio channel was an emphatic “son of a b____!!”)  That never-give-up effort paid off in the end when Smith took advantage of avoiding a late-race accident on the 1.366-mile oval by gaining several spots in track position. He then held his own during a tense two-lap green-white-checkered shootout.

“We found more speed in our Furniture Row Racing/CSX Play it Safe Chevy and that’s encouraging,” said Smith. “We came into the race looking for positives and we accomplished that objective. I am really proud of the way this team battled back.” Smith also gained in the driver point standings, moving from 27th to a tie for 25th.

The race winner was Jimmie Johnson. Rounding out the top 10 in order were Denny Hamlin, Tony Stewart, Kyle Busch, Martin Truex Jr., Matt Kenseth, Carl Edwards, Kasey Kahne, Marcos Ambrose, and Joey Logano. The next event is the May 19 Sprint All Star Race at Charlotte Motor Speedway. Smith has qualified for the annual classic as a result of winning last year’s Southern 500. 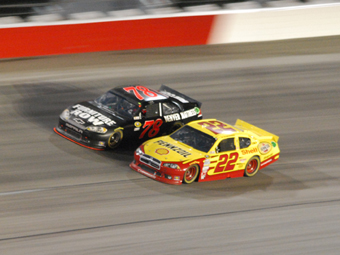 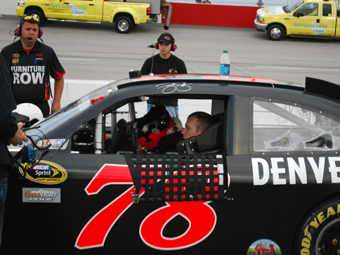 The next CSX-sponsored race is June 3 at Dover (Del.) International Speedway, the “Monster Mile.”