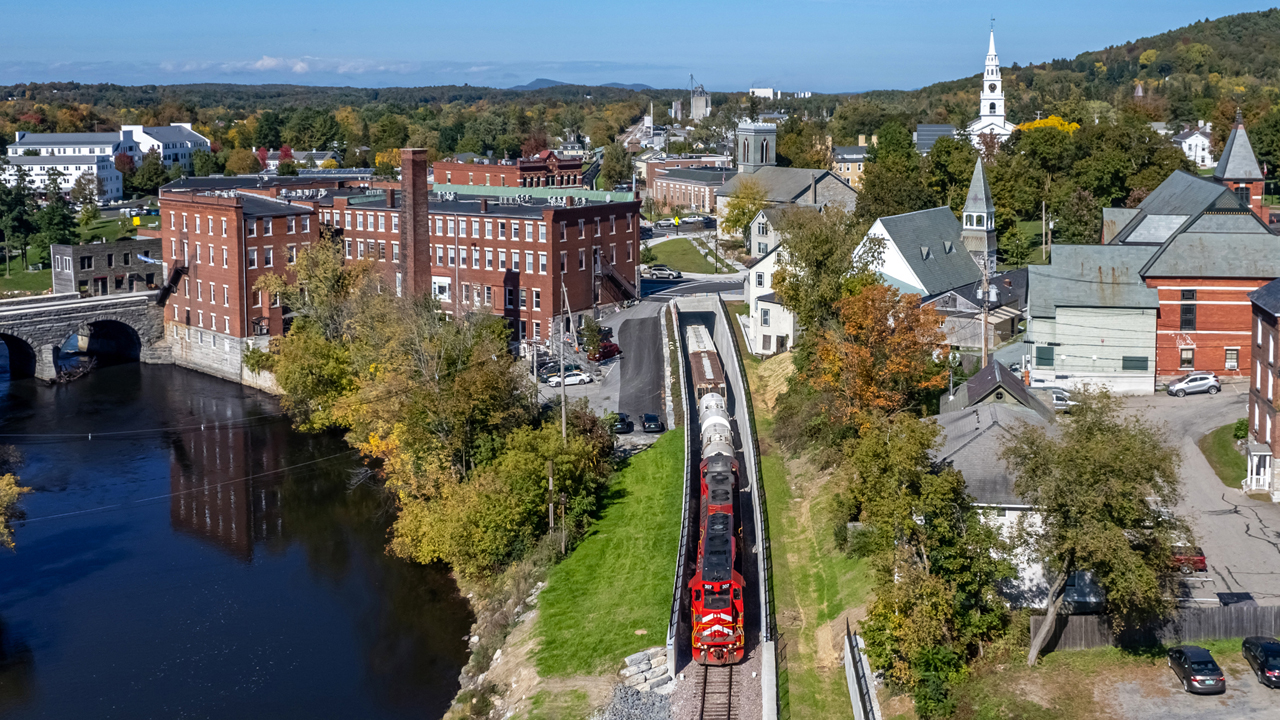 Vermont Railway (VTR) is the Railway Age 2022 Short Line Railroad of the Year.

Railway Age is honoring the Vermont Railway (VTR) and the South Kansas and Oklahoma Railroad (SKOL) as its 2022 Short Line (Class III) and Regional (Class II) Railroads of the Year.

Both carriers will be recognized at the American Short Line and Regional Railroad Association (ASLRRA) Annual Conference & Exhibition in St. Louis, Mo., May 1-3, 2022.

“This year’s winners have leveraged public-private partnerships and teamwork within their organizations and with other railroads to repair aging infrastructure and better serve customers,” Railway Age Executive Editor Marybeth Luczak says. “Both reflect the entrepreneurial spirit that short lines are known for. Railway Age Publisher Jonathan Chalon, Editor-in-Chief William C. Vantuono and I congratulate them for their continued success.”

“Our 2022 awards quickly follow our 2021 awards, which were given late last year when ASLRRA moved the annual conference to November,” says Vantuono. “We received many excellent entries for 2021, and rather than go back to the industry for nominations, we decided to choose our 2022 honorees from the 2021 pool.”

Vermont Railway (VTR)—part of the Vermont Rail System and Railway Age’s 2012 Short Line of the Year recipient—serves its namesake state and a portion of New York and New Hampshire.

In 2019, it embarked on an ambitious tunnel reconstruction project led by the state of Vermont, in conjunction with the town of Middlebury, New England Central Railroad (NECR), VHB, Kubricky Construction, Engineers Construction, and numerous other parties, following years of planning and design work. The Middlebury bridges, often referred to as tunnels, were built in the 1920s, and had become structurally deficient. They provided more than access over the railroad tracks; they tied together the downtown business district.

The VTR main line was out of service for 10 weeks during construction, which included severing 2,500 feet of track (see time-lapse project video below). To guarantee rail customers uninterrupted service, all traffic through Middlebury was diverted onto an alternate route that ran along the opposite side of the state. For close to a year prior to the shutdown, VTR had to adjust its daily train operations to accommodate the 20-hour work windows.

VTR, working closely with the Vermont Agency of Transportation (VTrans) and NECR, established a plan for two detour trains each day. The trains were powered by eight GMTX GP-38-2s leased by VTR and operated over NECR from Burlington to Bellows Falls; additional train crews were also brought in, and trained and qualified on both railroads. In some cases, partial off-loading or complete transloading of product from railcar to truck was required at VTR’s Riverside Reload Center in Bellows Falls, Vt., before cars could be accepted onto the detour route.

VTR had one important goal: No direct impact to customers. Thanks to years of planning and strong VTR-NECR communication, there were no customer complaints, VTR reports.

The project was a success—for VTrans, Middlebury, and VTR and its customers, who now enjoy state-of-the-art infrastructure that not only accommodates the “high and wide” shipments of tomorrow, but also significantly enhances a historic Vermont town, VTR says. It also helped pave the way for Amtrak’s service extension into Burlington.

Despite project complexity and pandemic-related challenges, “coming together for the common good” was key, VTR says.

To accommodate increased cement powder manufacturing along the line and customer demand for 286K loads, and to move larger volumes of grain with less equipment for customers, SKOL sought a CRISI Program grant to improve rail infrastructure. It enlisted help from the Watco team and sponsorship from the Kansas and Oklahoma departments of transportation to submit a request. In 2020, the Federal Railroad Administration awarded SKOL up to $27 million to upgrade track; replace rail, ties and ballast; and repair bridges and crossings, so 80% of the railroad, or more than 300 miles of track, could be brought up to 286K standards. The total capital project value, with matches from the railroad and the states of Kansas and Oklahoma: $41 million. Work began in 2021 and completion is slated for year-end.

SKOL says trip times for most trains will be cut by about half, and train speeds will increase from 10 mph to 25 mph on much of the upgraded track. Due in part to these improvements, Watco customer Bartlett Grain decided to build a $350 million soybean crushing facility along the line in Kansas.

Only weeks after the arrangement was under way, a fire damaged a 505 foot-long wooden trestle bridge in southeast Kansas, interrupting cement, rock and sand traffic, as well as grain product moves to the Port of Catoosa. SKOL again partnered with BNSF, and within days, had an agreement in place to keep cars moving.

The bridge repair, originally estimated to take 30 days, took only 16.

Both VTR and SKOL will be featured in Railway Age’s April 2022 issue.