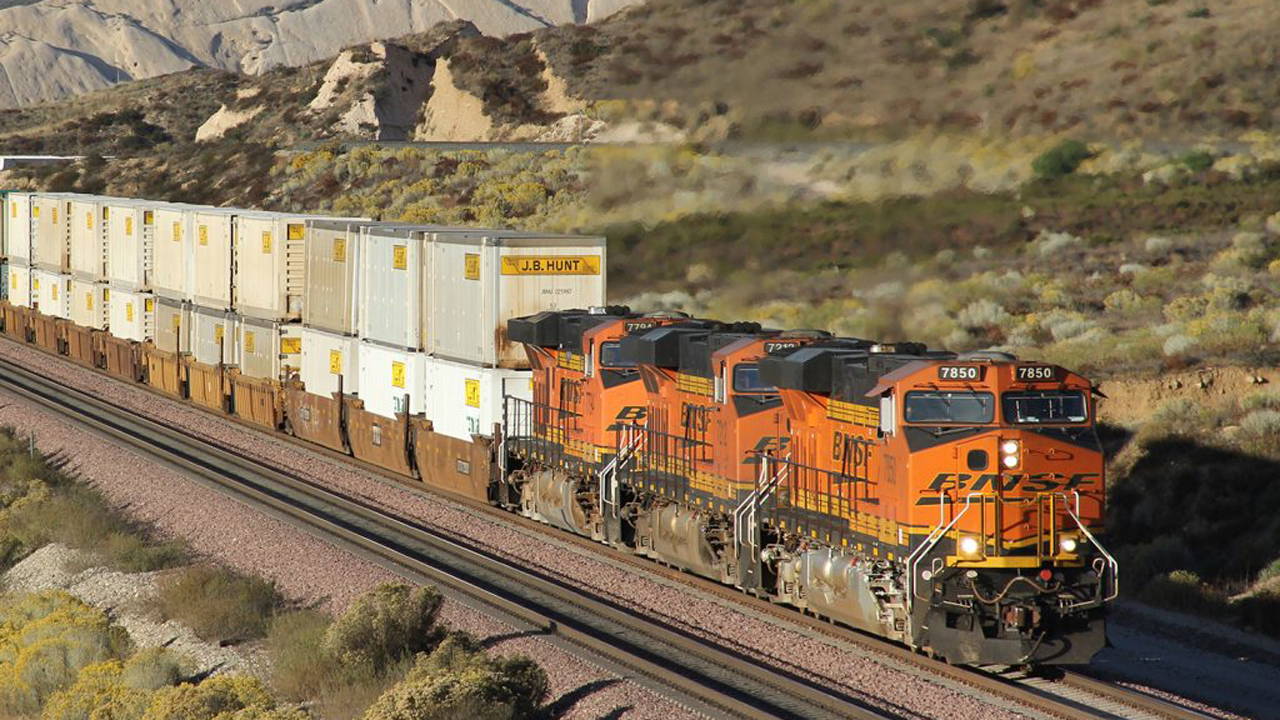 It’s third-quarter 2019 railroad financial results reporting time, and sometimes, insight about rail freight markets comes from strange places. One of those might just be the quarterly report by J.B. Hunt (JBHT). The Hunt logistics company is one of the largest U.S. intermodal rail organizers. It essentially buys contracted intermodal train service from railroad companies like BNSF and Norfolk Southern.

With all the massive railroad data out there from so many media sources, let’s take a close look at the intermodal domestic container train business using J.B. Hunt metrics instead of railroad company reported data. To do this, let’s examine the publicly reported J.B. Hunt market data as sliced and diced by the Susquehanna Financial Group (SFG), which specializes in analysis of the securities of firms like CSX, JBHT, NS and Union Pacific.

Together, let’s look at two graphs produced by SFG experts. These two slides and the rail intermodal market traffic segmentation describe the economic geography of the domestic intermodal market segment. While broad-sourced reports show that domestic movement intermodal movements are down year-over-year for the U.S. major-size Class I railroads, these two charts show the difference west and east of the Mississippi River.

There was a significant 7% or so recent western transcontinental freight growth during the third quarter, when we examine J.B. Hunt Intermodal (JBI) data. What is in those Hunt containers? There is quite a bit of international imported goods in so-called domestic containers. Why? Because a lot of international imported maritime container goods are transloaded at West Coast ports from the smaller maritime ISO TEU and FEU containers into much-larger-cubic-capacity 53-foot domestic containers.

This kind of market insight often gets lost in reporting if one only examines a railroad company source.

The y/y growth turned strongly positive only for domestic J.B. Hunt containers, at about 7% during the just-completed third quarter. Using this data, the y/y growth out West for international containers turned only marginally positive in the third quarter, at just under 1%. Only two quarters stand out as outstanding, 10% or better year over year growth.  They were first-quarter 2016 and second-quarter 2017.

In the Eastern states’ region, intermodal growth using this database fared worse than the West. Figure 2 shows the JBI eastern U.S. pattern—and includes a reference to Norfolk Southern and CSX rail container volumes. JBI volumes have been dropping as y/y percentage growth since third-quarter 2018. The last outstanding y/y growth of almost 20% was back in third-quarter 2014. There have only been four to five quarters since the 2014 with intermodal Eastern growth registered 10% or better.

2019 has now seen a negative pattern—about –2% to –10% in the East. Few predicted this kind of market loss for intermodal. Yes, some of the decline was by management choice as railroads decided to race toward higher quarterly free cash flows associated with de-marketing certain lower-yield intermodal lanes.

My translation as a railroad economist is that the long-expected taking of trucks off the Eastern state Interstate highways via intermodal is not happening—if we use this data source for our evidence. The strategic questions therefore may be, “Can intermodal railway market share decline in short-haul O/D distances be reversed? Is there a large highway share to be captured if high-margin PSR accounting results are to be maintained?

In a search for analytical balance, there is a more positive interpretation. Bascome Majors and the SFG analysts believe that J.B. Hunt did a great job of gaining share in the Western domestic intermodal region this year. A deeper look at the market dynamics reveals that Hunt leveraged its unique revenue-share relationship with BNSF to win business from its trucking competitors who also use BNSF intermodal trains. Those competitors include Schneider and Knight-Swift.

PSR-driven lane-selective business rationalization by the other major western Class I railroad, Union Pacific, has likely helped J.B. Hunt at the margin. (Note that J.B. Hunt, with its contract BNSF agreement, doesn’t move its containers on UP trains.)

Back in the Eastern states, Majors notes that Eastern domestic intermodal remains more challenging in general, given cyclical pressure from rising truckload capacity and falling truckload rates. Lower truckload spot rates are leading to a loss of Eastern rail intermodal growth opportunity. This trend was spotted back in fourth-quarter 2018 by journalist investigator Ari Ashe with the Journal of Commerce—and later confirmed by other analysts.

SFG also notes that there is a possibility for future route and service rationalizations by J.B. Hunt itself as it works with Eastern partner Norfolk Southern.

Time will tell how these different intermodal markets will evolve. The pattern in each of the two SFG charts suggests “economic uncertainty.”  Has intermodal rail reached its optimum penetration market share range? Or not?

Therefore there are logical questions about the future of domestic intermodal Eastern services on other partnership routes like that of Schneider and CSX over future use of the under-construction Rocky Mount North Carolina intermodal hub. What are the structural economics of domestic intermodalism along the I-95 and the I-81 north/south competitive truck lanes?

There clearly is some uncertainty as to the market outlook for mid-distance to short-haul rail intermodalism; less so perhaps out West, given the vast distance between major logistics markets. What do you think? Counterpoints are always welcome.