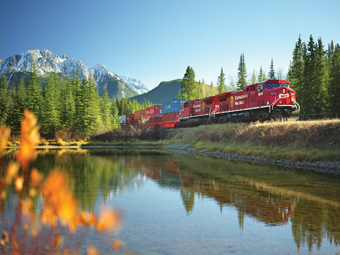 The Surface Transportation Board (STB) ruled Sept. 2 that five Class I railroads—BNSF, U.S. affiliates of Canadian National and Canadian Pacific, Norfolk Southern and Union Pacific—are revenue adequate. That is, they achieved a rate of return on investments used to provide railroad service that is at least equal to the average cost of that investment capital.

The question most being asked is, “What does this mean for railroads, shippers and investors?” First, scratch investors. Railroad financial reports to stockholders never mention return on investment, so it is logical to assume that investors have more sophisticated methods of determining where to squirrel their cash. Indeed, CSX and Kansas City Southern flunked this latest STB revenue adequacy test, yet investors have been placing buy orders on their shares as aggressively as on the stocks of the five railroads found by the STB to be revenue adequate for 2013.

So what does revenue adequacy mean for railroads and shippers? First, a little background.

The 1980 Staggers Rail Act instructed regulators to promote a safe and efficient rail transportation system by allowing rail carriers to earn adequate revenues, and logically required an annual determination of which railroads are revenue adequate.

Revenue adequacy also was made a component of STB standards for judging the reasonableness of rail freight rates assessed captive shippers (those with limited or no effective transportation alternatives). Well, sort of, as it has yet to be utilized in rate challenge cases.

Revenue adequacy, says the STB, “represents a reasonable level of profitability for a healthy carrier. It fairly rewards the rail company’s investors and assures shippers that the carrier will be able to meet their service needs for the long term. Carriers do not need greater revenues than this standard permits, and we believe that, in a regulated setting, they are not entitled to any higher revenues. Therefore, the logical first constraint on a carrier’s pricing is that its rates not be designed to earn greater revenues than needed to achieve and maintain this revenue adequacy level.”

But more than three decades after the Staggers Act introduced a revenue adequacy goal, regulators have yet to determine how the revenue adequacy constraint would work in practice to protect captive shippers. In large part this is because few railroads—and never as many as five—have achieved revenue adequacy status as determined by the STB. While there have been a handful of shipper complaints seeking to use a carrier’s revenue adequacy in pursuing a rate complaint, such cases have settled voluntarily.

Recognizing the rail industry is on the cusp of revenue adequacy under the existing test, the STB has underway a proceeding (Ex Parte 722, Revenue Adequacy) to examine the methodology for determining revenue adequacy and how that test should be used in judging the reasonableness of shipper-challenged freight rates.

Of course, only the STB (and perhaps federal appellate judges, if the agency oversteps is bounds) gets to say what revenue adequacy really means in practice (as opposed to theory), and how a revenue adequacy determination will be utilized in judging rate reasonableness in the face of shipper challenges.

And when the STB does speak, understand that the three voting members are relative newbies; that prior members of the STB and its predecessor Interstate Commerce Commission never dealt with the reality of railroad revenue adequacy; and when the STB does act on this long-anticipated reality, at least one of the three—the chairman—may have departed and been replaced. Indeed, nobody has an explanation why the current chairman has yet to be renominated with fewer than four months remaining on his statutory one-year maximum holdover following expiration of his term.

Not in dispute is that when railroads achieve revenue adequacy (you thought at least some – even five – have?), it should be more difficult to increase rates to captive shippers. Were it only so easy.

As the railroads see it, a determination that one or more of them met the revenue adequacy test in a single year is no more indicative of revenue adequacy than a poor family being declared cured of poverty based on their winning a single year’s worth of zero-price rent and groceries. Economists are near unanimous in asserting that revenue adequacy must be repeated throughout a business cycle—the argument being the length of that cycle, and it is unlikely that a defensible definition will be fewer than at least five years.

But even agreement on the length of a business cycle begs the question of how to proceed if not all railroads are revenue adequate for the length of that business cycle. Geographic and product competition are not abstracts, meaning if a revenue adequate railroad’s rates are capped, a revenue inadequate railroad likely will be forced voluntarily to cap its own rates if its shippers find they cannot otherwise compete with shippers situated on the revenue adequate railroad whose rates have been capped by regulators. Such a result would be at odds with objectives of the Staggers Act and inimical to a goal of assuring a financially healthy national interconnected railroad network fit, willing and able to meet shipper demand.

Railroads also assert that given unprecedented demands for rail capacity by grain and crude oil shippers, now is not the time to deprive the industry, through a cap on rail rates, of resources it requires to expand capacity and improve fluidity.

Then there is the argument over the appropriate investment base. The current test uses book value, or the actual amount invested in assets, including improvements and minus depreciation. Railroads contend that the rate base be calculated on higher replacement costs. Shippers object and may have a stronger argument.

In a 2008 unanimous decision (Ex Parte No. 679, Petition Regarding Methodology for Determining Railroad Revenue Adequacy) – a discontinued precursor to the current STB inquiry—then-board members Charles Nottingham, Frank Mulvey, and Douglas Buttrey recognized opposition by the former Interstate Commerce Commission, General Accountability Office and Railroad Accounting Principles Board to using replacement costs. Railroads were told in that 2008 decision that they have “a heavy burden of persuasion to show” that replacement costs should be used rather than book value. Said the STB of the practical difficulties a replacement-cost approach would take:

“The first is the need to estimate the current replacement costs of rail assets, such as bridges, tunnels, land, track and grading. The second is the need to estimate the ‘real’ cost of capital to avoid double-counting the effects of inflation. And third is the need to identify the rail assets that would not be replaced once they have been fully depreciated, as it would be inappropriate to provide a return on the replacement cost of assets the carriers will not in fact replace.”

Hmmm. Railroad historians may recall that a 1913 congressional directive to value original as well as replacement costs of all railroad assets stretched for more than two decades before being abandoned in universal frustration.

Then there is the matter of a still valid 1944 Supreme Court decision known as Hope Natural Gas, which held that regulated entities must have opportunity to earn a reasonable return on capital invested in the enterprise, which is book value and not replacement costs.

Shippers also possess a strong argument that the time is past due for the STB to establish a practical revenue adequacy constraint on rail rates that might be incorporated in rate complaints under the complex and expensive stand-alone cost test.

Maybe. But we can probably say for certain that it will be years before these issues are resolved. Court battles surely will follow STB decisions on whether and how to retain or revise its formula for measuring revenue adequacy. Only after those questions are settled might the STB proceed with establishing a practical revenue adequacy constraint on rail rates. And that timing might well coincide with completion of a full business cycle.

Of course, Congress could intervene and instruct the STB to recognize what shippers insist is obvious—that railroads enjoy unimpeded access to investment capital, are revenue adequate, and that the STB should put its words into practice: “The logical first constraint on a carrier’s pricing is that its rates not be designed to earn greater revenues than needed to achieve and maintain this revenue adequacy level.”

Given expectations that Republicans—typically more sympathetic to railroad arguments than those of shippers—will extend their control of the House, and indications that Republicans will capture the Senate, captive shipper entreaties to Congress are a fool’s errand (as they have been even with Democrats controlling one or both chambers). Alas, competent commerce attorneys may remain confident about job security. And that may be the most accurate observation made herein.