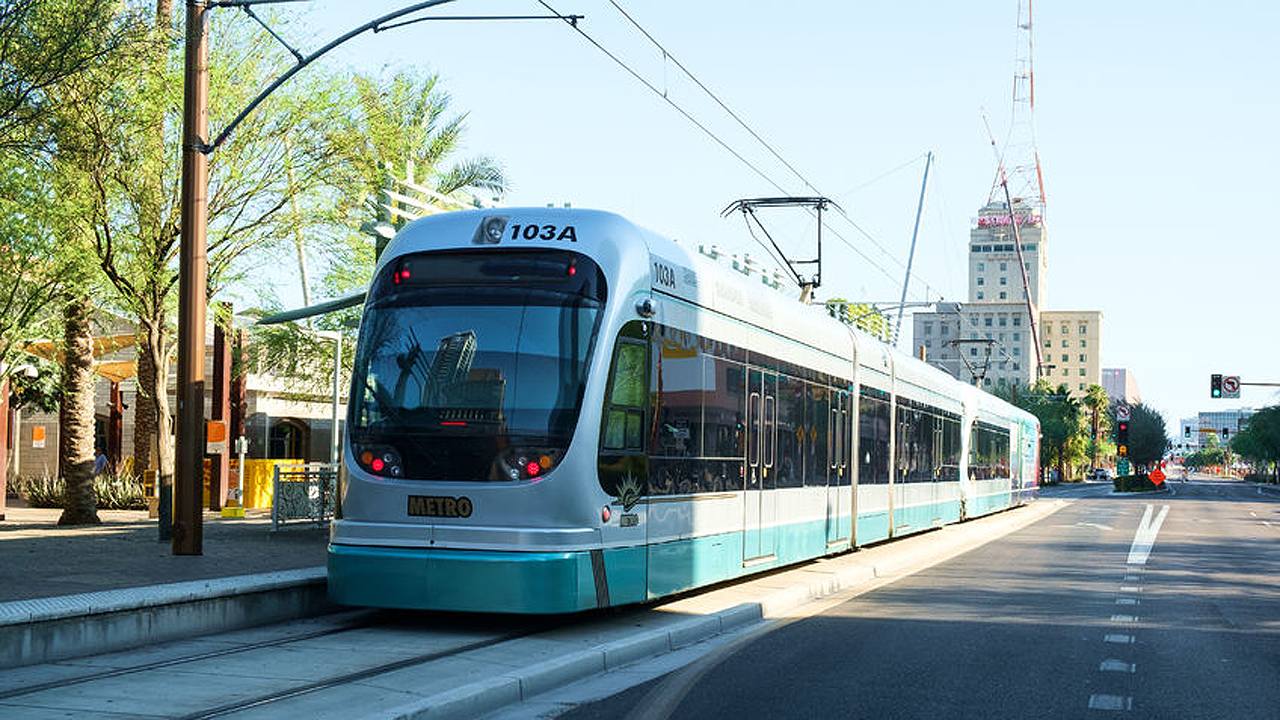 A news release from Valley Metro began: “Voters in Phoenix have defeated an initiative that would have ended all light rail construction, prohibited future rail investment and returned billions in federal dollars previously pledged to expand the regional transit system. This vote marks the fourth time since 2000 that Phoenix voters have publicly supported light rail through the election process.”

The LRT currently runs for 26 miles through the cities of Chandler, Gila, Tempe and Mesa, as well as Phoenix. There are three planned extensions: the 5.5-mile South Central Extension/Downtown Hub (the project at issue in the election), Northwest Extension Phase II, and Capitol-10 West Extension (a ten-mile line scheduled to be completed in 2030). There is also a streetcar line under construction in Tempe. The original LRT started operating on Dec. 27, 2008. The most recent extension is 1.9 miles in Mesa, at the line’s eastern end, which started service on May 18, 2019. 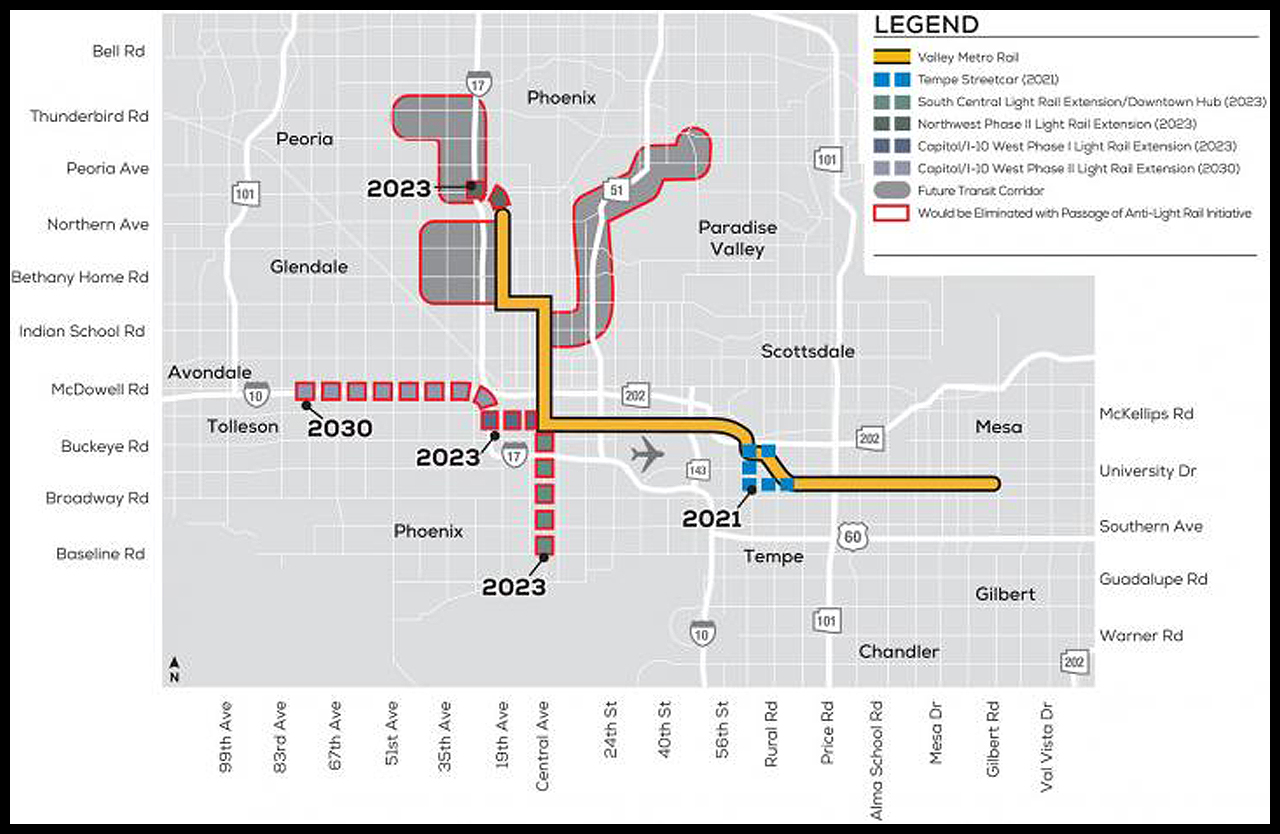 KJZZ, the NPR (National Public Radio) station in the Arizona capital, ran the headline: “Early Phoenix Results: More Light Rail, Same Pension Funding.” Early reports indicated that the anti-light-rail initiative was losing by 37% to 63%, while the anti-spending proposition was going down by an even-wider margin; 33% to 67%, with about 180,000 votes counted. Many of those were cast through an early-voting process.

Phoenix Mayor Kate Gallego told KJZZ: “It was a great day for our city.” Regarding Proposition 106, she said that it “would have put the city in handcuffs,” and “any growth would have had to go into the pensions.” In a separate Twitter post, she said: “Thank you, Phoenix—we did it! Together, we’ve defeated both Prop 105 and 106. Welcome to the Phoenix of the future—where we invest in our transportation, our parks and our libraries, and where Phoenicians, not outside special interests, decide what’s best for our city.”

The light rail funding is part of a 35-year plan with $31.5 billion funded by a sales tax approved by voters in 2015. Proposition 105 would have re-directed the LRT portion of the revenue raised by the tax to other transportation projects. According to the Arizona Republic, about 35% of the funding is dedicated to LRT expansion, 14% to street repairs, and the other 51% to buses.

The original core of the opposition to rail funding came from businesses along Central Avenue whose owners argued that reducing automobile traffic on that street for rail transit would discourage potential customers. Plans for the South Central Extension called for Central Avenue to have two traffic lanes, reduced from four. Supporters of the anti-rail proposition began by opposing the South Central Extension and later expanded their purview to oppose expansion of the region’s light rail generally. Local conservative activists, who are opposed to transit on ideological grounds, joined the campaign. They included the Arizona Free Enterprise Club, an organization with ties to Koch Industries (founded by the infamous “Koch Brothers”), whose objectives over the years have included fighting against transit initiatives, especially those that include rail transit. Koch Industries exerted its influence in Nashville recently, helping to defeat a major transit expansion initiative there. The Phoenix anti-rail coalition called itself “Building a Better Phoenix” but a solid majority of voters did not see how their ideas would advance that objective.

Scot Mussi, President of the Arizona Free Enterprise Club, lamented the loss, telling KJZZ that the referendum was “a classic case” of “it’s really hard to fight City Hall.” He added that the small-business owners on Central Avenue didn’t have many friends, while the “entire establishment” was against them. Ironically, despite support from an organization affiliated with Koch Industries and its wealth, he complained that the owners of small businesses on Central Avenue did not have the money to fight an effective campaign. He did not address the issue of how much funding would have been enough, since he most likely considered whatever funding the Koch-Industries-affiliated organization and others contributed was not enough for victory. He claimed that the proposition’s opponents did not explain the merits of light rail, but it now appears that the voters were already aware of those merits. He criticized the opponents of the proposition for not disclosing their funding sources, but he did not disclose his side’s funding sources to KJZZ, either. His last claim is ironic, since a ban on dark money had recently gone into effect in the city, with Mayor Gallego’s support.

Annalee Monroe, fact-checker for the Arizona Republic, reported that Valley Metro CEO Scott Smith reminded voters that, if the proposition had been approved, only the portion of construction funds coming from the City of Phoenix would be re-directed to other projects. Most of the city money comes from Proposition 104, a city tax to support transit. According to Valley Metro, federal and regional dollars spent to expand the system would have been lost if the initiative had passed.

Jessica Boehm reported in the Arizona Republic that a broad coalition had formed to support rail and oppose Proposition 105: “Nearly every member of the Phoenix City Council, Congressmen Greg Stanton and Ruben Gallego, business organizations and most of the local union groups opposed the initiative.”

Meanwhile, Arizona Republic editorial columnist Elvia Diaz could not hide her enthusiasm. She headlined her column that appeared on Aug. 28: “Hooray! Phoenix voters reject Prop. 105 and save the Valley’s light rail system.” She began by saying: “Raise a glass, Phoenix, for your sagacity to move ahead with the 5.5-mile light rail extension to the southern part of the city. But more important, raise a glass to your wisdom to reject the effort to kill all future light rail expansion by diverting money to the cheapest and most retrograde way to move the Valley’s burgeoning population around.”

Reaction to the Phoenix vote is coming in from the advocacy community around the nation, and it is positive. Jack May, a longtime New Jersey advocate and member of the New Jersey Association of Railroad Passengers (NJ-ARP) told Railway Age: “I am pleased that voters in Phoenix have defeated the proposition to amend the city charter to end construction of light rail in their city. The campaign, orchestrated by the billionaire Koch brothers through a local right-wing group, has apparently failed. This is the second setback for Charles Koch this week, as his brother David died five days ago.” May also cited an obituary for David Koch by Alex Kotch in The Guardian. While the article did not mention the anti-transit activities of the Koch Brothers—known among transit and environmental advocates as “The Destructive Diabolical Duo,” it was scathing in its mention of their other exploits. 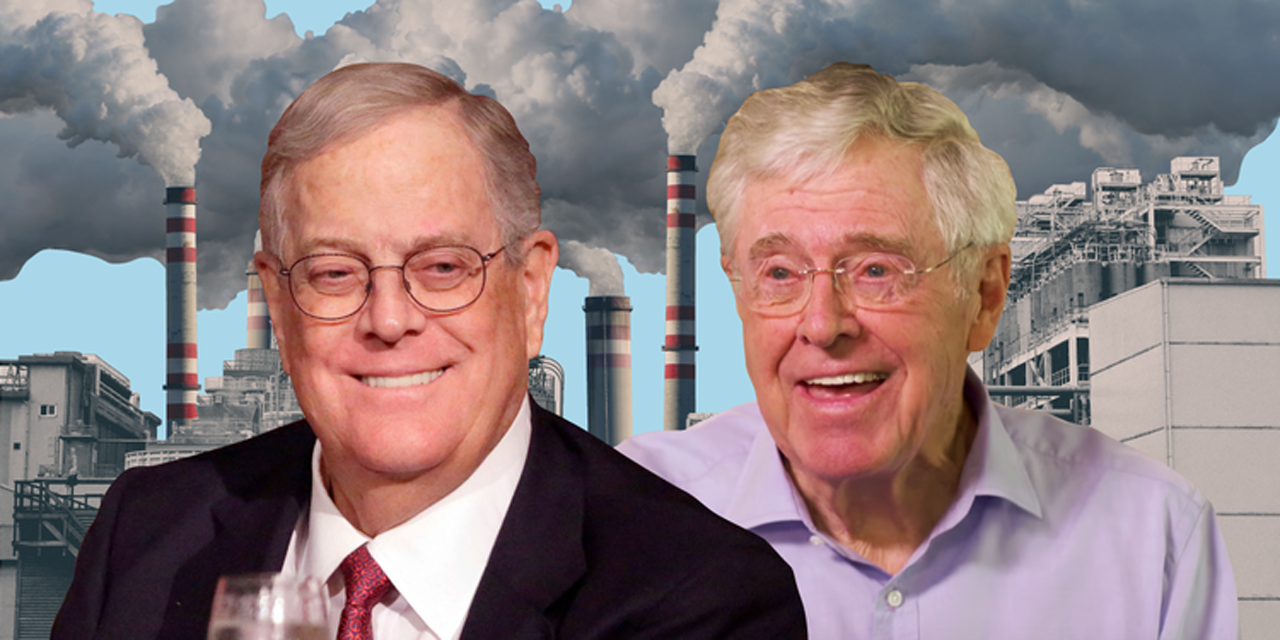 Editor’s Note: The “Destructive Diabolical Duo” of the anti-transit world “have succeeded in scuttling many a transit project, especially where rail is involved,” says David Peter Alan. “It seems that transit managers and advocates can now dare to hope that their reign is at an end, and that Phoenix’s voters have begun to turn the tide toward transit.” Koch Industries, called the “toxic empire,” “kingpin of climate science denial” and “Standard Oil of our times,” orchestrated and funded Proposition 105. This is not surprising. According to the University of Massachusetts Amherst Political Economy Research Institute, Koch Industries is one of the top polluters of America’s air, water and climate. Koch’s toxic output outpaces oil conglomerates Valero, Chevron and Shell. Combined, Koch businesses annually belch 24 million metric tons of greenhouse gases. Koch Industries over the years has been funneling billions into political front groups like Americans for Prosperity, which then spread the Koch “wealth” around the country to the political campaigns of candidates opposed to public transportation, health care reform, climate change legislation—indeed, anything having to do with providing a better, more-sustainable life for the vast majority of American citizens. In Phoenix, Building a Better Phoenix became a convenient conduit for Koch—with its deep, dirty pockets—to leverage opposition to the LRT extension into Proposition 105. Koch’s corrupt, sticky, stinky method of poisoning rail transit worse than the toxic trash the company and its putrid political influence dumps into America’s environment has been successful in other regions. This time, it didn’t work. Educated, enlightened voters saw through the Koch-funded smog and said no to Propostion 105. Koch’s vipers may have slithered back into their pits. But they’ll be back, in force, someplace else. Be prepared. — William C. Vantuono, Editor-in-Chief 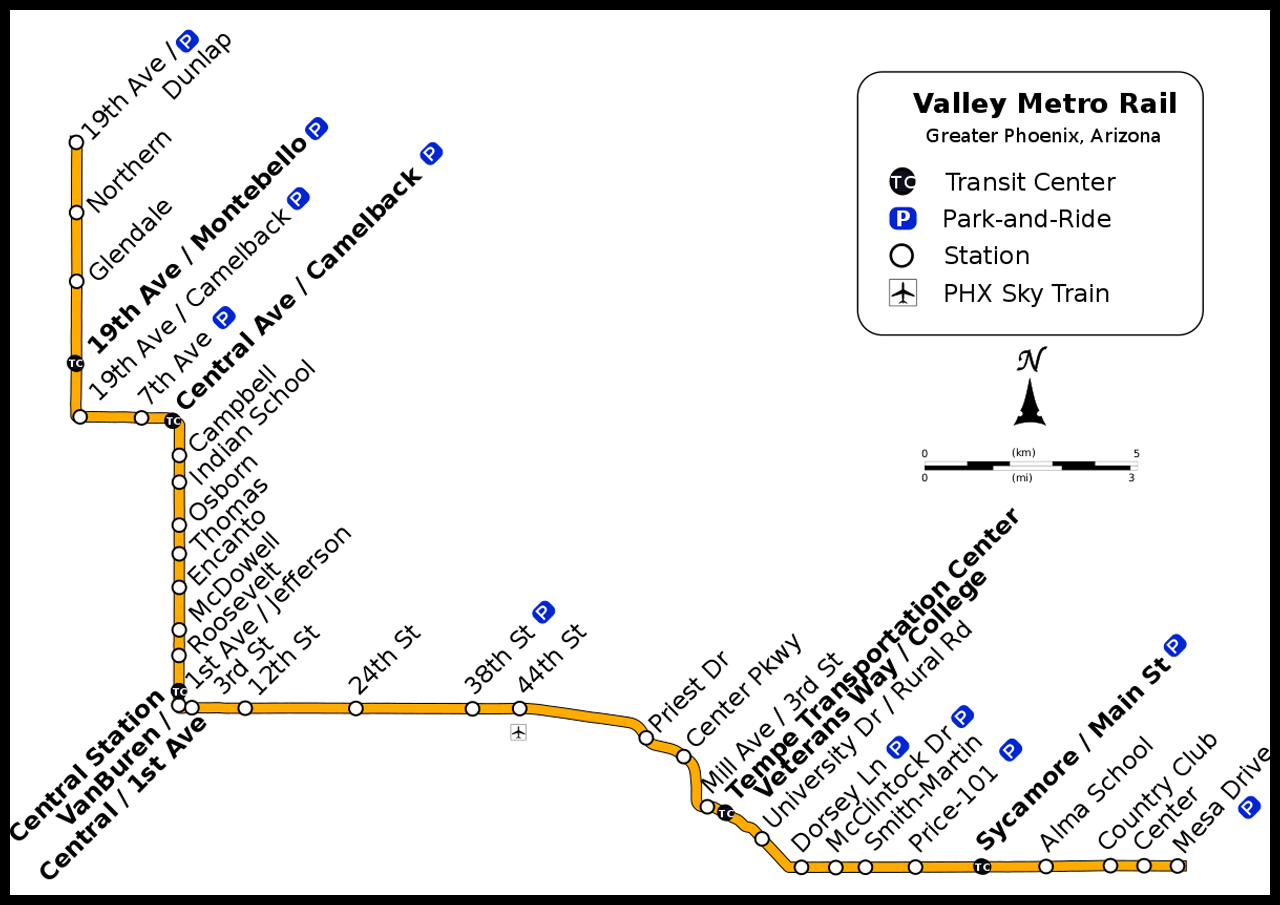