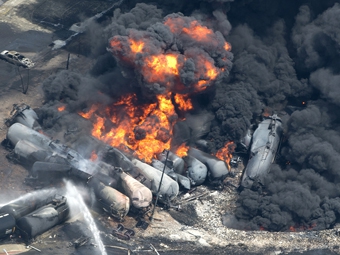 A plan to move a rail line from out of downtown Lac-Mégantic, Quebec, received financial backing from the federal government of Canada, but no solid dollar amount.

Transport Canada Minister of Transport Marc Garneau said in a statement that the federal government would contribute a “substantial sum” toward the Lac-Mégantic rail bypass project.

“The bypass project is a complex one, which I have been working on since I began my duties as Minister of Transport. There is still a lot of work to do with the Government of Quebec on cost sharing, and with the municipalities on finalizing the route, which is why the exact amount of the federal contribution is yet to be confirmed,” said Minister Garneau.

The town is the sight of one of the worst train accidents when an un-manned train carrying crude oil lost its effective braking hold and rolled downhill, into town, where it derailed, resulting in a large fire that left 47 dead.

Three employees of the train operator, Montreal Maine and Atlantic, were recently found not guilty at a criminal trial.

“My goal is to be able to announce the details before the fifth anniversary of the tragedy. Therefore, I am now inviting the provincial and municipal governments l to collaborate with us to complete this project as soon as possible,” said Minister Garneau.