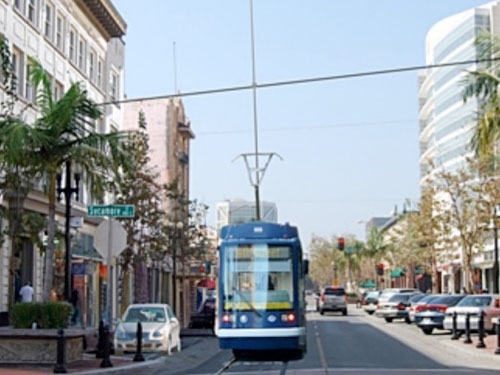 The Orange County Transportation Authority (OCTA) board of directors has selected HNTB Corporation to design the OC Streetcar project.

The project, which is billed as Orange County’s first modern streetcar, is planned to travel along a route just longer than four miles from the Santa Ana Regional Transportation Center, through Downtown Santa Ana and the Civic Center, along the Pacific Electric right-of-way and connect to a new multimodal transit hub at Harbor Boulevard and Westminster Avenue in Garden Grove. It’s intended to provide easy connections for people traveling from trains and buses to employment, retail and recreational areas.

The certification of the project’s environmental impact report in January and the issuing of a Finding of No Significant Impact in March signaled the completion of the state and federal environmental clearance processes. The selection of a designer was the next step to further advance the project.

Firm proposals were evaluated based on their qualifications, staffing and project organization and work plan. HNTB, a full-service design engineering firm, has worked on numerous streetcar and street-running light-rail projects nationwide. The project manager proposed by the firm has served in various design management roles on 12 streetcar projects throughout the U.S.

HNTB has worked with OCTA in the past to provide design services for the Laguna Niguel/Mission Viejo to San Juan Capistrano passing siding project and the Kraemer Boulevard railroad grade separation project.

On the current schedule, construction for the OC Streetcar would begin in 2017, with service beginning in 2020.