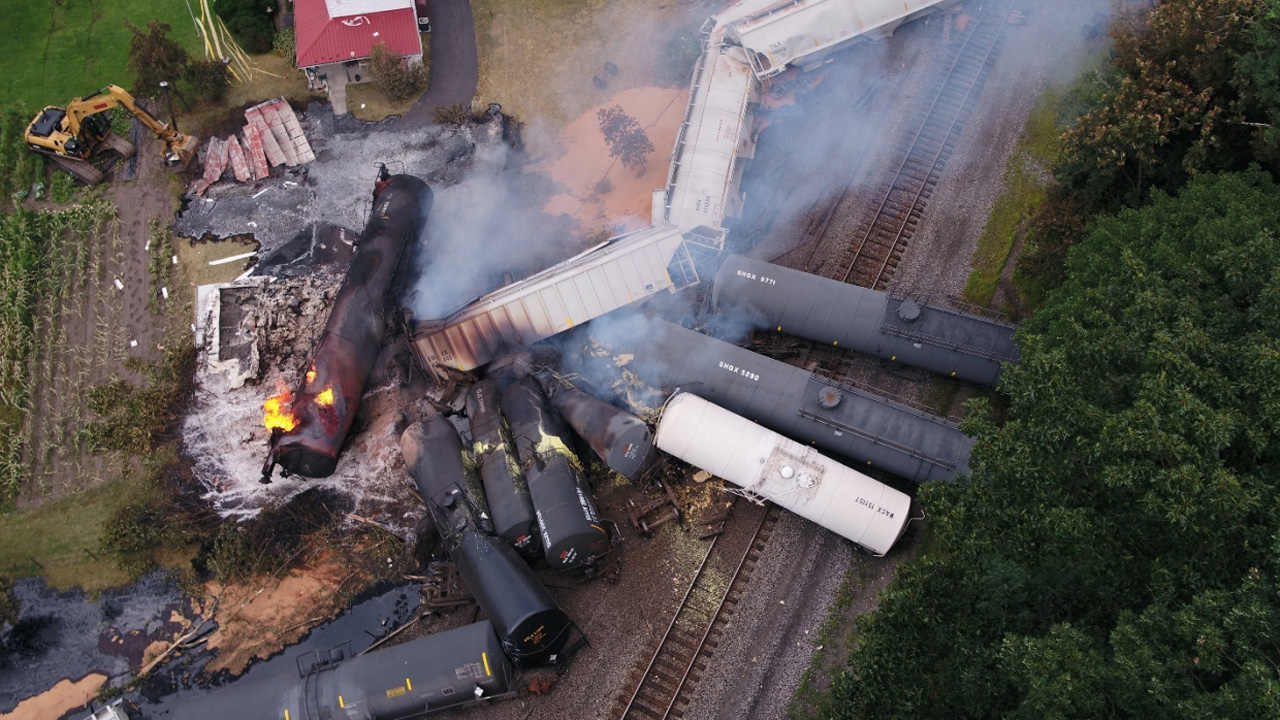 NTSB’s recently released report on a 2017 CSX derailment in Pennsylvania, pictured, found the probable cause was “inappropriate use of hand brakes on empty railcars to control train speed and the placement of blocks of empty railcars at the front of the train consist.” (Photo from CSX)

The National Transportation Safety Board (NTSB) has issued safety recommendations to the industry following its investigation of the 2017 CSX hazmat derailment near Hyndman, Pa.

Of the 178 railcars on 10,612-foot-long, 18,252-ton PSR (precision scheduled railroading)-configured train Q38831, 33 derailed, among them three tank cars containing hazmat that were breached, resulting in a fire. There were no injuries, but three homes were damaged and some 1,000 residents within a one-mile radius were evacuated. Damage costs were estimated at $1.8 million.

NTSB’s recently released report (download below) found the derailment’s probable cause was “inappropriate use of hand brakes on empty railcars to control train speed, and the placement of blocks of empty railcars at the front of the train consist,” meaning that the train’s load/weight distribution was improper. The agency noted that CSX operating practices allowed both. This led to “elevated longitudinal forces and increased lateral forces at the wheel-rail interface at the curve in the rail on the leading 42 cars combined with tread buildup on the 35th car, which was the first to derail.” Q38831, classified as a Hazardous Material Key Train, consisted of 5 locomotives (3 powered, 2 in tow), 128 loads and 50 empties. Seventy of the loaded railcars contained hazardous materials such as propane, isobutane, denatured ethanol, undenatured ethanol, heptane, molten sulfur, sodium chlorate, and phosphoric acid.

“The CSX rules for building train consists address the placement of loaded railcars ahead of blocks of empty railcars but do not account for the placement of the empty railcars at the front of a consist or the total tonnage behind the empty railcars,” NTSB’s report noted. “Operational practices allowed the train consist, which was assembled with a more uniform weight distribution when it left its point of origin, to be altered during the route for purposes of time and efficiency, changing the forces exerted on empty cars. Consequently, 90% of the train’s total tonnage was behind the lead 42 cars, resulting in excessive longitudinal and lateral forces exerted on the empty cars as the train descended the grade.”

In response, NTSB has made the following recommendations to the Federal Railroad Administration (FRA), CSX, and the Security and Emergency Response Training Center:

• “Develop and issue guidance for railroads to use in developing the risk reduction programs required to be submitted for approval.”

• Revise rules on “building train consists to require that large blocks of empty cars be placed toward the end of the consist.”

• “Prohibit the use of hand brakes on empty railcars for controlling train movement in grade territory.”

• “Work with member railroads to develop guidance material and best practices for the development and implementation of their risk reduction programs.”

To the Security and Emergency Response Training Center:

“CSX appreciates the work of the NTSB in connection with the derailment in Hyndman, Pa. We will be reviewing and responding to the NTSB’s recommendations.”