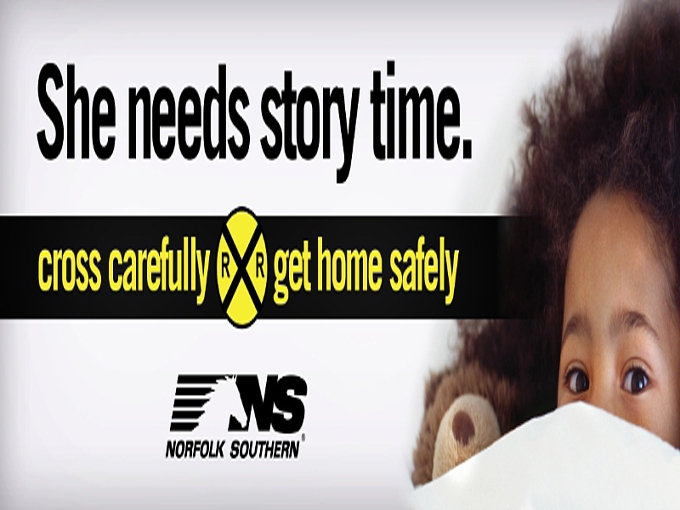 Norfolk Southern is bringing its “Train Your Brain” public safety campaign, now in its ninth year, to central and south Georgia to remind people to be safe and alert around railroad tracks and trains.

Billboards, with photos and captions such as “She needs story time” and “Your fan club is waiting,” will remind motorists that their families and loved ones depend on them to return home safely. The billboards are going up this week in communities along the Interstate 75 corridor from Macon to Valdosta.

“The images are intended to grab drivers’ attention and encourage them to cross tracks safely,” said Cayela Wimberly, NS’ director of grade crossing safety. “Our goal is to save lives by educating people that trying to beat a train across railroad tracks or walking or playing on tracks is potentially deadly and always illegal.”

In addition to billboards, “Train Your Brain” safety messages will appear on gas pumps and ice chests at convenience stores, in movie theaters, on game tickets at 38 high schools, and on homework folders at 63 public elementary schools. To encourage safe driving habits, rail safety kits will be distributed to 3,600 students enrolled in driver’s education programs at 18 public high schools. And the campaign’s mascot, “Brainy,” a giant wide-eyed pink walking brain will make appearances at fairs, festivals and sporting events.

NS is also a longtime supporter of the national railroad safety awareness organization, Operation Lifesaver, which works in partnership with railroads, law enforcement and transportation agencies to encourage the public to make safe decisions around tracks and trains.