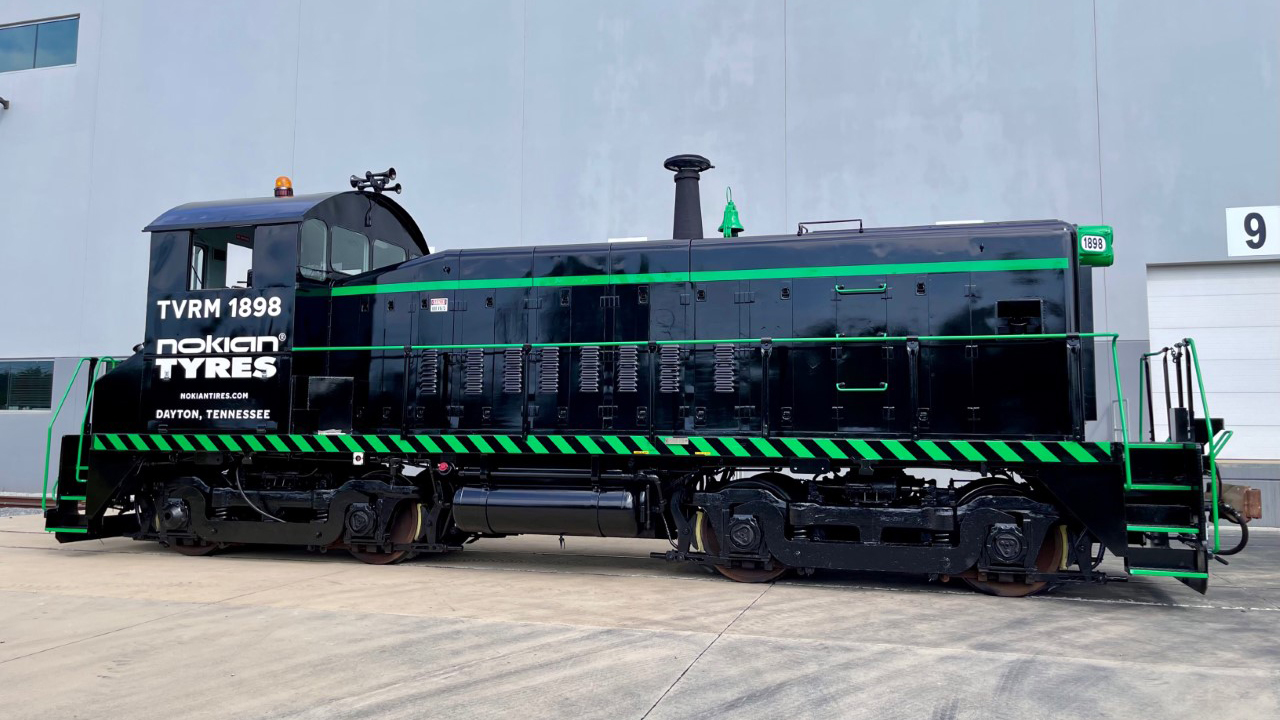 The museum provides a crew and a restored 1950’s-era locomotive to move raw materials 5,000 feet from the NS line to a storage warehouse on Nokian Tyres’s Dayton, Tenn. site, which NS helped the tiremaker select in 2017. The $360 million, LEED v4 Silver certified factory opened in 2019, with commercial production beginning in 2020. NS started providing rail service earlier this year.

The facility produces North American-specific car and light truck all-season and all-weather tires, according to Nokian Tyres, which also has manufacturing plants in Nokia, Finland, where it is headquartered, and in Vsevolozhsk, Russia.

Switching at Dayton typically takes place weekly, Nokian Tyres told Railway Age, “but that number is increasing as inbound materials volume grows.” The switcher used there first “saw service in Korea with the U.S. Army, before being used by the U.S. Air Force to move rockets at Cape Kennedy during the 1960s,” according to the tiremaker. “It was again used by the U.S. Army before being donated to the Tennessee Valley Railroad Museum.”

“This locomotive helps us reliably handle larger quantities of materials and streamline our processes,” said Daniel Dobbs, Transportation Manager for Nokian Tyres. “It’s a step in the right direction to support the factory as we continue to scale up production.” The company increased its workforce from 150 employees to approximately 330 in 2021. At full capacity, the Dayton facility will employ up to 400 workers, produce as many as four million tires per year, and store up to 600,000 tires, it reported.

“As we grow in service to our customers and drivers, we want to expand in a way that honors our community and respects the environment,” Nokian Tyres Dayton Factory Operations Director David Korda said. “[The restored switcher from TVRM] helps us transport more raw materials to our factory in a sustainable way, while partnering with an organization that preserves rail’s rich history in this region.”

“Nokian Tyres is furthering our shared commitment to sustainability by leveraging a piece of rail history to serve their state-of-the-art manufacturing facility,” NS Industrial Development Manager Jacob Weir summed up. “Rail is the most sustainable method of shipping freight over land, and together we are lowering carbon emissions in moving materials, while connecting Nokian Tyres to markets across the U.S. and the globe.”