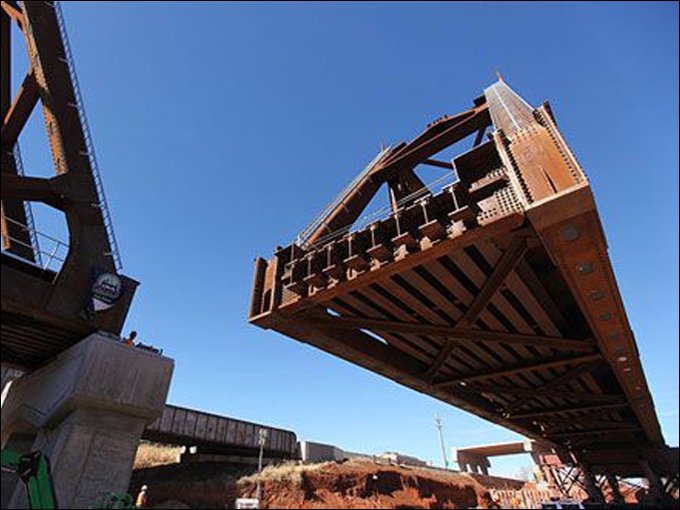 Oklahoma Department of Transportation (OKDOT) successfully moved two BNSF bridge spans into place the weekend of Jan. 26-28 in a complicated maneuver that was part of a highway expansion project.

OKDOT said the move was the first of its kind in state history, took two years to plan and required a 60-hour work window where all lanes of I-235 in Oklahoma City were shut down for the move.

On Saturday morning, OKDOT says self-propelled mobile transporters began inching the first of two 45-foot tall truss bridge spans weighing a total of 4 million pounds from their assembly site in the work zone to their final location about a quarter-mile, just south of N. 50th Street. The second span began moving mid-Sunday morning and was fully installed by early Sunday evening. Northbound I-235 re-opened to traffic Sunday night and southbound lanes opened early Monday in time for the morning commute, which was a full day ahead of schedule.

“The amazing teamwork between the project designers, Allen Contracting and American Bridge and [OKDOT] workers to get all this in place over a weekend was truly a modern engineering marvel and something Oklahomans will long remember,” said OKDOT Chief Engineer Casey Shell.

This marks the first time this type of bridge movement and installation has taken place in Oklahoma. Building the bridge truss structures near the highway and moving the fully assembled spans into place over the weekend greatly reduced the impact to traffic, requiring the interstate to be closed for a few days rather than several months if traditional bridge construction methods had been used.

The new bridge is one element of the nearly $88-million reconstruction and widening project on I-235 between N. 36th Street and I-44. There is still a year left in the more than two-year-long project on I-235.

In the coming weeks, BNSF crews will begin laying track to connect the existing railroad line to the new structure, allowing for later removal of the old railroad bridge by OKDOT’s contractor.