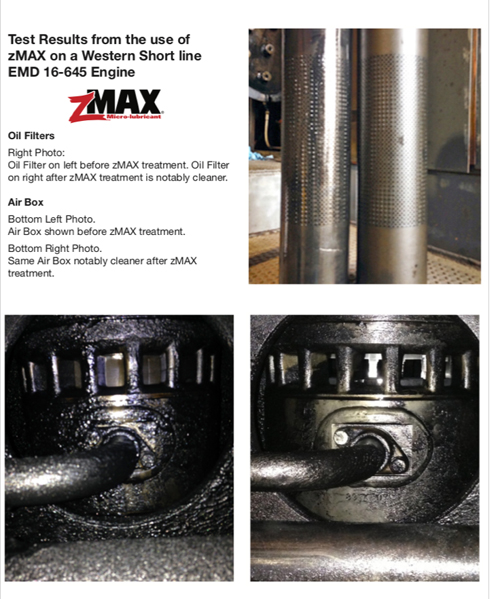 zMAX®, used in racecar and aircraft engines since 1946, is beginning to penetrate the railroad locomotive market—literally.

People familiar with motorsports history will recognize names like Mauri Rose, Dyno Don Nicholson, Arnie Beswick and George DeLorean (brother of John Z., whose real claim to fame was the 1964 Pontiac GTO, not the ill-fated DeLorean DMC-12). They may not be familiar with Joe Lencki, who in the years leading up to World War II was a prominent racecar mechanic, lubrication scientist and engine designer competing at Indianapolis Motor Speedway. Lencki’s engines were among the most successful of their day.

During the war, tasked with improving the range and reliability of military aircraft engines, Lencki supervised engine construction for the Wright Cyclone R3350 B29 engines. He returned to racing in 1946, picking up where he had left off in a search for a lubricant that could mitigate cold-start engine damage. Lencki soon developed a specially reformed “pure lubricant” he named “Speedway Cocktail.” This product, which offered “metal soaking” properties developed with the assistance of Nobel Prize-winning physicist Enrico Fermi, gained quick acceptance in the motorsports community. It was sold for professional use only.

In the 1950s, Lencki renamed his product Lenckite. In the early 1960s, he connected with former U.S. Air Force mechanic Ed Rachanski Sr., a full-time aircraft engine builder and part-time drag racer for Lincoln-Mercury. In 1980, largely through Rachanski Sr.’s persistence, Lenckite received FAA Approval for use in all aircraft piston engines.

More than 70 years after its acceptance in the motorsports community and 37 years after receiving FAA Approval, Lencki’s product is beginning to work its way into the railroad industry. zMAX®, as it’s named today, is produced by Bedford Park, Ill.-based Oil-Chem Research Corp., which in 1996 was purchased by Bruton Smith’s Speedway Motorsports, Inc. Speedway Motorsports has broadened zMax’s consumer marketplace, which includes auto parts and big-box stores like Walmart. Ed Rachanski Sr. serves as Chief Technical Officer. His son, Ed Rachanski Jr., is the company’s Technical and Manufacturing Director.

Short line conglomerate OmniTRAX this year became the first railroad company to adopt zMAX as part of its regular locomotive maintenance program, after a successful trial run. “As most everyone knows, using an oil or fuel additive in the rail industry is hard to do, whether it’s because of the different variables that come into play that make it difficult to track the benefits, or just the stigma of ‘snake oils,’” says Director of Mechanical-North Justin Moon. “So when Ed Rachanski Jr. approached me about a test program, I was skeptical on what we were going to see. Because it’s a micro-lubricant and my knowledge of what it has done in the automotive field, I was willing to give it a try.”

“After the first six months, I was sold on getting zMAX into the rest of our fleet, simply because of how it cut down the amount of oil the engine was pushing out the stack during the winter months while idling,” Moon says. “During annual inspections on these locomotives, we noticed how the air boxes were cleaner than normal, with fewer ash deposits. There was less carbon buildup in the stacks, and no excessive wear on any internal engine parts.

“With these types of results in addition to what I will call the ‘soft’ benefits—no more dry starts due to better lubricated-metal and bearing surfaces, and labor savings by not having to wash the locomotives as often—I made the decision that zMAX was going to be part of our normal maintenance practices. We recently rolled out a new mechanical instruction to all OmniTRAX properties. Orders have been placed, and soon we will have 100 locomotives across the U.S. and Canada using zMAX.”

“We don’t have a full overhaul program,” says Moon. “We do standard periodic 92-day, 184-day, and 365-day inspections. We rarely bring new units into the fleet.”

As described by Rachanski Jr., zMAX is produced with a proprietary reformation formula. “We start with highly refined petroleum oil whose molecular structure is further refined to create a Micro-lubricant™,” he says. “zMAX uses the engine’s lube oil as a carrying agent to reach the metal. Based on Auger Electron Spectroscopy, it penetrates into metal 82 times deeper than other lubricants. It keeps metal surfaces cooler and better lubricated to help fuels and oils do the job they were designed for. It cleans, lubricates and protects metal from the inside out, and disperses varnish, carbon and other harmful performance-robbing deposits.”

“zMax is not an oil additive or chemical,” Rachanski stresses. “It’s a pure petroleum product compatible with all motor oils, conventional and synthetic. Its molecules have been reformulated smaller than regular engine oil molecules. This allows its unique ‘micro-molecules’ to soak into the metal.”

“Ordinary engine oil additives use materials like Teflon®, PTFE, zinc phosphates, Graphite and MoS2 in an effort to increase protection and lubricity,” Rachanski says. “Based on SAE J357, a lubricant additive agent is ‘a material designed to enhance the performance properties of the base stock or to improve the base stock properties that do not naturally exist.’ zMAX does neither, as it is not designed to improve or enhance any qualities of the engine oil. Introducing zMAX into the engine oil is the means to transport it directly to the engine’s metallurgy.”

In new or remanufactured engines, if used during assembly or at initial start-up, zMAX “will maintain baseline performance throughout the life of the engine,” Rachanski adds. In turbocharged applications, it “increases cooling, reduces deposits, provides better heat dissipation at shutdown and helps improve turbo response.” During short- or long-term storage, a zMAX-treated oil film “stays on the metal, continuously protecting against rust and corrosion. Its instant oil film at startup protects surfaces until full lubrication reaches components. The improved heat transfer from micro-lubrication results in cooler surfaces and less thermal distortion.”

Internal engine deposits reduce oil flow and the oil’s ability to transfer heat. zMAX-treated surfaces “stay lubricated, so it’s difficult for deposits to form on them,” Rachanski notes. “It continuously ‘weeps’ out of the metal’s pores and stays on the metal. Better compression results in more-efficient combustion, improving fuel economy, increasing horsepower and lowering emissions.”

In another trial with a western short line test locomotive, overall fuel consumption dropped 15% and oil consumption fell 83%. Crankcase pressure vacuum increased 47%. Fuel injector failures were eliminated and fuel dilution was reduced. Valve lash adjustors were cleaner. No cylinder liner replacements have been needed on the treated units since application. In one instance, zMAX freed a stuck turbocharger sprag clutch gear, saving the railroad $23,000 because a replacement unit wasn’t needed.

Following are historic photos of Joe Lencki in his racing days.