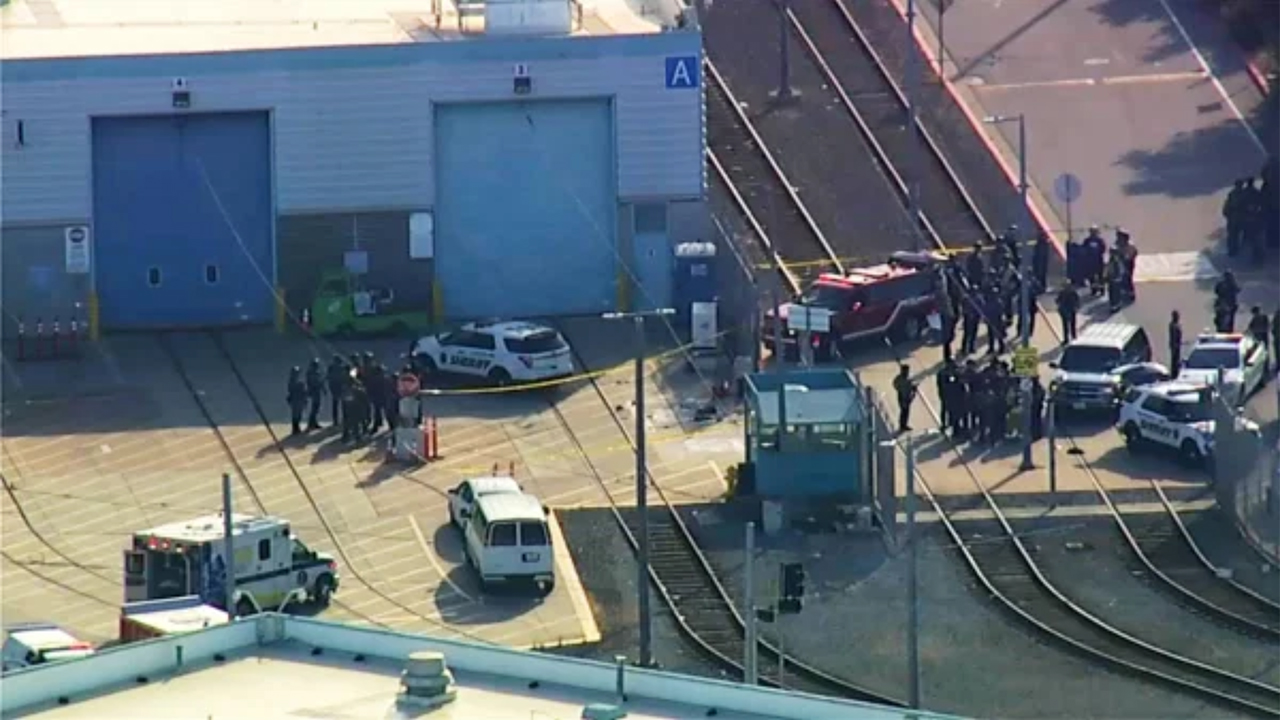 The wave of mass shootings that has swept across the United States in the past few years hit the rail industry when, at approximately 6:30 a.m. PDT today (May 26), a gunman opened fire at the Santa Clara Valley Transportation Authority light rail vehicle yard and maintenance facility just north of downtown San Jose. There were 10 fatalities and multiple injuries. The gunman, identified as VTA employee Samuel J. Cassidy, is among the dead.

According to multiple news sources, at about 6:35 a.m. PDT, San Jose police received multiple 911 calls about gunfire at the VTA yard, and units responded to the scene at Younger Avenue and San Pedro Street. Dozens of San Jose police and Santa Clara County sheriff’s vehicles responded. Sheriff’s officials confirmed at about 8:10 a.m. PDT that the shooter, Cassidy, 57, was dead, and have since confirmed that he died of a self-inflicted gunshot wound.

A clear motive has not been established, but media outlets investigating the shooting were reporting on May 28 that Cassidy, a member of the Amalgamated Transit Union and a technician at the VTA maintenance shop, was a disgruntled employee who appears to have targeted his victims. The morning of the shooting, he was scheduled for a disciplinary hearing.

Eight miles away, firefighters responded to a fire at Cassidy’s house at 6:36 a.m., about the same time as the shooting. The fire is linked to the mass shooting; Cassidy’s address became the site of a second crime scene as gasoline, Molotov cocktails, thousands of rounds of ammunition and other explosive devices were found throughout the house. Investigators now believe Cassidy activated some sort of timed incendiary device to start the fire, perhaps to destroy evidence.

Cassidy spoke of hating his workplace while detained by U.S. Customs Officers after a trip to the Philippines nine years ago, according to the Associated Press. His feelings were detailed in a Department of Homeland Security memo book that had notes on how he hated the Santa Clara VTA. The memo also said Cassidy had books on terrorism, but when he was asked whether he had issues with people he worked with, he said no. A Biden Administration official confirmed this information to the AP.

There was a second fire at a lumber yard located between Cassidy’s house and the VTA facility that may be related. The first call the San Jose Fire Department got was at 6:29 a.m. about a blaze at the lumber business, just minutes before calls started coming in about a shooting at the VTA about five miles away. The fire started outside and spread to a nearby commercial building; the blaze destroyed a non-residential building in a nearby mobile home park. Minutes after the shooting was reported, the fire department was called at 6:36 a.m. to the fire at Cassidy’s house. San Jose Mayor Sam Liccardo told ABC-7 it appeared the gunman set the fire on his way to the work site, though fire department officials have not confirmed the blaze was intentionally set.

In a phone interview, Cassidy’s ex-wife Cecilia Nelms told local media outlet KTVU the two divorced in 2009, and she did not have much contact with him since then. She said she lived at the home for about 10 years with him. A check of court records shows Cassidy didn’t have a criminal background in Santa Clara County. But later, Nelms, who was married to Cassidy for about 10 years before they filed for divorce in 2005, told The Mercury News he often was angry at co-workers and about his assignments at work. She said Cassidy thought the VTA was unfair with its work assignments, though she said she hadn’t spoken with him in about more than a decade. Another woman who dated Cassidy filed a restraining order against him in 2009, accusing him of rape and sexual assault. The filing, obtained by The Mercury News, also includes accusations that Cassidy had severe mood swings and suffered from alcohol abuse. Investigators now say he may have been bi-polar.

The mother of a VTA employee told KTVU that her son thought Cassidy was “strange.” Others in the neighborhood described him as a loner. Doug Suh, who lives across the street from Cassidy, told USA TODAY he witnessed the fire at Cassidy’s home around 6:45 a.m. and took video on both his cellphone and his security camera. He said Cassidy had lived in the area for 20 years but despite his roots there, seemed quiet and unfriendly. He said he’d tried to talk with Cassidy multiple times, saying hello and offering other pleasantries, but wouldn’t get much of a response. “Every time I’d say hi, he ignored me,” Suh said. “I was surprised though … I didn’t think he was going to … kill people like that.” Suh described Cassidy to The Mercury News as “lonely” and “strange,” never appearing to have visitors.

Santa Clara County Sheriff Laurie Smith said her deputies and San Jose police officers arrived quickly after the initial 911 calls. “Our teams, with San Jose PD, were entering the building while shots were still going off. We attempted rescues,” Smith said. On May 27, she provided an update: Cassidy had two semiautomatic pistols and 11 magazines of handgun ammunition. Smith said the guns appeared to be legal, though authorities were working to determine whether any modifications had been made. When authorities confronted Cassidy after the shooting, he killed himself, she said. It happened so fast there was no exchange of gunfire. Smith added that detectives are reviewing Cassidy’s emails and texts to try to determine a motive, and that so far, Cassidy had left “no written documents found that I’m aware of.”

Soon after the shooter committed suicide, a bomb squad, alerted by a bomb-sniffing dog, was clearing the area in case the Cassidy had left explosives behind. Law enforcement authorities soon found materials that could be used to make explosive devices inside Cassidy’s locker.

The county building at 70 W. Hedding St. in San Jose served as a reunification center for VTA employees and families who were looking for each other, sheriff’s officials said. Grief counselors were on site.

VTA light rail service was suspended at 12:00 p.m. PDT until further notice, and bus bridges have been established, officials said.

BART General Manager Bob Powers made the following statement in reaction to the tragedy at a VTA facility in San Jose:

“On behalf of everyone at BART, let me extend my heartfelt condolences to the VTA family, our partners in Santa Clara County, following the tragic incident … We in the Bay Area transit community share common goals, values and commitment to the public. And, in times like these, we share their grief. I have been in contact with VTA’s General Manager … and I have made clear the BART family stands ready to provide help of any kind during this difficult time. Our thoughts and prayers are with all VTA employees today.”