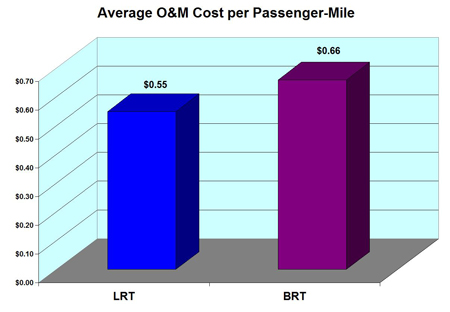 For several decades, U.S. proponents of “bus rapid transit” (so-called BRT) have waged a veritable war against light rail transit (LRT), relying particularly on a claim that BRT is “just like light rail, but cheaper.”

LRT defenders have responded with data-based evidence, of which some of the strongest has been the operating and maintenance (O&M) data reported by transit agencies and published annually in the National Transit Database (NTD) of the Federal Transit Administration (FTA). Consistently, this has shown LRT systems averaging significantly lower in unit O&M costs compared to urban bus services. However, past NTD reports have consolidated BRT with “regular” bus performance data, leading bus partisans to argue that BRT’s supposed O&M cost advantages were being obscured in the big all-bus mix.

Such an analysis has now been performed by the Light Rail Now (LRN) Project of the Texas Association for Public Transportation (for which I’m a technical consultant), with summary results posted on the Light Rail Now blog. And these early results show LRT leading on what are arguably the two most critical performance measures—average annual ridership per system and average O&M cost per passenger-mile.

For BRT, this meant just the seven systems that were separately reported in the NTD—Cleveland, Eugene, Los Angeles, New York City, Kansas City, Las Vegas and Orlando. LRN points out that a number of important new recent-era BRT systems, particularly those in Pittsburgh, Miami, Seattle, Honolulu, Charlotte, Boston, and Ft. Collins, are not included because their specific data were not reported to the NTD.

So, within those stipulations, based on the new NTD data, the LRN study calculated the following results:

• Ridership: LRT systems attract about three times the average annual ridership of BRT systems, about 18.4 million rider-trips a year for LRT vs. about 6.2 million for BRT.

The analysis did find BRT ahead in terms of cost per rider-trip (i.e., cost per boarding passenger). In this case, BRT was 38% lower than LRT. However, as LRN points out, in contrast to cost per passenger, cost per passenger-mile is “by far the most important indicator for assessing financial performance, since it measures the actual work being performed—the actual transportation of passengers—rather than cost based on merely the number of ‘bodies’ boarding the average transit vehicle.”

And, as the NTD data indicate, LRT systems are doing more “actual work”, carrying more passengers further than the BRT systems being reported. LRN’s analysis of the data shows that the average passenger trip on LRT was almost exactly twice as long—6.3 miles on LRT vs. 3.2 miles on BRT. Not only do more passengers, on average, ride LRT systems, they ride for much longer trips.

Even in view of the improved NTD data granularity now emerging, the study also discusses other problems in comparing LRT and BRT O&M costs:

“While each agency’s LRT is a ‘closed’ system (including virtually all costs, from platform operations to vehicle and track maintenance) with operational expenses compartmentalized and accounted for, ‘BRT’ roadway maintenance accounting varies from agency to agency—sometimes funded by the transit agency, sometimes by the city or county in their public works budgets. Other BRT expenses, such as vehicle maintenance, may be ended with systemwide bus expenses. Likewise, while LRT security operations are almost always controlled and financially allocated to the LRT budget; for BRT” this item may be hidden in systemwide costs. All told, there is really no consistency in how some BRT expenses are tallied and reported, thus affecting comparability to LRT costs.”

Future comparative analysis could benefit from substantial improvement if the FTA mandated greater consistency in these factors. And hopefully the availability of data will be significantly expanded with performance data for more individual BRT systems being added to these agency reports.