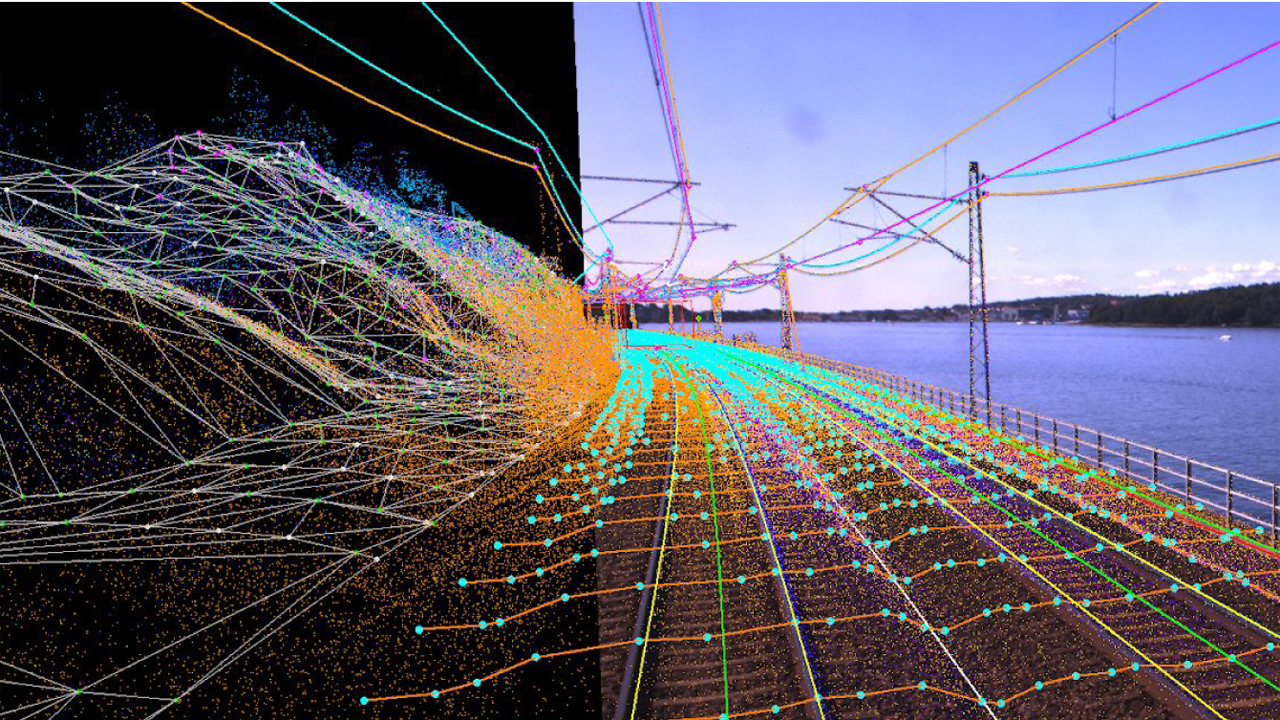 LiDAR (Light Detection and Ranging), a form of remote sensing, uses laser light pulses to gather information from surfaces in the form of “points” (3D coordinates). The data is processed with point cloud software to form a digital CAD model of the scanned environment. Data gathered during LiDAR surveys and the resulting 3D digital model can be used to analyze current railroad conditions, identify safety risks an dplan the construction of new lines and facilities.

LiDAR has come into widespread use and is growing. Transport agencies, governments and construction companies all over the world are using it to streamline processes and increase project deliverables. Many countries have constructed efficient and impressive railways with the help of LiDAR.

Across the U.S., transport agencies frequently use LiDAR systems to gather information. One example of a large U.S. LiDAR survey project is Amtrak’s survey of New York Penn Station. The survey was carried out without disrupting rail operations and gathered information from the station’s rail infrastructure and underground areas.

Among other countries that have used LiDAR to survey rail infrastructure are France and India. SNCF (French National Railways) used LiDAR data to generate a 3D digital model to identify safety risks and develop solutions to improve safety. Indian Railways (IR) announced earlier this year that it intends to use LiDAR to analyze right-of-way conditions on its Central Zone.

These are just a few examples of how railways are using LiDAR, which is fast becoming a universal technology in the industry.

• Calculating MAS: Once LiDAR data is gathered from a railroad route (or a potential route), point cloud processing software is used to automatically calculate MAS (maximum allowable speed) for curves, critical for preventing loss of control and derailment caused by an overspeed condition, while also improving ride quality and passenger comfort.

• Identifying right-of-way encroachment: Occasionally, vegetation or even man-made structures (fences, shifted utility poles, etc.) can encroach onto rail corridors, creating a safety hazard. At highway-rail grade crossings not equipped with active warning devices, such encroachment can limit motorists’ vision of the right-of-way and increase the risk of a collision. LiDAR surveys can identify such encroachment. Once located, detailed measurements of the encroachment assist with mitigation.

• Analyzing track and roadbed conditions. The data gathered during LiDAR scans provides detailed information, such as degraded ballast condition. Identifying problems quickly means they can be addressed immediately, before track conditions create a service interruption or worse, a derailment. GREX (a Loram Company), for example, developed a LiDAR-based technology called BallastSaver®, which analyzes existing ballast profile and compares it to an idealized profile, identifying ballast deficiencies in the process.

LiDAR surveys are fast and safe to conduct. LiDAR systems can be mounted on moving vehicles. For rail right-of-way surveys, they can be deployed on m/w vehicles (track geometry cars, hi-rail inspection trucks, etc.). This means the systems can survey a broad area in a short amount of time. Rail operations don’t need to be interrupted, and survey personnel aren’t put at risk by having to be on the ground, and the amount of people needed to carry out a survey us reduced. One of the core reasons behind the Indian Railways’ decision to adopt LiDAR technology was to limit human involvement in rail surveys.

New railway lines can be planned in a virtual setting.  LiDAR surveys can gather information from surrounding land to plan the most efficient railroad route, taking into account the terrain and any existing structures or obstacles. LiDAR data can also be used to evaluate existing right-of-way to identify a new line will best converge. Some point cloud processing* software allows planners and engineers to manipulate a 3D digital model of the surveyed area, in a virtual setting. Planning in a “virtual world” makes the planning process more visual and intuitive.

LiDAR data can be used to plan or improve transportation facilities and structures. As well as analyzing right-of-way condition and planning new routes, LiDAR data can be used to plan or improve facilities such as stations, or structures such as bridges and tunnels. Survey data can be used to create footprints of existing buildings, creating a clearer idea of space restrictions, identifying opportunity for renovation or demolition. Some point cloud processing software enables virtual construction, so that structures and scale can be tested within the safety of the virtual world. Companies such as Bentley Systems import point cloud data into their BIM (Building Information Modeling) 3D software to plan and design facilities and structures.

* A point cloud is a set of data points in space. As the output of 3D scanning processes, point clouds are used for many purposes, including creation of 3D CAD models for manufactured parts, metrology and quality inspection, and for a multitude of visualization, animation, rendering and mass customization applications.