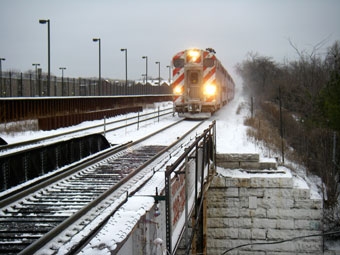 While most of the Fiscal Years 2015-2020 plan is earmarked for 1,845 miles of highway and replacing or rehabilitating 384 bridges across Illinois, there are several major regional/commuter and intercity rail programs on the agenda:

• $60 million to re-establish passenger rail service, which includes a new station in South Elgin for the Chicago-Rockford-Dubuque Corridor in Cook, DuPage and Kane Counties.

• $585.1 million to purchase up to 160 Highliner commuter railcars for Metra Electric.

• $222 million to provide new intercity passenger rail service between Chicago and Moline for the Chicago-Quad Cities-Iowa City Corridor in Cook and DuPage Counties.

• $132.6 million for the Englewood Flyover, a key part of the CREATE Program that will reduce Amtrak, Metra, and freight rail congestion.

For Fiscal Year 2015, which begins July 1, 2014, the program has allocated $1.88 billion for road projects, $1.85 billion for public transportation, $2.7 million for main line rail, and $161 million for airport improvements. For the six years of the plan, a total of $5.82 billion is targeted to state highway system improvements, with $2.77 billion going toward local transportation.

The plan includes $6.99 billion in anticipated federal funds, $1.16 billion in state funds and the remaining $450 million from local and other sources. The $158 million remaining for road and bridge projects from Governor Quinn’s Illinois Jobs Now! capital construction program is also included in this multi-year program.

Quinn is also asking the Illinois General Assembly to form a bipartisan working group to establish the next capital bill “to ensure that Illinois roads, rail, transit, and airports receive additional funding to [help make them] reliable and efficient for the future.”

Quinn says the projects are part of his agenda “to create jobs and build a 21st century infrastructure that will drive Illinois’ economy forward. The new multi-year transportation program is “designed to build upon the success of [my] $31 billion Illinois Jobs Now! program, which is the largest construction program in Illinois history. This comprehensive plan for our highways, public transit, rail, and airport projects will make critical repairs and major improvements across Illinois. A booming economy requires a 21st century infrastructure. Our infrastructure plan will create thousands of construction jobs now, while paving the way for more jobs and economic development in the future.”

“We have made tremendous progress the past few years toward improving the state’s transportation infrastructure,” Illinois Transportation Secretary Ann Schneider said. “However, with federal revenue sources dwindling and the end in sight for Governor Quinn’s Illinois Jobs Now! program, I look forward to supporting the Governor’s call for a bipartisan working group to find ways to continue this progress.”