Phillip A. Washington, CEO of the Los Angeles County Metropolitan Transportation Authority (Metro), has informed the Board of Directors that he will step down when his contract expires in May. In addition, the Surface Transportation Board (STB) has designated Robert Primus as Vice Chairman. Henry (Hank) Gutman has been appointed Commissioner of the New York City Department of Transportation.

Phil Washington has run Metro since 2015, managing a balanced budget in excess of $7 billion and capital projects totaling approximately $20 billion; and overseeing an agency with 11,000 employees that transports (pre-pandemic) 1.2 million riders daily on a fleet of 2,200 clean-air buses and six rail lines.

Among his achievements: passage of Measure M, the largest transportation investment ballot measure in North America; securing $9 billion in grant funding over the past five years; and advancing workforce development and equity, as he created opportunities for small, women-owned, minority-owned and veteran-owned businesses.

Washington recently led the U.S. Department of Transportation Agency Review Team (ART) for the Biden-Harris Transition team. Additionally, he was a past Chair of the American Public Transportation Association. Prior to joining Metro, Washington served as CEO for the Denver Regional Transportation District.

The Metro Board will conduct a national search for the next CEO.

“It has been my distinct pleasure and absolute honor to serve and lead Metro’s nearly 11,000 employees for the last six years,” Washington said. “I leave with great satisfaction knowing that working together we have improved mobility and increased access to opportunity for all residents of L.A. County, and weathered the most devastating health crisis of the past century. We have quickened the sense and pace of public service and left L.A. County’s mobility space better than it was.”

“Phil Washington has been a visionary leader, reimagining our transit network and steering our region toward an era of generational growth and lasting progress,” Los Angeles Mayor and Metro Board Chair Eric Garcetti said. “With Phil at the helm, Metro had a clear direction, strong steward, and champion for Measure M. He leaves this agency much better than he found it, with an expanding public transportation system that remains a force for sustainability, equity, jobs, workforce development and shared prosperity across the L.A. area.”

Robert Primus, who was sworn in as a Board member on Jan. 7, is the new STB Vice Chairman. STB’s vice chairmanship rotates among the members on an annual basis. Martin J. Oberman, who previously held the Vice Chairman position, was recently designated Chairman by President Joe Biden.

Hank Gutman has been appointed Transportation Commissioner by New York City Mayor Bill de Blasio. He will oversee the city’s transportation network of roadways; bridges; traffic and parking systems; the Staten Island Ferry; and bicycle, pedestrian and public plaza infrastructure. Gutman succeeds Polly Trottenberg, who stepped down late last year and has been tapped as U.S. Deputy Secretary of Transportation.

Gutman has served as Chair of the Brooklyn Navy Yard and on the Board of Brooklyn Bridge Park, and was a member of Mayor de Blasio’s BQE Expert Panel in 2019 and 2020. He recently retired as Partner of Simpson Thacher & Bartlett, LLP, where he headed the Intellectual Property Practice Group. 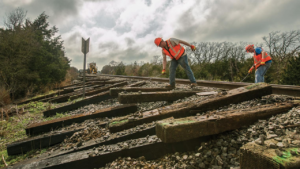