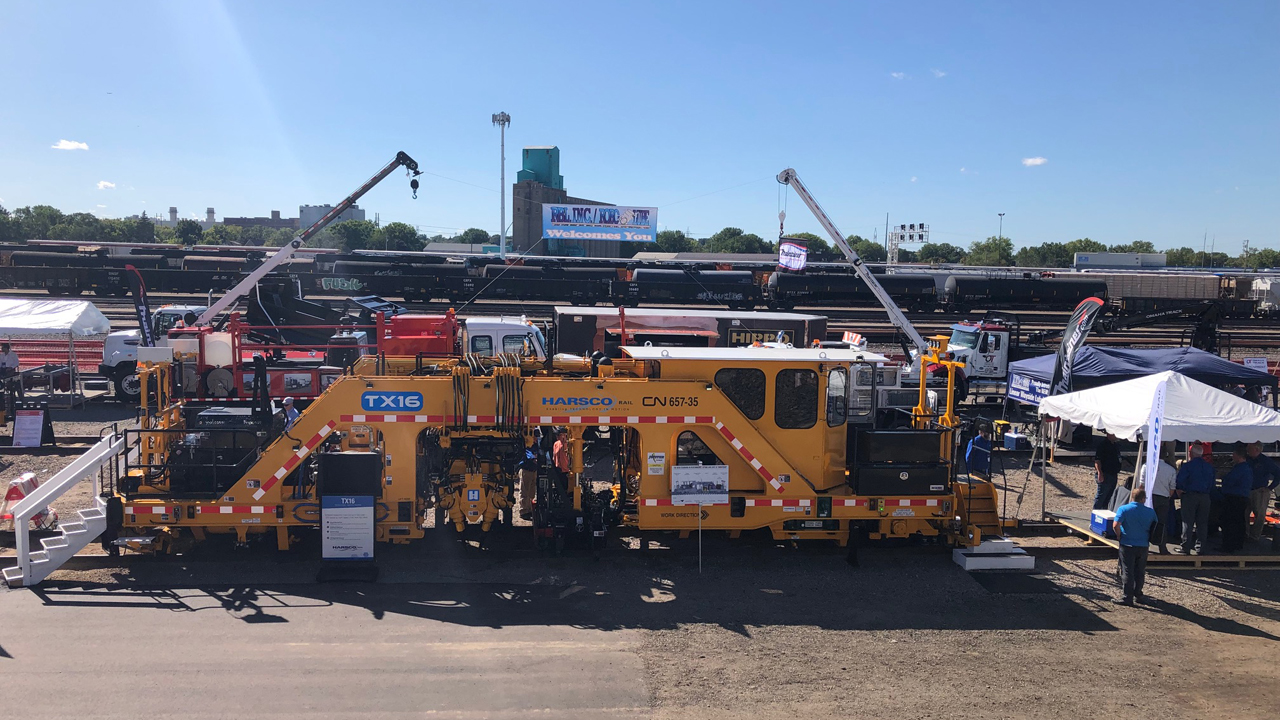 IRJ at RAILWAY INTERCHANGE 2019: One of the highlights of the outdoor exhibit was Harsco’s TX16 tamper, the supplier’s first new tamper vehicle since the 1990s, which it is supplying to CN.

Development of the tamper began three years ago, and the resulting vehicle completely rethinks Harsco’s previous models. The cab is repositioned at the front, while the vehicle deploys fully automated tamping, integrated measurement and hybrid indexing, which, in automatic mode, transforms the role of the operator to largely an observer.

The four independent tamping units on two traversing frames increase productivity by 50% compared with previous models, with the tamping completing work on 33 crossties per minute during trials, although it will tamp 30 when in service. The large window to the tamping units also offers the operator an unobstructed view of the lifting hooks, tamping unit and the track while the vehicle’s eight onboard cameras provide a complete view of all areas of the vehicle. The seat in the cab also rotates 360 degrees.

Traction is provided by a 350kW Cummins 9L diesel engine. The TX16 has a top speed of 30 mph, which is aided by single-point non-contact measurements. It also offers continuous rail contact for immediate track lifting, although it lacks third rail lifting, but as the vehicle is designed for Class I’s this was not considered necessary during the development process. The tamping units are adjustable for skewed ties, and for use in curves and turnouts.

The tamper is compatible with Harsco’s Callisto track geometry suite developed by its Protran subsidiary, which pre records track geometry measurements. Currently, this data is retrieved using a hi-rail vehicle and transferred and uploaded from a memory stick. However, Harsco is developing a cloud-based solution that could use a cellular data upload process. A further optional feature for the vehicle is a drone package that allows the TX16 to act as the lead machine to a drone chase tamper.

Trials of the vehicle have taken place on a 10-mile stretch of Norfolk Southern main line in South Carolina, and following Railway Interchange, it will be transported to Winnipeg for one month of trials with CN. During the winter, the TX16 will return south for further tests in Memphis ahead of deployment next summer for one year of in-service tests.