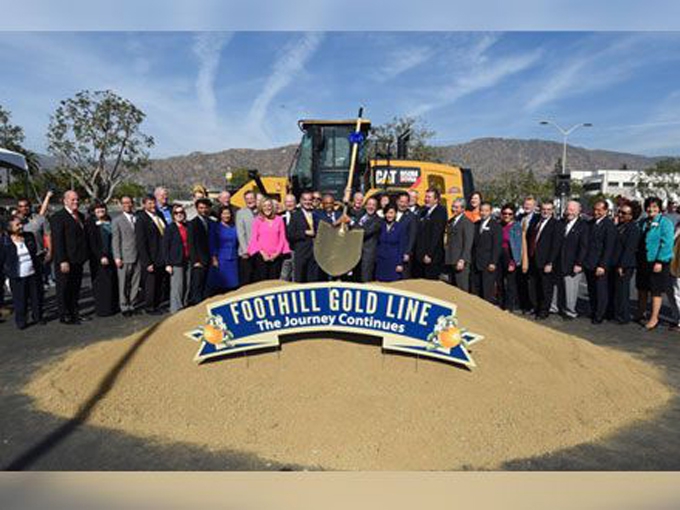 The construction authority said elected representatives from all levels of government, as well as transportation officials and community stakeholders, joined to celebrate the beginning of construction for the six-station, 12.3-mile extension.

Glendora Mayor Gary Boyer wrapped up the ceremony by proclaiming that Dec. 2, 2017, will be designated as Foothill Gold Line Day in the city of Glendora going forward.

“When L.A County voters passed Measure M last year, they gave us an unprecedented mandate to create hundreds of thousands of jobs and build one of the most robust public transit systems in the world,” said Los Angeles Mayor Eric Garcetti, who also serves as chair of the Los Angeles County Transportation Authority (LACMTA) Board. “Now, it’s our turn to deliver, and that work starts [now], with this promising new phase of the LACMTA Gold Line.”

“Funding the second phase of the Gold Line extension is the perfect example of what we’re trying to achieve through our agency’s comprehensive transportation plan,” said LACMTA CEO Phillip A. Washington. “As we make transit more available in new communities, we are changing the face of Southern California and creating an infrastructure inheritance for our children and grandchildren.”

During the first three years of construction, crews are expected to relocate strategic utilities and carry out pre-construction activities. A design-build contractor is also expected to be hired, and the chosen contractor will finalize the project design.

Major construction will launch in 2020 and include two construction phases. The first phase will entail relocating and rebuilding the Metrolink systems. Phase Two will include building the Gold Line light-rail system. Officials said the work is expected to be complete in 2026.

“The construction authority’s team has been working tirelessly over the last few years to ready the Glendora to Montclair segment for construction,” Foothill Gold Line CEO Habib F. Balian said. “Today is a celebration of that tremendous effort, as well as the partnership that the construction authority has with our corridor cities and Metro that allowed this project to be the first Measure M funded project to move forward. We are ready for the work ahead on this transformative project for the San Gabriel Valley.”

The Glendora to Montclair project will extend the LACMTA Gold Line light-rail line from its eastern terminus in Azusa through the San Gabriel Valley and into San Bernardino County, adding new light-rail stations in Glendora, San Dimas, La Verne, Pomona, Claremont and Montclair when completed.

The project is receiving funds from both the Los Angeles and San Bernardino counties. The portion of the project within Los Angeles County—Glendora to Claremont—is being funded in majority by the Measure M half-cent sales tax, as well as residual Measure R funds from the previous Pasadena to Azusa segment, officials said.

The portion of the extension reaching from Claremont to Montclair is funded by San Bernardino County.