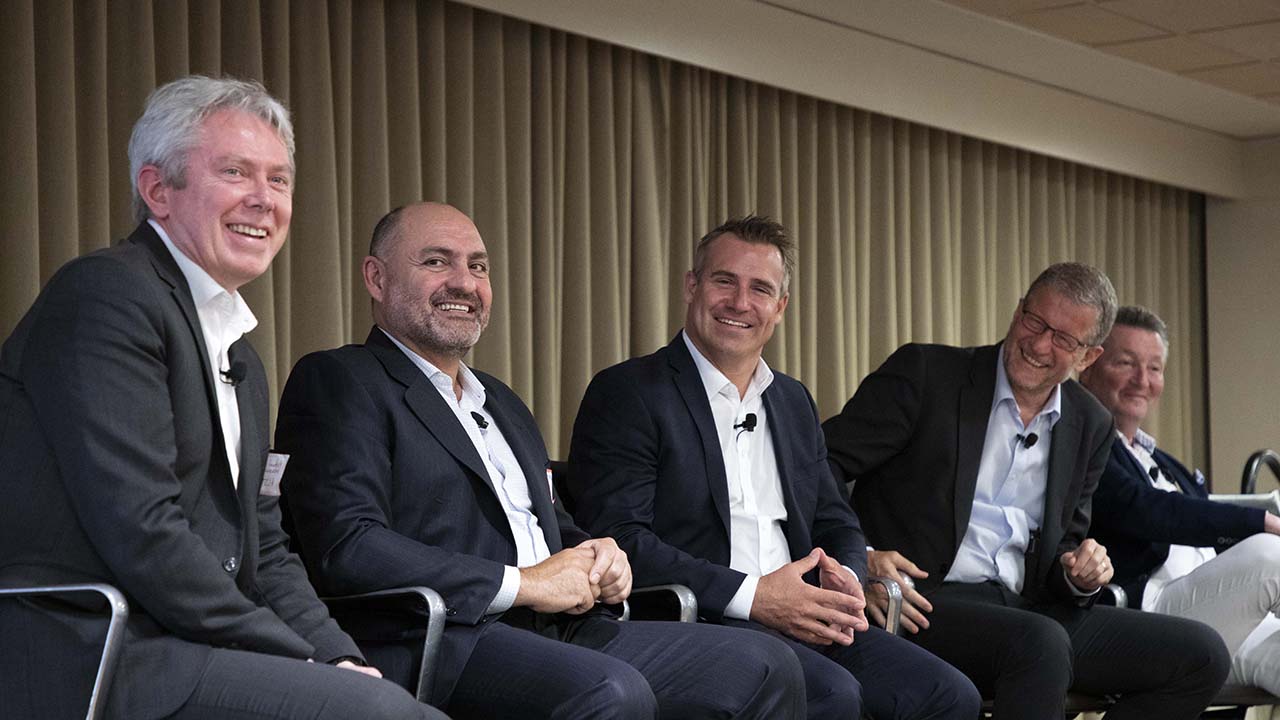 The CEOs from five of the world’s largest transportation and construction companies are putting their heads together to accomplish an unprecedented transit expansion in Toronto and the surrounding region.

The heads of major firms Aecon, Alstom Americas, DB International Operations (part of DB E.C.O. Group) and FCC Group joined Metrolinx CEO Phil Verster for a project launch meeting recently in Toronto. Metrolinx News was on hand as they discussed the next steps for the transformational GO Expansion project—including the challenges and opportunities.

With the winning partner, ONxpress Transportation Partners (which consists of the above-noted companies plus Hatch), on board, the multi-billion-dollar GO Expansion project is under way. But first, you might be wondering: what is GO Expansion? Why does it matter? The answer is simple: It’s a massive expansion of passenger rail service across the Greater Toronto and Hamilton region. When it’s done, this won’t be your parents’ GO Train anymore. GO Expansion will bring two-way, all-day GO Train service across the main GO lines. There will also be faster trains, and service every 15 minutes (or better). It’s a project that will change the way people use transit in Canada’s most populated area, and it’s now entering the development phase.

The ink is barely dry on the DBOM (design, build, operate, maintain) contract for the new era of GO Transit service. As Phil Verster, Metrolinx President and CEO, says, “Now is the time the rubber hits the road.” That means Metrolinx and the newly formed company ONxpress are immediately diving into the development phase. Throughout this two-year phase, the teams will work together to finalize the project scope, pricing, design and construction schedules. This stage is all about establishing a foundation.

Two years might sound like a lot, but to pull off what Verster calls “a total transformation of what the GO network looks like,” it’s not a ton of time, as you can see in this chart:

And while planning is taking place, there’s already more than C$10 billion of preliminary GO Expansion work under way. This work will modernize stations (including Toronto Union Station), build new tunnels and bridges, and much more.

“There couldn’t have been a better time to build this project,” says Verster. That might sound a bit surprising coming from the man at the precipice of a massive transit build, in a world feeling the effects of COVID-19, inflation and international conflict. But as Verster notes, in a post pandemic world, transit is changing. He predicts that with the conventional workday evolving, people will need shorter, more frequent trains throughout the day. Verster says now is the time to evolve our transit infrastructure. Add this to a demand for transit and increasing migration to the Greater Toronto and Hamilton Area, and the pressure will only continue to rise for better public transit.

One of the big players on the GO Expansion team, Alstom Americas President and CEO Michael Keroullé, couldn’t agree more. “You can’t just add lanes on the highway; you need something much bigger,” Keroullé says. “I completely disagree with anyone that says this plan is too big. We are very confident the GO Expansion program will be great for GO Transit customers, and exactly what this region needs.”

It’s clear the pandemic has presented opportunities to accommodate changing work styles. However, it has also brought many challenges for transit projects.

The construction world is not immune to the labor shortage facing much of the globe. And with so many projects happening in North America, the GO Expansion and ONxpress teams need people to help. The shortage may appear to present worries for GO Expansion. But given the project’s importance, these CEOs are confident people will be eager to contribute.

Pablo Colio, CEO of FCC Group, says that with a project of this size and scope, attracting the right people is very doable. “The excitement has been set, and I think the goals of this project should be enough to attract the best people,” says Colio.

Jean-Louis Servranckx, President and CEO of Aecon, is even more bullish on bucking the labor shortage trend. “I’m confident we are going to be able to attract really good people,” he says. “We have been dreaming about this two-year development phase, where together we can make it happen—and it has to start now.”

Keroullé is familiar with the challenges of running a fleet dependent on fossil fuels. As head of Alstom Americas, the current operator of GO Trains, the prospect of introducing an entirely new electric fleet is one of the most exciting parts about GO Expansion. Looking overseas, 60% of European rail is electrified. With GO Expansion, customers can not only be proud of the iconic green on the outside of the trains, but also the green propulsion on the inside of the trains.

With only 1% of North America’s rail lines electrified, GO Expansion could be a trendsetter for the rest of the continent. According to the 2018 GO Expansion Full Business Case, the program will bring C$220 million in greenhouse gas reduction benefits, which is related to the removal of cars from roads as people switch over to transit and system electrification.

Looking Toward the Future

Having the leaders of five international firms working hand in hand toward a common goal is extremely handy. The decades of worldly experience from key leaders at companies like Aecon, FCC, Alstom and DB International Operations gives Verster a lot of confidence. “I’m an eternal optimist. I think we have the right people, and we are going to tackle everything together as a team,” he says.

And as some of the brightest minds come together in Toronto to work on what Warbanoff calls a “transit revolution,” the world is looking at the GO Expansion project as the north star of transit projects.