Knoxville Locomotive Works (KLW) has repowered, refurbished, remanufactured, and/or upgraded more than 400 locomotives since its establishment in 1998. The company’s most recent offering is a fleet of nine SE Series switchers constructed with the assistance of Texas Emissions Reduction Program (TERP) funds.

he project, conducted for Locomotive Solutions of Houston and Baton Rouge, originated from applications submitted under the TERP program, which is administered by a funding department within the TCEQ (Texas Commission on Environmental Quality). TERP is a biennium funding program for obtaining ERIG (Emissions Reduction Incentive Grants). Under the TERP program, Locomotive Solutions was awarded a contract for nine repowered units using KLW’s drive train system, which consists of an MTU Tier 4i engine platform for 1,050 BHP (brake horsepower) and 1,560 BHP engines. The company says that, effectively, 80% of the cost of the top-deck repower is reimbursed through the award of emissions reduction incentive grants.

The nine KLW SE Series switchers, models SE15B and SE10B, are destined for Chevron refineries in the Houston and Beaumont-Port Arthur, Tex., non-attainment areas. The first unit was christened on Friday, Dec. 16.

The KLW SE15B and SE10B are switcher locomotives that are 1,560 BHP and 1,050 BHP respectively. Utilizing four-axle EMD and GE cores, both models weigh up to 276,000 pounds and are fitted with an MTU Series 2000 diesel engine, ZF Friedrichshafen AG reduction gearbox, a TMV Control Systems Inc. Traction and Engine Control Unit (TECU), and other modern technology. “These switcher locomotives are some of the lowest-emitting units ever created and offer superb fuel savings,” the company says. “The SE15B and SE10B models are also the only switcher locomotives in existence to use a high-speed diesel engine with the low-speed AR10 alternator.”

The MTU engines are made in Aiken, S.C. Currently certified to EPA Tier 4i off-highway standards, the 12V and 16V Series 2000 engines offer estimated emissions reductions of up to 90%, making them “excellent solutions for switching in highly populated areas, which is one reason why they qualify for many government-funded emissions-reduction programs,” the company says.

KLW says that, in addition to ultra-low emissions, the SE15B and SE10B reduce fuel consumption by 30-50% compared to similar horsepower locomotives and up to 60% (SE10B) when replacing a higher horsepower locomotive, “thanks to improvements in tractive effort. In many operations, this means savings in the tens of thousands of dollars or more per year.”

The TMV TECU controls the traction alternator, engine speed/power, wheelslip, cooling fans, direction control, automatic engine start-stop (AESS), among other functions. KLW says the TECU is about one-fourth the size of a typical Dash-2 module rack “and as a result features much less wiring than older electronic systems.” A touchscreen is also provided so that operating and maintenance crews can monitor the locomotive’s diagnostics, including faults, in real-time.

One of the key features of TMV’s TECU system is wheelslip control. “By monitoring the traction motors and each axle, the TECU can prevent wheelslips from occurring,” the company says. “This increases the starting tractive effort significantly, up to 40% in certain conditions, compared to older wheelslip control systems. Increasing the starting tractive effort allows the locomotive to do more work than it could before the repower process. Preventing wheelslips and increasing traction also reduces the wear and tear on wheels and on track.”

“What sets KLW locomotives apart is our unique approach to locomotive repowers,” the company says. “Each KLW model uses a single MTU high-speed engine with a low-speed AR10 traction alternator. This is possible by using a ZF 2:1 reduction gearbox with the MTU engine. The gearbox converts the RPMs from the MTU engine (up to 1,800 RPM) down to a lower speed (up to 900 RPM), making the MTU engine compatible with the AR10. The ZF gearbox is joined to the AR10 with a double-bearing adapter (designed and patented by KLW) and a Geislinger Butterfly or Centa coupling, for higher or lower-horsepower applications, respectively.

“Although the engine and gearbox setup is unique to our product line, KLW actually re-utilizes many of the unit’s original components. In addition to the AR10, the trucks, traction motors, wheels, and other items are retained and rebuilt if possible. By retaining common components, the KLW line of locomotives are more familiar to the railroad industry than much of the competition and consequently require minimal training. This approach also reduces costs and makes it easy to find replacement parts.

“KLW is the only single-engine green locomotive manufacturer that offers locomotives from 1,050 hp up to 3,200 hp. As a result, we are able to offer products for operations big or small. For example, many short line and industrial operations have no need for large 3,000-plus horsepower units as they are too big, consume too much fuel, and are overkill for the work that needs to be done. On the other hand, large operations such as Class I switching yards would have no interest in anything under 2,000 or even 3,000 hp, as they need this extra horsepower and size to move large cuts of freight cars. KLW is proud to be the only single-engine manufacturer that offers green locomotives for everyone.” 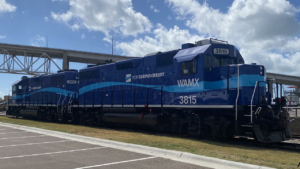