Progress Rail says DGB “provides lower fuel costs with more than 60% substitution of diesel with natural gas—up to 70% gas substitution has been demonstrated. DGB is a dual-fuel solution, and the locomotive can also run on 100% diesel. Locomotives operating with our DGB retrofit kits will maintain the same performance, power, transient response, reliability and maintenance as [conventional diesel] locomotives.

DIG “provides for even lower fuel costs, with 95%-plus substitution of diesel with natural gas. Similar to DGB, locomotives with our DIG system will maintain the performance and reliability of existing diesel engines.”

Progress Rail has been conducting field tests on DGB for more than two years and has completed more 40,000 miles. DGB validation is expected to be complete in 2017. Production launch for DGB retrofit kits is scheduled for next year in North America, with other markets to follow. The company says that timing will depend on the availability of LNG fuel tenders.

Tests of engines with DIG technology, “which delivers the best engine performance for mobile sources,” have logged more than 100,000 hours on their injectors, Progress Rail says. DIG production launch is planned for 2018. 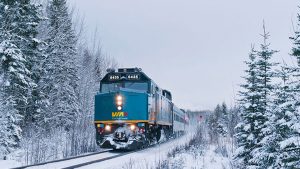