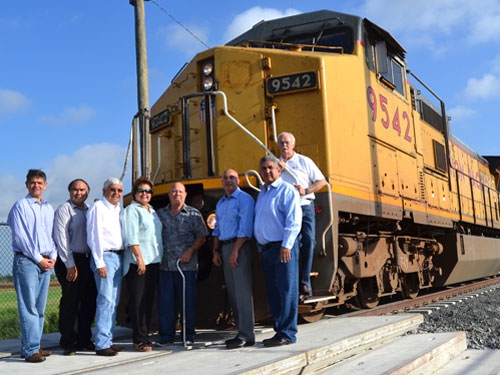 Cameron County, the city of Brownsville and the Cameron County Regional Mobility Authority (CCRMA), all located in Texas, have been working on the rail relocation project for the past 15 years.

“This is a project that will leave a lasting effect on our community for many years to come,” said Cameron County Judge Pete Sepulveda, Jr. “Providing this new link to move goods and services more efficiently is going to bring enormous advantages and opportunities to the consumer, the supplier and to markets throughout North America and the world.”

“This project puts the Rio Grande Valley on the map,” explained David Allex, CCRMA chairman and an expert in logistics and economic development. “To have this new transportation artery that will help serve our region on both sides of the border is paramount to the success of the region. I know that we will be able to attract more investment to the region because of this project.”

The West Rail Project includes the first new international rail bridge built between the United States and Mexico in the past l00 years and a six-mile rail line on the U.S. side, replacing the existing rail connection between Brownsville and Matamoros, Mexico. The project prioritizes border security and includes X-Ray scanning machines to scan rail cars for illicit cash, drugs and other contraband.

The project also improves safety, travel time and the free flow of legal trade between the U.S. and Mexico, benefitting Texas jobs and economic opportunity. Fourteen grade crossings were eliminated in the Brownsville area, including some nearby school zones. Shifting rail traffic out of the congested areas will help speed the flow of legal goods moving between the two countries.

The entire project’s final price tag exceeded $120 million, with about $75 million of infrastructure investment on the Mexico portion of the project.