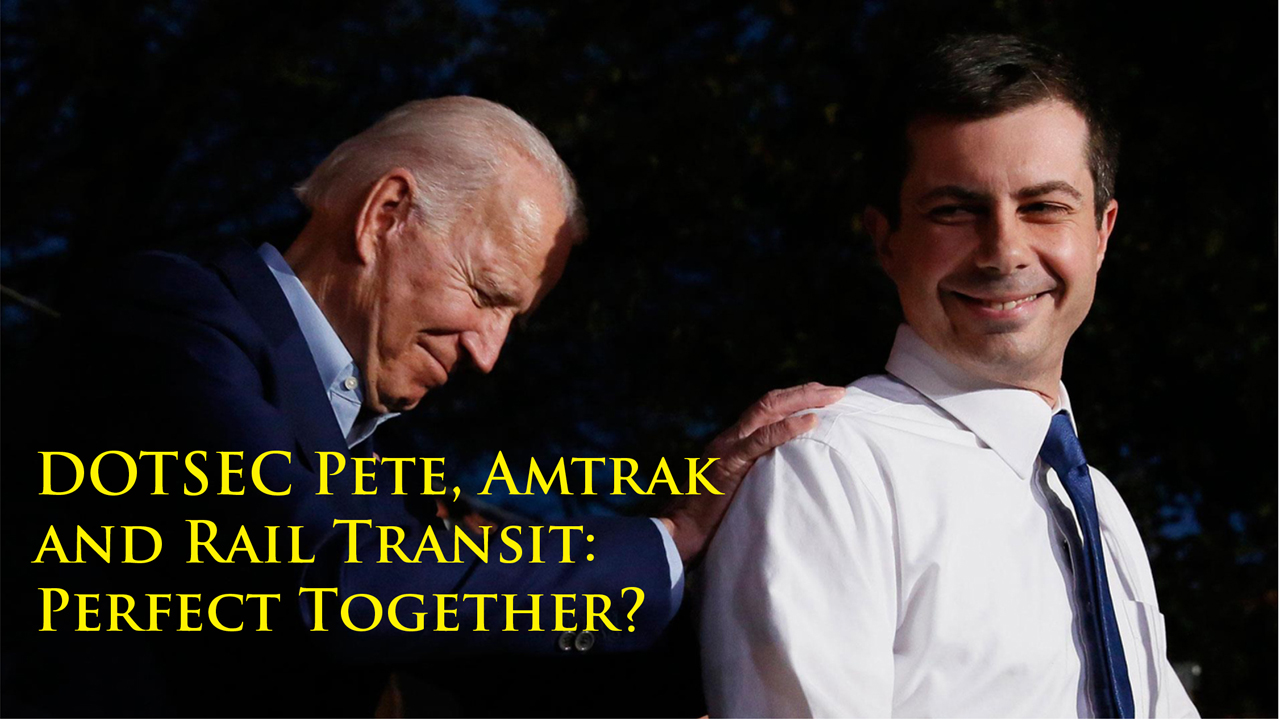 President-elect Joe Biden has selected Pete Buttigieg to be the next Secretary of Transportation, as Railway Age reported on Dec. 15. This news report noted his experience, particularly as mayor of South Bend, Ind., and included a number of laudatory statements from industry leaders, including one from labor. Indeed, it would be unwise for any of those industry leaders to appear less enthusiastic than that concerning any such nominee, and risk the ire that could result. The question in my mind is, what will Buttigieg’s appointment mean for Amtrak and rail transit customers, or anyone who represents those constituencies.

This article is the first in a three-part series. I will look at the future “Secretary Pete” from a rider’s perspective, and will attempt to make an educated guess about how well riders on Amtrak and transit will fare on his watch. In this article, I will examine Buttigieg’s attributes, as he articulated them in his acceptance speech. I will also look at who his constituents will be as he takes his new position, and I will compare him with other recent occupants of his anticipated post.

In Part 2, I will examine the “Smart Streets” policy that Buttigieg espoused as mayor, and the transit available in South Bend throughout his term as mayor: now-sporadic Amtrak service between the East and Chicago, the NICTD South Shore Line between South Bend and the Windy City, and South Bend’s only local transit, the buses in the Transpo system. In Part 3, I will present perspectives on Buttigieg’s potential performance from rail advocates, assess why he is the nominee at this particular time, and what he can do to improve mobility for Amtrak passengers and transit riders.

I assume that the Senate will confirm his nomination and allow him to take office. Historically, most appointees have been approved, and as Railway Age reported on Jan. 7, Elaine Chao is leaving that post early. “We will help my announced successor, Mayor Pete Buttigieg, with taking on the responsibility of running this wonderful department,” she said.  If Chao’s husband, outgoing Senate Republican leader Mitch McConnell, had objected to Buttigieg’s nomination, it is unlikely that Chao would have welcomed him aboard. With the election results in Georgia tipping the balance in the Senate, it now appears that confirming Buttigieg will be easy.

What does Buttigieg bring to the table? Basically, he’s young, turning 39 within a few days of Biden’s 78th birthday. He’s also the first major openly gay presidential candidate to win a state caucus or primary in American history, and one of the youngest candidates ever to do so. As such, he will add “diversity points” to Biden’s cabinet and help fulfill a major campaign promise.

In his Dec. 16 acceptance speech, Buttigieg mentioned many modes of transportation with which he is familiar, and often spoke of “transportation” generally. He plans to boost infrastructure and spend the money to build it, in accordance with another Biden campaign promise and a standard message for anybody who holds the portfolio to which he has been nominated. “America has given this Administration a mandate to build back better, and step 1 of building back better, literally, is to build. Americans expect us to see to it that the idea of an ‘Infrastructure Week’ is associated with results and never again a media punchline.”

Biden has called for spending $2 trillion on infrastructure in upcoming years. Given the economic decline that the nation has suffered since the COVID-19 virus hit, that seems like more than the nation’s taxpayers can afford, even if a successful vaccination campaign this year manages to hold the virus at bay. In addition, it would still not be easy to get the Senate to approve that much spending, because Republicans and some fiscally-conservative “blue dog” Democrats could join forces and object to such a large amount.

Covering All the Bases, Mostly

If general support for the concept of “transportation” is enough, Buttigieg punched all the right tickets. But did he punch the tickets for riders on Amtrak and rail transit, including the South Shore Line, a “commuter railroad” with one end in his city of South Bend and the other in Chicago?

From what I have learned, it is not possible to answer that question in the affirmative at this time. There are positive and negative aspects to his record, from a rider’s viewpoint. He mentioned that he supported the Obama-Biden Administration’s rescue of the auto industry. That program helped that industry, but there was no comparable assistance for transit providers or their riders, even though transit was suffering during the Democrats’ previous Administration, too.

Buttigieg reminisced about riding Amtrak in his college days: “More than once as a college student, I would convince a friend to travel nearly 1,000 miles back to Indiana with me on Amtrak. In this Administration, I will aspire to be at least the second-best train enthusiast around.” I will examine that proposition more closely in the near future, but Buttigieg did not mention having ridden an Amtrak train since then. He went to Harvard (Class of 2004), so he rode the Lake Shore Limited between Boston and South Bend. I was also an undergrad in the Boston area (M.I.T.) almost 35 years earlier, and rode the classic Merchants’ Limited between Boston and New York on the historic New Haven Shore Line, now the northern half of Amtrak’s Northeast Corridor (NEC). I have ridden Amtrak trains since the railroad was founded, as recently as this past fall. I hope that the future Secretary-designate has ridden Amtrak through the years, too.

Buttigieg espoused some policies that promote downtown South Bend as a viable destination, including supporting the return of the South Shore Line’s terminal to the downtown area. He mentioned a “regional collaboration to improve rail service” while he was mayor of that city. He held the office from 2012 until recently, and implemented an initiative called “Smart Streets” that I will describe in the next article in this series.

Who are the Secretary of Transportation’s constituents? It appears they are the consulting firms, construction companies and unions that represent the construction workers, all of whom stand to gain from grants issued by all USDOT agencies. Much of the money goes to highways, so highway builders and contractors, along with motorists indirectly, are the beneficiaries of DOT generosity. That is true of the aviation component, and there is some for transit through the Federal Transit Administration and rail projects through the Federal Railroad Administration (FRA).

These grants are for capital projects, and there is always an opportunity cost that comes with every project. Simply stated, money spent on a mega-project could sweep more-modest and less-expensive projects aside, and the riders could be the losers in such a situation.  Buttigieg could do much for the “Transportation Industrial Complex,” as New York MTA Chair Pat Foye called it. What he would do for riders?

Other Recent Secretaries of Transportation

What sorts of credentials did other recent Transportation Secretaries hold? Looking back on the Obama-Biden Administration and the Trump Administration, they had few credentials that would have made it clear that Amtrak and transit riders were considered genuine stakeholders in DOT’s affairs.

Obama’s first pick was Ray LaHood, a Republican House member from central Illinois. His biggest constituent was Caterpillar. Lahood served from 1995 until 2009, representing the 18th Congressional District. He was in office during the 2006’ expansion of state-sponsored Amtrak service. During his tenure as DOTSEC, Illinois secured billions from the Obama/Biden High Speed Intercity grant program for the Chicago-St. Louis HrSR (higher-speed rail) corridor, which goes through Springfield, Ill., in his former district.

LaHood was replaced by Anthony Foxx, a popular Southern mayor whose city (Charlotte) has a large bus system, one light rail line of respectable length, and a short streetcar line. There were plans to add more light rail and a commuter rail line, but those plans were never implemented. There were also plans to move the Amtrak station to a downtown location, but the 1950s-era station in an industrial zone miles north of Uptown Charlotte (the local expression for the urban core) is still in use.

Elaine Chao held the post throughout the Trump Administration, except for the final nine days of it. She put in time at the Heritage Foundation, which is known for its strong opposition to Amtrak and transit as wastes of taxpayer money. Politically, her most important credential is unbeatable, since her husband is Mitch McConnell, who—presumably as Senate Minority Leader—will probably oppose Biden-Harris policies as much as he opposed Obama-Biden policies. With Georgia’s voters changing the picture in the Senate, though, McConnell’s influence will not be as strong as it was when he controlled the Senate’s agenda as Majority Leader.

Where does Pete Buttigieg stand in comparison to his recent predecessors? Probably about where Anthony Foxx stood, except that transit in today’s South Bend is not nearly as strong as the transit in Charlotte. Buses in Charlotte run seven days a week, including in the evening. Most run more often than every hour, or every half-hour at busier times. Charlotte also has rail transit that goes through its core, unlike the South Shore Line, which is tangential at best (including its location) to mobility in South Bend. Buttigieg has committed himself to policies that have started to improve downtown South Bend, and he deserves credit for that. Whether or not he can establish himself as an advocate for Amtrak and transit riders remains to be seen.

Buttigieg implemented a policy in South Bend called “Smart Streets,” an example of a “complete streets” plan. That policy seems to be improving downtown South Bend, but transit there remains weak. I will look at that policy and today’s transit in “Mayor Pete’s” city in Part 2 of this series.

David Peter Alan is one of America’s most experienced transit users and advocates, having ridden every rail transit line in the U.S., and most Canadian systems. He has also ridden the entire Amtrak network and most of the routes on VIA Rail. His advocacy on the national scene focuses on the Rail Users’ Network (RUN), where he has been a Board member since 2005. Locally in New Jersey, he served as Chair of the Lackawanna Coalition for 21 years, and remains a member. He is also a member of NJ Transit]s Senior Citizens and Disabled Residents Transportation Advisory Committee (SCDRTAC). When not writing or traveling, he practices law in the fields of Intellectual Property (Patents, Trademarks and Copyright) and business law. The opinions expressed here are his own.