I could answer this question in one word:

But then I’d be accused of being a Democrat, which I’m not, or perhaps (oh, the humanity!) a Libertarian, or maybe even a Communist or Socialist—who knows? For the record, I’m not registered with any political party, Republican included. This prevents people from trying to stick me in a box and attach a label, which I would find particularly uncomfortable. This also prevents me from voting in a primary election, but at least I don’t generally receive annoying pre-recorded phone calls (which I don’t listen to) and political junk mail (which I don’t read before it goes to the trash—ooops, recycling—can).

Let’s face it: Too many politicians do too many dumb, harmful things, purely for the sake of being partisan. I’m cynical enough to know that this is how the game is played, and how politicians get re-elected and rise in the ranks of their chosen party and get money for their campaign coffers and prime-time sound bytes on CNN, MSNBC, and Fox “News”, and a lot of other perks that come with being an elected official.

If you want to attach a label to me, call me a “railroad guy.” Freight rail? That’s a no-brainer. Anything that can be hauled on a train instead of a truck should be on a train—period. Passenger rail? “Build it and they will ride.” That’s why the all-too-common political shenanigans or posturing that prevent the expansion of passenger rail in this country always gets me going.

Unfortunately, in the case of high speed rail, the perpetrators with the political sledgehammers and baseball bats are Republicans. Why? I haven’t a clue. It’s just the way too many of them think.

Projects get planned; projects get partially funded; projects get killed. It’s happened before and probably will happen again. Meanwhile, the United States falls farther and farther behind the rest of the developed world in passenger rail, despite bright spots like the Northeast Corridor and Chicago-St. Louis and the Pacific Northwest, which aren’t really “true” high speed but higher-speed systems. California—if it ever gets under way—will become our first high speed system (well . . . segment).

We’d have a whole lot more bright spots if there weren’t so many dim bulbs on Capitol Hill and in certain statehouses. I recently reported on the trials and tribulations of Talgo USA in Wisconsin, and how Gov. Scott Walker pulled the plug on a signed contract. There’s more to that story than meets the eye.

Some would suggest that Walker, Florida Gov. Rick Scott, and Ohio Gov. John Kasich—all Republicans elected to their posts in the 2010 mid-term elections—are the “unholy trinity” of passenger rail. All three said “we don’t want your damn passenger train money” and promptly mailed rejection notices to the Federal Railroad Administration—which promptly gave the funds to places that willingly accepted them. Florida’s loss is New Jersey’s gain (think the Northeast Corridor’s “New Jersey Raceway” improvement project). Now, listen up youse guys: I’m from New Joisey, and as far as I’m concerned, if dat Scott character in Tallahassee don’t want his freakin’ high speed train cash, we’ll be glad to take it off his hands!

As one observer put it, “At the time, the three governors cited fiscal responsibility as their official reasoning, but the situation always had the feel of political collusion.”

Florida’s story is particularly telling. I’ve been wanting to unravel the tepid tapestry of political back-room dealings that killed the Tampa-to-Orlando high speed project, but it turns out that the Tampa Tribune did it for me. Wrote William March in the Oct. 30 issue of the newspaper:

“Former State Sen. Paula Dockery, a former political ally of Gov. Rick Scott but now a critic, says Scott assured her shortly after taking office in early 2011 that he planned to accept $2.4 billion in federal economic stimulus money for a Tampa-Orlando high speed rail system. That was days before he announced he was rejecting the money, creating a national political stir.

“In an interview and at a recent Tiger Bay Club speech, Dockery said Scott made her the promise during a private conversation after a dinner at the governor’s mansion in early February 2011. She said Scott also told her he hoped to stop work on another rail project, the SunRail central Florida commuter line, which had passed the State Legislature before he took office. Scott later approved continuing SunRail.

“Democrats, rail advocates, and others have criticized Scott for turning down the high speed plan, saying it cost Florida an opportunity to create jobs while getting started on a system that could alleviate Central Florida’s bad and worsening traffic congestion. The Tampa-Orlando line was intended to be the centerpiece of an initiative by the Obama Administration to begin a nationwide high speed rail network.

“Some rail transportation advocates, including Dockery, opposed SunRail as a bad deal for Florida taxpayers.

“Scott’s press office didn’t respond directly to a request to confirm or deny Dockery’s account. Instead, a press spokesman sent links to documents and news clips stating Scott’s public position on the issue.

“Dockery, a public affairs columnist, writes opinion articles that appear in publications including The Tampa Tribune. She said the dinner at the governor’s mansion was for the handful of legislators who had supported Scott in the 2010 Republican gubernatorial primary against Bill McCollum, the choice of the Republican Party establishment for the nomination.

“Dockery, a Republican and at the time a state senator from Lakeland, campaigned for governor in the primary. She dropped out after Scott entered the primary race because she thought she and Scott would split the anti-McCollum vote and that Scott’s plans to spend millions of his own money on his campaign meant she would have no chance. Scott then asked her to be his adviser on environment and transportation issues, she said. Whether Scott would back the high speed rail and SunRail projects became a subject of intense speculation after he won the governorship in November 2010.

“During his campaign, including at a debate in October with Democratic opponent Adelaide Sink, Scott had expressed skepticism about the high speed rail project but not outright rejection.

“Dockery said Scott hadn’t been fully briefed on it at the time of the mansion dinner. ‘His public statements before that evening had been lukewarm at best,’ she said in an interview. ‘People were saying it doesn’t look good, but I was saying I think he’ll be with us.’ Dockery said she had planned to brief Scott on both projects after the dinner and had brought a side-by-side comparison with her.

“When she got out the documents to start going through them, ‘He said, “You don’t have to go any further, I’ve decided I’m going to take the high speed rail money,”’ she said in her speech Sept. 20 to the Tiger Bay Club. ‘“Don’t say anything to the media about it but I’m going to take the money.” I said, “Governor, that’s fabulous.”’

Dockery said she warned Scott he would get intense pressure from fellow Republicans to reject it ‘because it looks like Obama wins’ if the project succeeds. ‘There were other Republican governors who were turning down rail money,’ she said in the interview. ‘That was kind of the national plan of the Republican governors. He said, “Don’t worry about it.” … His mind already was made up,’ she added. ‘There was no misinterpretation.’

Dockery said Scott told her his staff was investigating whether it would be possible to halt work on the SunRail project. About two weeks later, Dockery said, she got word the Governor was trying to reach her through an incorrect phone number. She immediately called him. ‘By the time I called the Governor, he had already had a press conference announcing he was going to send the money back,’ she said in the interview. She said she never told any reporters about the reversal or spoke publicly about it ‘because he asked me not to go to the media.’

“Scott announced his rejection of the high speed rail money in a Feb. 16, 2011, news conference.

“The Obama administration had offered Florida $2.4 billion for the 85-mile, Tampa-to-Orlando high speed line to run in the median of Interstate 4, where space was set aside for rail when the highway was built. It was to be the first leg of a system designed to reach Miami. By the time Scott took office, the state had begun planning work for the project, and the Legislature had committed to spend $300 million for the state’s share. Federal officials and the state Department of Transportation had said the high speed line wouldn’t cost the state any money; private bidders had pledged to pay the state’s share.

“According to a Florida DOT report, released months after Scott’s decision in a response to a Tribune public records request, two consulting firms hired to evaluate the bonds for the project said it would have shown an operating surplus within a decade. But Scott said ridership and revenue projections for rail projects ‘are historically over-optimistic’ and that the state would be forced to come up with millions in subsidies. He said construction cost overruns ‘could put Florida taxpayers on the hook for $3 billion.’ In making his case, Scott appeared to rely heavily on a study by the Reason Foundation, a Libertarian think-tank. The project director for its study had served on Scott’s transition team.”

Well, what a surprise! I didn’t know that the Reason Foundation, which supports passenger rail about as much as NASCAR would support racing convertibles without roll cages while it’s raining, was involved in this mess. But I digress. Concludes William March in the Tampa Tribune:

“Dockery has said she couldn’t support Scott for governor again, but didn’t name a candidate she would back. She said she would like to see a qualified independent candidate, and also said she admired Adelaide Sink of Tampa, who has announced she won’t run for governor.”

All this is a crying shame. Years from now, after we as a nation have hopefully gotten past all the partisan bickering and obstructionism, and the drag on our national progress and economic growth that have resulted, we will wake up and press ahead on bringing our passenger rail system into the 21st century. But we will have lost precious time. 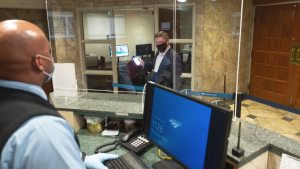