As many of you may know, I’m a motorsports fan. I’m pretty happy today, because the driver from my home state of New Jersey who I have been following since he entered NASCAR’s top-tier Cup series a few years ago, Martin Truex Jr., won his first championship in an exciting race at Homestead Miami Speedway on Nov. 19.

So, it’s onto the 2018 NASCAR season. Race teams are already in the midst of securing those all-important sponsorships, practically all of which are meant to endorse a particular product or business. They’re mostly consumer-based. If your favorite driver’s car is painted green and white and has Mountain Dew on the quarter panels and the hood (the 88 car—you know who I mean), chances are that you’re going to go and buy Mountain Dew the next time you grocery shop, even if it’s not the healthiest thing you can drink.

But not all sponsorships have the same message. There’s one particular sponsorship that has an entirely different kind of message, one that has nothing to do with buying soft drinks or patronizing a particular hardware store. This one has to do with public safety, in particular, promoting safety at highway/rail grade crossings and around railroad tracks in general. The safety issues—driving around lowered crossing gates to beat the train, trespassing on railroad tracks—are issues our industry has been dealing with for generations. And although our overall safety record has improved tremendously, thanks to initiatives like Operation Lifesaver, we must remain vigilant and continue to deliver the safety message to the public.

That’s what CSX’s Play It Safe Around Railroad Tracks NASCAR sponsorship has been all about for the past five years. This is a program I’ve been privileged to be a part of since its beginnings. It progressed from a simple bumper sticker on the rear of the 78 car in 2012 (incidentally, the car that NASCAR 2017 champion Martin Truex Jr. drives today) to a full-blown treatment of a racecar in CSX’s blue and gold locomotive scheme. CSX has used this program to reach a very critical demographic: young male adults, who research shows are most likely to do something dangerous or irresponsible around railroad tracks. Play It Safe also has had a role in maintaining good relationships with customers and with rewarding employees for being safety-conscious on the job.

I wonder if CSX is going to continue the Play It Safe program and the six- to eight-race prime sponsorship with Front Row Motorsports and the number 34 Ford Fusion, driven this year by Landon Cassill. With all the changes, both operationally and corporate, that have taken place at CSX in the past few months, I’m not so sure if the railroad is going to continue its corporate social responsibility programs with the same intense focus as it has had in previous years.

Corporate social responsibility (CSR): It’s an important leg of a three-pronged  approach to business that consists of people, planet, and profits. All companies require profits, of course, to stay in business (and deliver value to shareholders, if they’re publicly traded). But companies also need to have a stake in their people and in the communities—planet—they serve. CSR, in my mind, is of particular importance to railroads because of their widespread geographic reach, their potential impact on the environment, and the good that they can do—good that goes well beyond simply transporting goods.

We all know in this industry that railroads are good for the environment, compared to trucking, for example. We know that railroads are the most efficient form of land transportation, and the safest. But it’s not enough for us just to know that. It is also our responsibility to use creative ways to get our safety and sustainability messages out to the public, and do all we can to protect public safety.

Now, you might be saying to yourself, “Well, Vantuono loves racing, so of course he’s going to promote that.” Well, that’s only partially true. I’ll be the first to admit that few things thrill me more than experiencing a 200-mph, 850-hp stock car roaring around the high banks of Daytona International Speedway or banging fenders with competitors at a short track like Martinsville, Va., especially when it’s painted like a locomotive. However, I also strongly believe that if the safety message displayed on that car’s hood and quarter panels saves at least one life, the sponsorship program, whatever it costs, is worth it.

When I interviewed Hunter Harrison for the cover of Railway Age’s October issue, at the end of our conversation, I mentioned to him the Play It Safe program. He was unaware of it, so I took it upon myself to describe it in detail. Now, I have no idea whether Hunter will support continuation of this program, or for that matter, any other CSX Beyond Our Rails corporate sustainability program. He did give me a glimmer of hope by saying that he thought Play It Safe was something the railroad should consider continuing.

Ultimately, CSX’s decision on whether to renew the sponsorship with Front Row Motorsports for the 2018 NASCAR season will rest with a lot of people, Hunter Harrison among them. I would be very pleased to see the program continue, because I think it’s worth doing.

It doesn’t really matter where the 34 car places in qualifying or where Landon Cassill (or whoever may be at the wheel next season, and over the years there have been several good drivers) finishes in a CSX-sponsored race. What matters is that the Play It Safe message gets out to the public, and helps prevent someone from doing something foolish that will cost them life and limb. 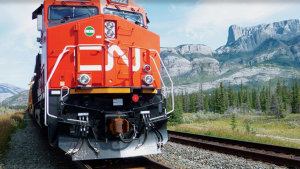 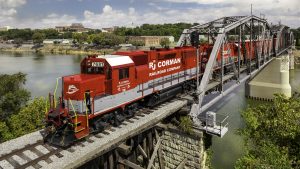 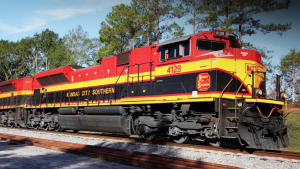