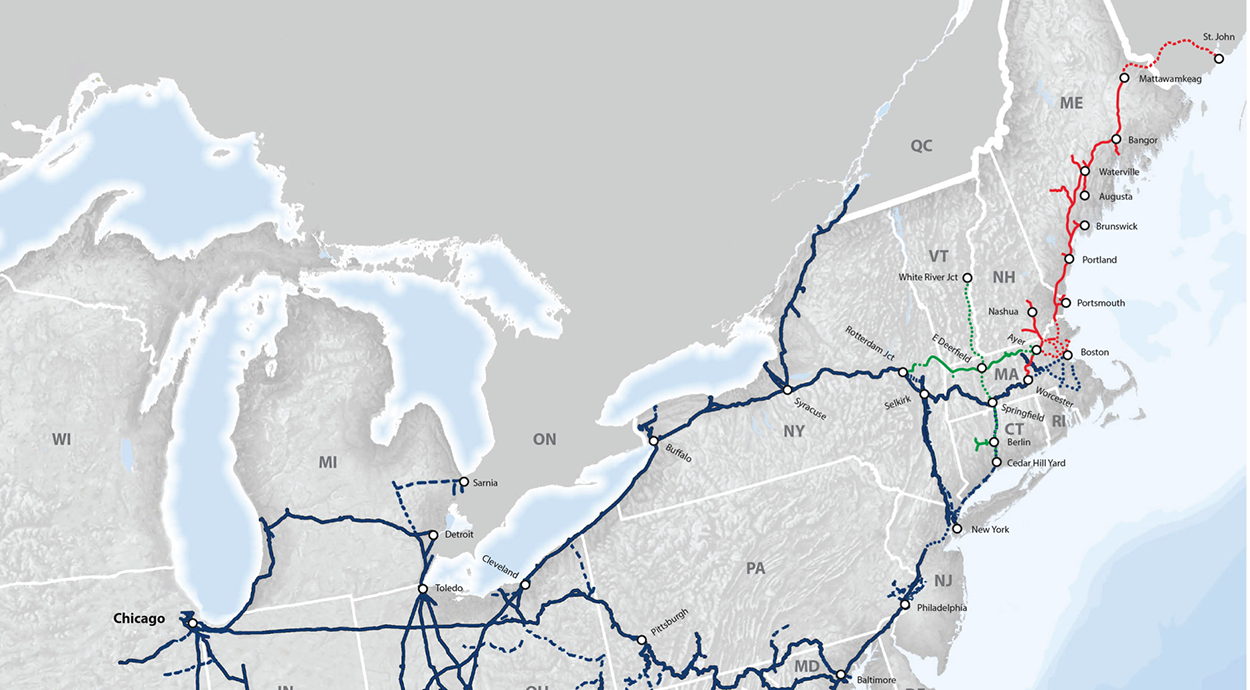 This is a case of a Class I railroad extending its reach by acquiring a Class II railroad that currently serves New England, a region that has limited Class I rail service today. Following deregulation in 1980 under the Staggers Act, there was a spate of railroad mergers, and many in Congress became concerned that the industry was rapidly being merged down to a handful of large carriers and that competition would suffer. At that time, I was working for Representative James Oberstar (D-Minn.), Chairman of the House Transportation and Infrastructure Committee as his specialist for railroad affairs. Chairman Oberstar directed me to express the Congressional concern to then-STB Chairperson Linda Morgan that railroad mergers were not being given proper scrutiny. Ms. Morgan carefully listened to our concerns and agreed to examine the Board’s procedures in assessing and approving railroad mergers.

At the time, there was yet another merger pending—a merger of two Class I railroads–but Ms. Morgan suspended consideration of that proposal and reexamined the Board’s procedures. After several months of deliberations, Chairperson Morgan announced a new set of merger guidelines that were stricter than those that had been in place. Perhaps the most important change was that a proposed merger of Class I railroads would have to show that it would enhance competition, rather than simply not diminish it. This was and remains a higher bar.

The merger that was before the STB at the time the new guidelines were developed was withdrawn, and there were no further mergers of Class I’s for the remainder of Ms. Morgan’s term. When Ms. Morgan’s term expired in 2004, I was appointed as a Commissioner. I spent nearly a decade on the Board, retiring in 2014. During my tenure, and since that time, there have been no mergers of Class I railroads.

The current proposal addressed here involves a Class I (CSX) and a relatively large Class II railroad (Pan Am) that has a substantial footprint in New England. The Board has characterized this proposed transaction as ”significant” as opposed to “minor,” indicating it will receive thorough scrutiny. Indeed, current STB Chairman Marty Oberman has indicated that mergers in general will be thoroughly reviewed. This is consistent with President Biden’s recent comments on the importance of competition.

A principal positive outcome of this merger, if approved, would be that the New England region would be as fully integrated into the Class I railroad network as the rest of the nation. Currently, there is little Class I service in New England, but that would change with the acquisition of Pan Am by CSX. Railroad service would be more reliable, and would lead to operational improvements and investments beyond what smaller railroads could offer. Indeed, the proposed merger has encountered little opposition and has received numerous endorsements by political leaders and shippers in the New England area.

To the extent that opposition to the merger has surfaced, it has come largely from passenger railroad interests. Amtrak has expressed concern that the merger would lead to increased traffic on lines it operates to Boston. Moreover, the commuter rail operator in Metropolitan Boston has also expressed concern over increased freight rail operations. Neither objection should prove insurmountable. There is no reason to believe that the acquisition of Pan Am will have any negative impact on Amtrak service.

Some have speculated that Amtrak’s opposition might be simply a bargaining chip for its resolution of the New Orleans-Mobile Gulf Coast dispute with CSX and Norfolk Southern. The Board has recently decided to hear Amtrak’s petition against CSX and NS for this case.

Opposition has also been voiced by some in Congress, apparently related to passenger rail issues. CSX has responded that it has a long history of working with the Commonwealth of Massachusetts to improve and implement new railroad passenger service.

CSX has responded to critics of the proposed merger by pointing out the many benefits of the transaction. CSX plans to make significant investments in the regional rail infrastructure, including upgrading Pan Am track. Also, CSX plans to operate Pan Am with a smaller, more reliable and more fuel efficient locomotive fleet. This should improve rail’s positive environmental footprint in the region. Most shippers and legislators have submitted letters to the Board voicing approval for the transaction. President Biden has recently signaled his support for a competitive environment, but the President is also supportive of a cleaner environment. Clearly more efficient rail service could divert significant amounts of truck traffic and improve the environment.

I normally am skeptical of mergers as they invariably result in one less railroad in the arena. When I was on the STB, I considered the possibility that the only mergers of Class I railroads that could pass muster under the new guidelines would be ones involving a failing firm. That clearly is not the case here. Although Pan Am’s finances are not the industry’s best, it is hardly a failing firm.

Still, not all rail mergers are equally problematic. Some, by improving the quality of service to shippers, can actually enhance the competitive environment, especially if transportation competition is broadened to include truck competition. This, I believe, is the case here. New England’s rail service and its competitiveness with other modes will be substantially enhanced if the proposed merger is approved.

One potential outcome of a railroad merger that was the basis of the recent changes in the regulations governing Class I railroad mergers is whether it will lead to further consolidations by other railroads—the so-called downstream effect. While I have always believed that this is speculative and that each merger must be considered on its own merits, the STB is required to take potential downstream impacts into account. However, this is not a merger of Class I railroads, and downstream effects do not appear to be a problem for this transaction, as no other freight railroad has indicated that the approval of the CSX/Pan Am merger would trigger such a response.

As an economist, my normal inclination is to be skeptical with regard to mergers. However, not all mergers are undesirable, and some can have a positive impact. I believe that this is the case here. Finally, in the interest of full disclosure, I have been retained as a consultant by CSX on this project. Nonetheless, the views expressed here are strictly my own.

Francis P. Mulvey is President of Iter Associates, an independent consulting firm specializing in transportation issues. Clients have included the Association of American Railroads, Norfolk Southern Railway and Patriot Rail. Mulvey serve on the Board of Directors of the Rail-to-Trails Conservancy and is also the principal economist for RIM, a group that is seeking to secure private equity capital for Amtrak’s Northeast Corridor. From 2004 to 2013, Mulvey was Acting Chairman and Vice Chairman of the Surface Transportation Board, where he held hearings on a wide variety of topics and voted on proposed mergers and acquisitions. From 2000 to 2004, Mulvey was Staff Director of the Railroad Subcommittee, U.S. House of Representatives Committee on Transportation and Infrastructure; and Staff Director for Hazardous Materials and Pipelines, Committee on Highways and Transit, House T&I Committee. From 1999 to 2000, he was Deputy Assistant Inspector General for Rail, Transit and Special Programs, U.S. Department of Transportation. From 1972 to 2003, Mulvey held a variety of teaching, research, consulting and administrative posts at the RH Smith School of Business and Public Policy, University of Maryland; U.S. General Accounting Office; New York State Legislative Commission on Solid Waste Management; Transportation Research Board, National Academy of Sciences; American Bus Association; Department of Economics Northeastern University; National Transportation Policy Study Commission; Wheaton College; Harbridge House; Bowling Green State University; Wisconsin State Department of Transportation, and the Federal Railroad Administration. Mulvey holds BS, MA and Ph.D. degrees in Economics from, respectively, New York University, the University of California-Berkeley and Washington State University.