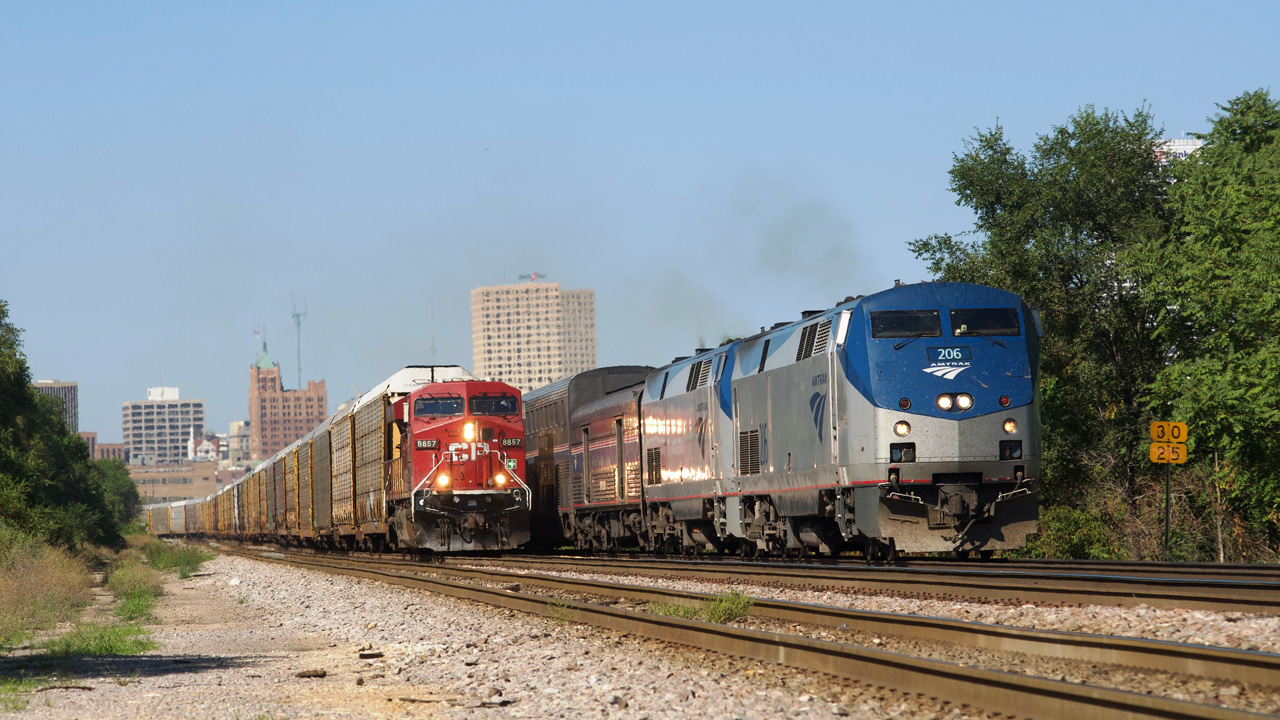 Amtrak and CP said they are filing their agreement of mutual support as part of the docket in the CP-KCS proceeding at the Surface Transportation Board (STB); STB is reviewing the merger proposal and expected to issue a decision in fourth-quarter 2022.

“CP has been an excellent host of Amtrak intercity passenger service year after year and has established itself as a leader in the railroad industry,” Amtrak President Stephen J. Gardner said during the announcement. “We welcome CP’s commitment to our efforts with states and others to expand Amtrak service and are pleased to have reached an agreement formalizing CP’s support of Amtrak expansion in the Midwest and the South.

“Given CP’s consistent record as an Amtrak host, we support CP’s proposal to expand its network. This is exactly what Congress and the [Biden] Administration are seeking: Amtrak and the freight railroads working together to benefit freight customers, Amtrak passengers, our state/regional partners and the general public.”

According to Amtrak, CP has consistently received an A rating in Amtrak’s annual host railroad report card, “recognizing its industry-leading on-time performance record,” and CP is the first Class I railroad to “complete 100% certification of its Amtrak schedules” to the STB.

CP has committed to cooperating with Amtrak to:
• Increase frequency of the Hiawatha Service between Chicago and Milwaukee.
• Extend Hiawatha Service from Milwaukee to St. Paul, Minn., creating a second round-trip on the Twin Cities-Milwaukee-Chicago corridor.
• Provide passenger service through the Detroit River Tunnel between Michigan and Ontario to Windsor and Toronto (with connections to VIA Rail Canada).

Subject to STB approval of the CP-KCS merger, CP has also committed to support:
• The establishment of Amtrak service between New Orleans and Baton Rouge, La. (The last passenger train between the cities was KCS’s Southern Belle, which was discontinued in 1969, one year before Amtrak’s creation.)
• The study of potential Amtrak service between Meridian, Miss., and Dallas, Tex.

“We thank Amtrak for its support of our historic combination, which will have no adverse effects on intercity passenger service,” said CP President and CEO Keith Creel, who is Railway Age’s 2022 co-Railroader of the Year with KCS President and CEO Pat Ottensmeyer. “CP is pleased to continue to support Amtrak and its infrastructure projects to provide capacity needed to accommodate additional service.”

For Railway Age readers keeping track: Before accepting CP’s second merger proposal on Sept. 15, 2021 (No. 1 came March 21, 2021), KCS was to combine with rival partner CN, which came in with a stronger offer (their engagement was announced May 21, 2021). Amtrak opposed the CN-KCS combination. In a June 28, 2021 STB filing, Amtrak wrote: “Unlike the proposed acquisition of KCS by the Canadian Pacific Railway, CN’s proposed acquisition of control of KCS … would not be a purely end-to-end merger. Many parties to this proceeding have identified the 80-mile rail corridor between New Orleans and Baton Rouge, along which CN and KCS have closely parallel rail lines, as the area of greatest concern with respect to rail freight service competition.”

This concerned Amtrak because “CN’s [divestiture] plans for [KCS’s] line, described in the Voting Trust Motion, are one of CN’s principal arguments for approval of the voting trust.”

The divestiture “creates a major new impediment to giving the 2.2 million residents along the New Orleans-to-Baton Rouge corridor the Amtrak service they deserve and have long needed.”

Amtrak explained: “CN is proposing that two freight railroads—CN and an unidentified railroad of CN’s choosing—each have the right to serve local shippers on the KCS [New Orleans to] Baton Rouge Line. CN would also retain the right, presumably along with the new ‘owner’ of the line, to operate through train service.” This, Amtrak said, would be “the equivalent of a homeowner selling their house but reserving the right to continue to live in it.”

There is “nothing ‘clean’ about replacing a single freight rail operator on the KCS [New Orleans to] Baton Rouge Line with two railroads, each with the right to operate their own local trains. The resulting duplication of train services and switching operations would make all rail services less reliable, and unnecessarily consume track capacity that could otherwise be utilized for restoration of passenger rail service.”

Amtrak added: “As the STB has repeatedly and consistently stated, conditions imposed on rail mergers must be ‘operationally feasible’ and produce ‘net public benefits.’ CN’s proposed ‘divestiture’ flunks both tests.”

On Aug. 31, 2021, STB rejected the CN-KCS voting trust, effectively killing the merger, and opening the door for CP to re-engage with KCS (including a “sweetened” offer).