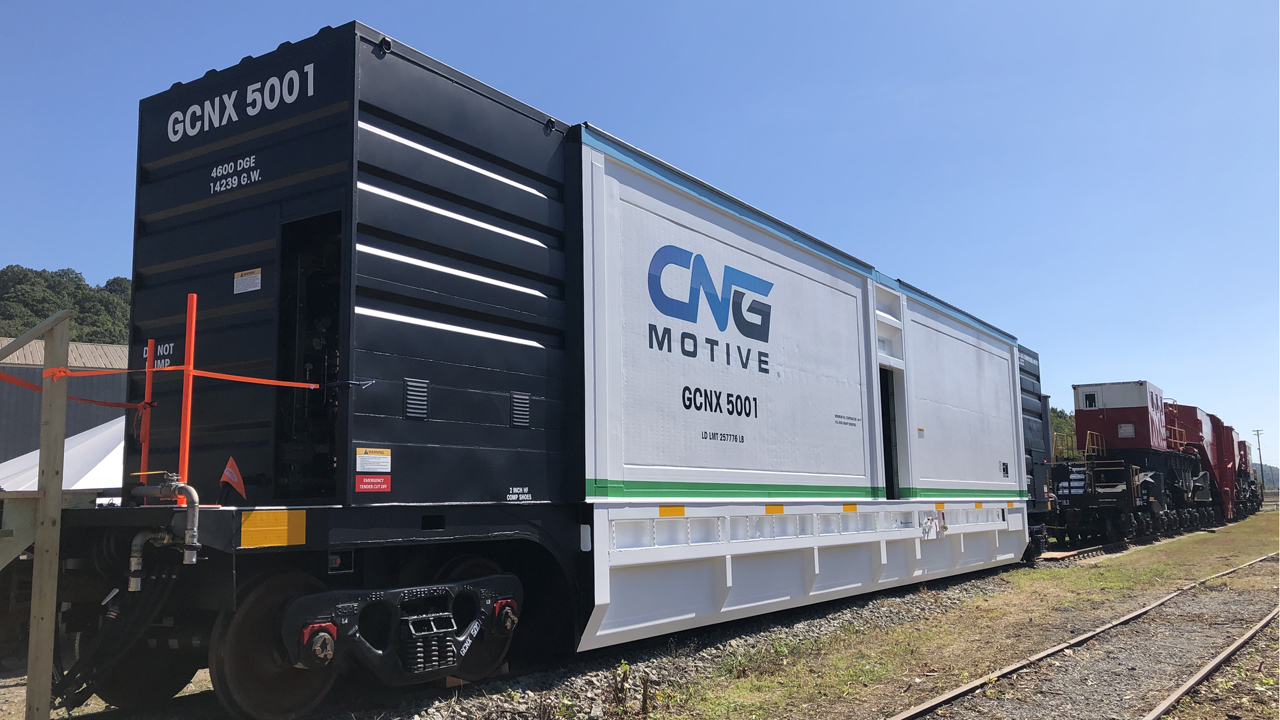 Following seven years of painstaking research and development, CNGMotive, Inc., has rolled out the rail industry’s first compressed natural gas (CNG) locomotive fuel tender. The company co-founded in 2015 by David I. Scott and Pedro Santos has partnered with Norfolk Southern for a revenue service test. Kasgro Rail Corp. of New Castle, Pa., best known for building and operating Schnabel railcars, constructed the tender, which externally looks something like a combination of an intermodal well car and hi-cube boxcar. The Hale Hamilton Valves Ltd. business unit of U.K.-based CIRCOR provided the CNG pressure reduction and control systems.

CNGMotive’s 4,600 DGE (Diesel Gallon Equivalent) fuel tender began life in 2012 as a Pedro Santos sketch on a white board. At the Sept. 19 rollout ceremony at Kasgro Rail, David Scott described CNG as “a transformational opportunity for the rail industry.”

Norfolk Southern, which according to Director of Locomotives Mark Duve “really wanted to try CNG,” will be conducting a minimum-six-month test on a 400-mile, four-crew-district stretch of its Pocahontas Division between Williamson, W.Va., and Lambert’s Point, Norfolk, Va., in “captive” coal loop (loads and empty returns) service. CNG refueling, conducted by Roanoke Gas Company, and locomotive servicing will take place midway at Shaffer’s Crossing in Roanoke, Va. BNSF is loaning two EMD locomotives originally used in its LNG testing program, 9130 and 9131, to NS.  CNGMotive will provide the tender, fueling infrastructure, maintenance and training.

“The test runs will commence immediately when the FRA issues a letter of concurrence, and will be conducted for at least six months of revenue service operation,” NS says. “Based on the results, we will consider expanding the application.”

The CNGMotive tender carries multiple CNG cylinders that hold methane gas at a high supply pressure in order to carry the required amount of fuel to operate the locomotives, which will be configured back-to-back with the tender in the middle, between re-fueling operations. When the locomotives’ prime-movers are started and the throttles are placed in Notches 3 through 8, the high-pressure CNG is lowered by the tender’s PRS (pressure reduction system) to 100 psi at 40 to 70 degrees F before it crosses the fuel coupling over to the locomotives. When this low-pressure CNG is injected into the combustion chamber, a very small amount of “pilot” diesel fuel is simultaneously injected to compression-ignite it. As the locomotive consist increases in speed and horsepower, the amount of gas injected rises accordingly.

The BNSF locomotives to be used in the test program require no changes from their prior LNG configuration. As such, “they are agnostic to the fuel,” Trillanes explains. “They can burn CNG or LNG. The pressure and temperature at the fuel coupler is the same, as well as the 21-pin electrical connectors for the control system.”

Refueling of the locomotive/tender set, accomplished with Chill Fill® technology, is much faster than that of LNG. “There is multiyear successful application of the Chill Fill® technology in the oilfield and industrial virtual pipeline markets, and CNGMotive is the sole licensee of this intellectual property for locomotive fueling applications,” the company notes. “Our proprietary technology allows us to refill very large storage vessels in a 40-minute fill time and a less-than-one-hour total fill cycle.”

In terms of safety, CNGMotive says it has followed 49 CFR 229 Subpart E, which applies to the regulation of locomotive electronics, in conducting and completing the tender’s safety analysis. The company has also complied with AAR M-1004 “Interoperable Fuel Tenders for Locomotives” specifications for crashworthiness, shock and vibration. The CNG specifications for M-1004, originally developed for LNG fuel tenders, are “ready for release,” according to Mark Duve.

“The CNG tender and locomotives have safety systems that, in case of a leak, enable them to shut down immediately,” NS points out. “If a leak occurs, the methane gas will immediately vent off and move vertically into the atmosphere, due to this gas being lighter than air. It will not collect in low-lying pockets and present a safety hazard like other gases such as propane. Every safety component that has been installed for this application, as well as extensive FEA (Finite Element Analysis) and physical testing of the tender structure, is a vital component of the CNG fuel tender.”

NS says that it “is committed to investing in the training of first-responders along our test route on responding to accidents involving CNG.” The railroad will be employing its Operation Awareness and Response Safety Train to help educate first-responders, the general public and surrounding communities about the use of CNG as a fuel source. NS will also be educating these groups on the safety precautions that have been incorporated “to prevent any possible personal hazard.”

NS adds that it is “working diligently with the FRA to address all safety issues that might arise during this preliminary test operation. Regulations can be expected to be developed to insure that the safety of CNG as a railroad fuel is not compromised.” NS has requested an FRA letter of concurrence for test approval.

CNGMotive expects that CNG locomotive operations “will result in a 95% reduction in particulate matter and a 20% reduction in carbon dioxide [compared to diesel]. 60% fuel substitution will mean significant cost savings with each round trip. CNG is currently an accepted transportation fuel for many applications: on-highway semi-trucks, buses, waste removal trucks, UPS delivery trucks and farm pick-ups. According to the American Gas Association, use of natural gas is becoming increasingly prevalent, as there are 600,000 new natural gas customers each year. American businesses have saved $105 billion through the use of natural gas since 2009, and 42 states have adopted, or are considering, proposals to expand natural gas infrastructure.”