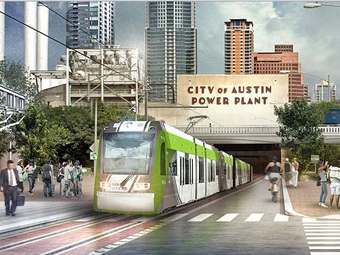 It should come as no surprise that campaigns for new urban rail startup projects have been meeting stiff opposition in a couple of American cities. That's usually the case, isn't it? However, the efforts in both Cincinnati, Ohio, and Austin, Tex., are particularly newsworthy because they involve a rather surprising juxtaposition of project supporters and opponents.

Typically, a campaign to install a new urban rail transit line is led by local government agencies, like the transit authority or municipality. The opponents are usually assorted anti-rail interest groups in the community, such as NIMBY (Not In My Back Yard) neighborhood groups and highway construction promoters. What’s different about Cincinnati and Austin, though, is that they’ve both involved broad citizens’ coalitions mobilizing on behalf of urban rail projects and facing opposition from the city government.

In Cincinnati, Mayor John Cranley, newly elected in November, has led the effort to pull the plug on the city-sponsored streetcar project, well under way, with track already laid in the street. He’s been aided by the election of several other new anti-streetcar council members.

This not only prompted the Federal Transit Administration to threaten to demand repayment of tens of millions of dollars in funding, but also inspired, in effect, a local grassroots rebellion by rail project supporters. A massive mobilization for a referendum to require completion of the rail project collected roughly twice the number of signatures required. On Dec. 19th, this show of force apparently persuaded a majority of the council to vote to continue the project.

The success of Cincinnati’s grassroots urban rail campaigners — and their strategy — are being eyed by community counterparts in Austin, Tex. However, the circumstances are considerably different from Cincinnati’s — since Austin officials are pursuing urban rail, but in more outlying areas rather than the heart of the city as desired by a major coalition of Central Austinites.

Back in March 2012, I described the developing situation in my article “Austin LRT plan criticized … by rail advocates.”

As I indicated, I was one of a “group of avid transit activists” advocating an alternative route in Austin’s “neediest travel corridor”, which, as I explained, “runs along a couple of major central-city thoroughfares called Lamar and Guadalupe, which channel a huge travel flow from the north and northwest down southward through the heart of the city and into the Core Area — including the University of Texas (plus the fourth-densest residential neighborhood in the state), the Capitol Complex (state Capitol plus a cluster of state offices), and Austin’s downtown.”

Since then, support for a line in this alternative central “backbone” travel corridor has grown into a sizable coalition of established neighborhoods, community groups, and other Austinites, predominantly in the core city. The official plan, on the other hand, is now championed by Project Connect, an amalgam of several agencies including the City of Austin and Capital Metro, the transit authority. A somewhat rancorous public debate between the two urban rail proposals is currently raging locally.

I won’t belabor this post with all the arguments and fine details, but for context and more specific information, I’d recommend the Austin Rail Now blog site (to which, incidentally, I’m a contributor). For the official viewpoint, I’d recommend the Project Connect website.

A number of issues of wider relevance and concern have emerged from the Austin urban rail saga, and I hope to discuss them in future posts.

Meanwhile, I’m collaborating with John Schneider — widely regarded as Cincinnati’s outstanding advocate of urban rail, and known locally in the metro area as “Mr. Streetcar” — in Urban Rail Today, a consulting effort aiming to share our experience and knowledge in planning new rail transit systems and building community support. Our website has ongoing reports and discussion of new projects and operating systems as well as important rail transit issues

Hopefully, others will benefit from both our successes as well as our mistakes.