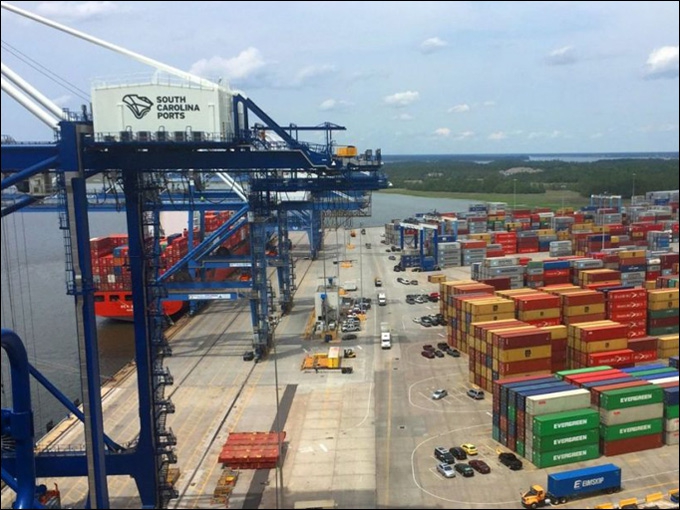 The South Carolina Ports Authority Board of Directors approved a $69.5-million contract for the purchase of six new ship-to-shore cranes to serve growing container volumes and larger ships calling the Port of Charleston.

“As the largest crane purchase in our history, the contract approved today is an important part of our overall investment in infrastructure and capacity to ensure the Port is well-positioned for the future,” said Jim Newsome, SCPA President and Chief Executive. “When the cranes arrive in late 2019, deepening of the Charleston Harbor to 52 feet will be nearly two-thirds complete and construction of our new container terminal will also be nearly finished.”

It’s the latest salvo among eastern U.S. ports rushing to upsize container capacity following the expansion of the Panama Canal. Both CSX and Norfolk Southern provide daily rail service at the port.

The cranes will be manufactured by Shanghai Zhenhua Heavy Industries, LTD (ZPMC). Five cranes offering 169 feet of lift height will be delivered to the Hugh K. Leatherman, Sr. Terminal, the only permitted container terminal under construction on the U.S. East or Gulf coasts. Phase One of the terminal is scheduled to open in mid-2020 with an annual capacity of 628,000 twenty-foot equivalent container units (TEUs).

In addition, one 155-foot crane will be delivered to the Wando Welch Terminal, SCPA’s busiest container terminal. The Wando Terminal received its first two cranes of this size in August 2016, and ZPMC is currently manufacturing two additional cranes for delivery in February 2018. By 2020, nine of the 13 STS cranes at the Wando Terminal will offer 155 feet of lift height to support SCPA’s efficient handling of two 14,000-TEU vessels simultaneously.

The authority handled 65,269 tons of breakbulk cargo across its docks in Charleston in September and 153,304 tons fiscal year to date.

Inland Port Greer handled 10,648 rail moves in October for a fiscal year-to-date total of 30,401 moves, a 16% increase over the year-ago period.