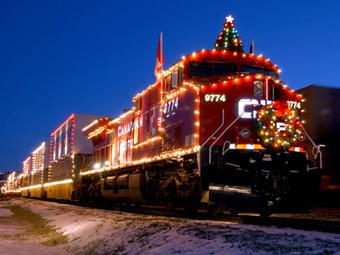 Canadian Pacific (CP) announced on Dec. 22 that its 18th annual Holiday Train has collected donations of $1.2 million and 250,000 pounds of food to this point.

CP says “as food banks continue to count the money raised and weigh the food donated at each stop this year, the program is on track to have raised more than C$13 million and four million pounds of food since its inception in 1999.”

“With the need for food banks continually increasing in both Canada and the U.S., the importance of the CP Holiday Train program in the community is also increasing,” said E. Hunter Harrison, CP’s Chief Executive Officer. “Beyond food and monetary donations the CP Holiday Train generates goodwill, raises spirits and helps people start the holidays off on the right foot. We thank the communities across our network for supporting the program and giving back to their neighbours.”

“We are grateful for the in-kind support that CP provides to Food Banks Canada through transportation resources and the direct monetary donations it gives to communities through the Holiday Train program,” said Katharine Schmidt, Executive Director, Food Banks Canada. “CP’s history as a Food Banks Canada partner is a long and collaborative one and we look forward to the future.”