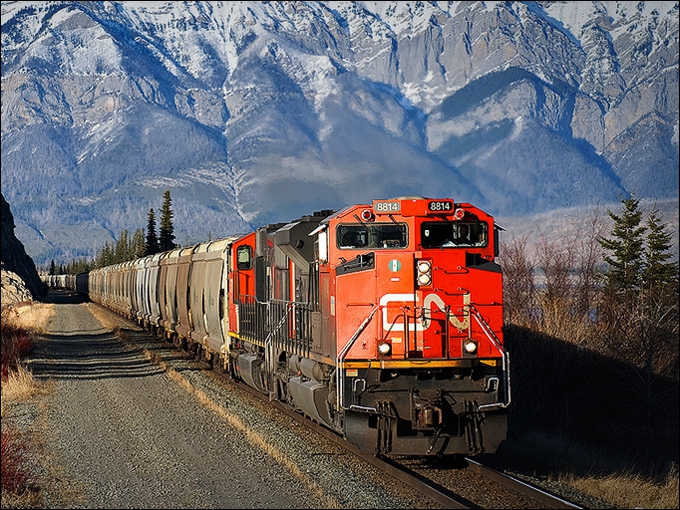 The Montreal-based company said that without the tax benefit, adjusted net income decreased by 6% to C$897 million, and adjusted earnings per share by 2% to C$1.20. Operating income fell 7% to C$1.3 billion.

Revenues increased by 2% to C$3.29 billion as revenue ton-miles (RTM) increased by 1% and carloadings rose 7%. Rail freight revenue per RTM also increased by 1%. Operating expenses were 9% higher at C$1.98 billion, and the operating ratio of 60.4% increased by 3.8 points.

Full-year carloadings increased by 10% while RTMs strengthened by 11%. Rail freight revenue per RTM decreased by 2%, mainly on an increase in the average length of haul and the stronger dollar.

The program, CN said, will focus on key capacity projects to meet growing demand and continue investment in infrastructure maintenance to enhance safety and efficiency.

“CN is investing more than ever before in the safety, efficiency and resiliency of our network,” said Luc Jobin, CN President and Chief Executive. “These record investments, a substantial portion of which will go to new capacity and growth projects, will improve our network fluidity, allowing us to deliver superior service to meet our customers’ growing freight volumes.”

Within the Class 1’s planned C$1.6 billion track and railway infrastructure maintenance envelope is the replacement of 2.1 million crossties; more than 600 miles of rail, as well as bridge work and other general track maintenance. The maintenance spending is consistent with what the railroad has spent during the past three years on basic maintenance.

What is driving the bump in the program in 2018 is the planned C$700 million on capacity investments in both infrastructure and equipment.

“Our trains will continue to get bigger. With more trains on the network, we must reduce the number of times trains have to stop from meeting and the duration of that stop. That is why a number of our investments are targeted for building double-track sections where our big trains can meet without stopping,” said Cory.

Approximately C$400 million is to be spent on equipment, including the acquisition of new high-horsepower locomotives. A further C$800 million is targeted at initiatives to increase capacity and enable growth, such as track infrastructure expansion; investments in yards and in intermodal terminals, and on information technology to improve safety, performance, operational efficiency and customer service.

Major capacity and equipment investments include:

The company plans to invest approximately C$400 million in 2018 on the implementation of Positive Train Control along 3,500 route miles of its U.S. network. CN plans to invest a total of US$1.4 billion on PTC capital expenditures by 2020.

“CN’s growth continues to outpace the economy,” Jobin said. “With our 2018 capital program and ongoing hiring, we are focused on meeting the needs of our customers. We have confidence in the North American economy and in our ability to help our customers grow their businesses.”