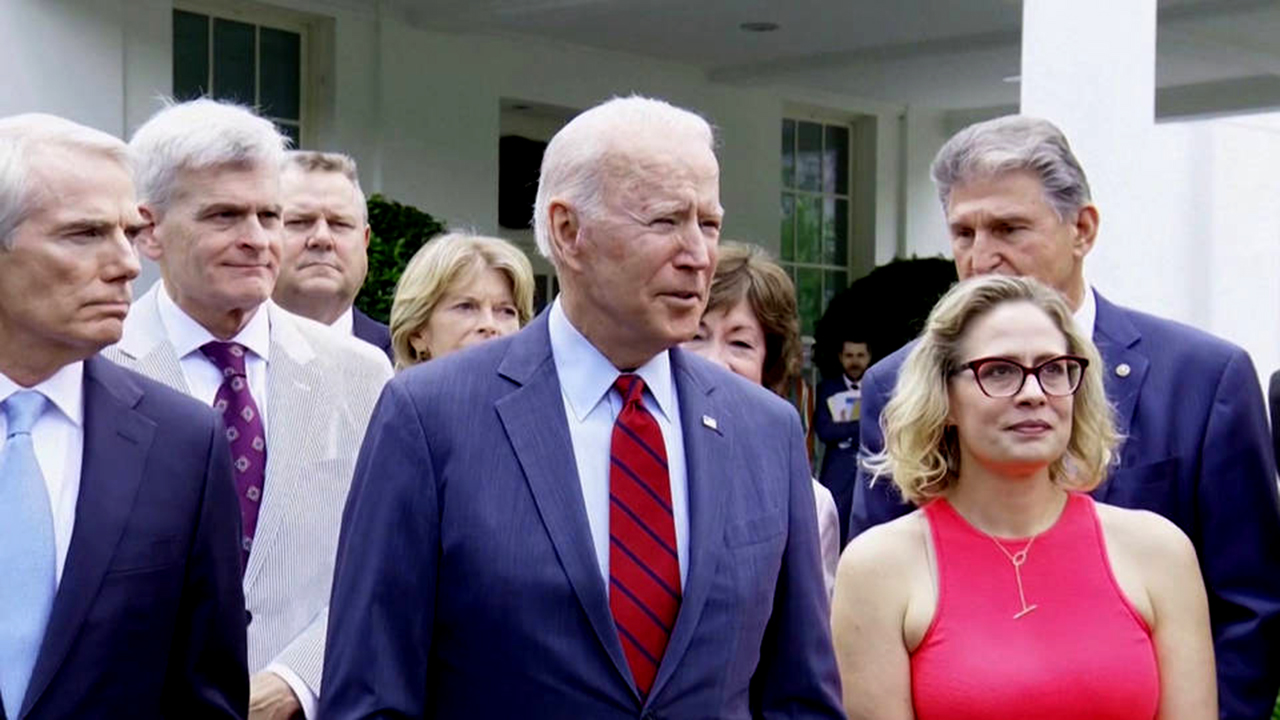 President Joe Biden and a bipartisan group of U.S. Senators have agreed on a five-year, $973 billion infrastructure framework that includes $579 billion in new spending over that period, of which $312 billion is slated for transportation.

Of the new transportation spending, public transit would receive $49 billion; passenger and freight rail, $66 billion; ports and waterways, $16 billion; roads, bridges and major projects, $109 billion; and airports, $25 billion. The framework also includes $266 billion for other new infrastructure spending on water, broadband and power infrastructure, for instance. Added to a baseline of $394 billion, the framework would total $973 billion over five years. If extended to eight years, the entire package would total $1.2 trillion—55% of what the White House originally proposed, and which most Congressional Republicans opposed.

The New York Times called the deal “a victory for the White House, but only the first lurch in what promises to be an arduous attempt to reshape the nation’s economic and social programs.”

The framework will “[i]mprove healthy, sustainable transportation options for millions of Americans by modernizing and expanding transit and rail networks across the country, while reducing greenhouse gas emissions,” according to a White House Fact Sheet released on June 24. “The Plan is the largest federal investment in public transit in history and is the largest federal investment in passenger rail since the creation of Amtrak.”

Following his meeting with 10 of the 21 Senators in the bipartisan group, Biden said he was pleased that the group had “come together and forged an agreement that will create millions of American jobs and modernize our American infrastructure to compete with the rest of the world …”

He also noted that “[n]either side got everything they wanted in this deal, and that’s what it means to compromise.”

Biden added that the agreement’s investments “represent the kind of national effort that, throughout our history, has literally … transformed America and propelled us into the future. The transcontinental railroad, the Interstate Highway System—investments that we made together that only our government was in a position to make. Now we’re poised to add a new chapter in that American tradition.”

The bipartisan Senate group said in a joint statement: “Today [June 24], we’re proud to advance this bipartisan proposal to make a historic investment in America’s critical infrastructure needs, advance cleaner technologies, create jobs, and strengthen American competitiveness, without raising taxes. This agreement shows that the two parties can still come together, find common ground, and get things done that matter to everyday Americans. We are happy to have President Biden’s support, and will now get to work enlisting the support of colleagues on both sides of the aisle.”

Among the transportation industry leaders expressing their support:

• In a June 24 tweet, U.S. Department of Transportation Secretary Pete Buttigieg called the agreement “a big deal for transportation infrastructure, climate action, equity, job creation, and more. It represents a key part of the President’s economic agenda, with major and much-needed investments in America’s future.”

“Our nation demands forward-looking infrastructure investment that modernizes public transit and passenger rail systems and meets the growing and evolving mobility demands of communities. We have a once-in-a-generation opportunity to help our communities meet growing mobility demands, create family-wage jobs, expand U.S. manufacturing and supply chains, and grow the economy.

“While optimistic about the proposed bipartisan framework, APTA reiterates its strong support for H.R. 3684, the INVEST in America Act, which will put American infrastructure on a footing to compete with any country in the world. APTA strongly supports the bill and its critical investments for surface transportation infrastructure, including $109 billion for public transportation and $95 billion for commuter rail, Amtrak, and other high-performance rail. The INVEST Act will put the country on a path to increase access to opportunities for all Americans and build more equitable communities, while also addressing the environmental and sustainability challenges facing our communities, nation, and the world.”

The INVEST in America Act—surface transportation reauthorization legislation that would succeed the current FAST (Fixing America’s Surface Transportation) Act—is scheduled to be on the House floor during the week of June 27.

What’s next for the infrastructure framework? The Times reported that “[a]lmost immediately after reaching the breakthrough, Mr. Biden and Democrats offered a giant caveat that could complicate its chances of passage. Both the President and top Democrats said the compromise, which constitutes only a small fraction of the expansive, $4 trillion economic agenda Mr. Biden has proposed, could advance only together with a far larger bill that would pour trillions more into health care, child care, higher education access and climate change programs. That measure, vehemently opposed by Republicans, would be paid for by remaking the tax code to capture the wealth of the superrich and multinational corporations that shift profits and jobs overseas.

“‘If this is the only thing that comes to me, I’m not signing it,’ Mr. Biden said of the infrastructure piece. ‘It’s in tandem.’

“[House] Speaker Nancy Pelosi called the changes in their totality ‘transformative, if not revolutionary.’ Senator Chuck Schumer of New York, the majority leader, predicted that the pair of bills would be ‘the boldest, strongest legislation that this country has seen in decades.’

“They said they hoped all of it could come together by this fall, an enormous challenge that will involve persuading at least 60 senators to back the traditional infrastructure plan, and keeping Democrats united on the larger bill. The latter measure would have to pass through a budget process called reconciliation, which would allow it to bypass a Republican filibuster, but would require all 50 Democratic and independent votes in the Senate.”

And according to Politico, “Senate Republicans who negotiated an infrastructure deal with President Joe Biden celebrated [June 24], then woke up angry on [June 25]. The five GOP senators who cut a deal with moderate Democrats and the President are frustrated that Biden explicitly tied his signature on a bipartisan infrastructure bill to a separate Democrats-only measure, according to three Republican aides familiar with the dynamics. Biden has long said he wants to push forward both measures together, but Republicans viewed his Thursday comment as openness to vetoing the very same bill he’d just endorsed … One [Republican] aide said that clearly linking the two infrastructure bills was never discussed—not within the group of 10 senators who met Biden on [June 24], the bigger group of 21 senators who endorsed their work, or with the White House. A second [Republican] aide said that frustrations run far deeper than Sen. Lindsey Graham (R-S.C.), who began griping publicly late Thursday.”

UPDATE, JUNE 26: The Times reported that “on Saturday [June 26] as lawmakers and aides continued to stew and the prospects of a legislative victory seemed to fade, Mr. Biden conceded that he had misspoken.”

Biden “admitted that his comments on Thursday [June 24] ‘left the impression that I was issuing a veto threat on the very plan I had just agreed to.’

“That was ‘certainly not my intent,’ he added.”

According to the Times, “lawmakers and aides signaled they would move forward with writing text and securing support.

“‘The bottom line is this,’ he [Biden] said. ‘I gave my word to support the infrastructure plan, and that’s what I intend to do. I intend to pursue the passage of that plan, which Democrats and Republicans agreed to on Thursday, with vigor. It would be good for the economy, good for our country, good for our people. I fully stand behind it without reservation or hesitation.’”