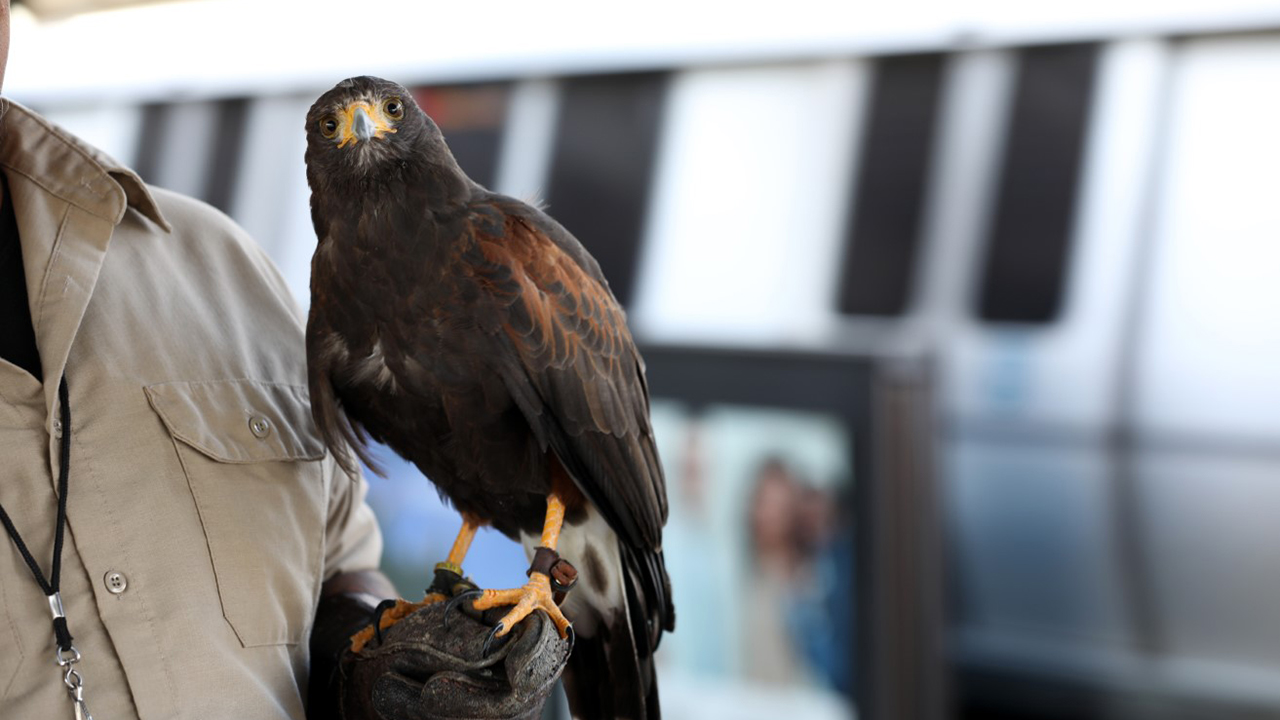 Editor’s Note: In this rather offbeat story, Bay Area Rapid Transit has turned to a hawk for ridding pesky pigeons from perching and dropping “presents” on unsuspecting passengers on the train platform. — William C. Vantuono

Though Pac-Man doesn’t know it, he’s got a very important job to do: manage the pigeon population at the above-ground BART station.

Pigeons are non-native, non-migratory, and invasive. Their droppings can carry bacteria, fungal agents, and ectoparasites that can impact humans (Note: El Cerrito del Norte Station is cleaned daily, starting at 6 a.m.). The city-loving birds, if left unchecked, can roost in a single location for years.

The pigeons have come to El Cerrito del Norte Station seeking shelter from the elements. When the birds have nested, they aren’t eager to pack up and leave.

Over the years, BART has taken numerous steps to mitigate the pigeon population at the station. Hundreds of bird-repellant spikes and netting can be seen fastened to ledges, pipes, fare machines, and other surfaces in the station, which received a total makeover in 2021.

“We brought in owl statues, we tried nets, we tried various measures with noise. We did quite a bit to see how we could gently move them along,” said Wahid Amiri, Project Manager for the El Cerrito del Norte Station Modernization Project, which concluded in Spring 2021. “Nothing was successful.”

In late May, BART hired Falcon Force, a small business based out of La Crescenta, Calif. that offers professional bird abatement services. Now, Pac-Man and his handler, Ricky Ortiz, come to the station three times a week for eight hours a day.

In just a few weeks, Ortiz said he’s noticed a huge difference in the number of pigeons at the station.

“The first day I was here, there were pigeons everywhere,” said Ortiz, who’s handled hawks for more than a decade. “The next week, after Pac-Man showed up, there were way fewer.”

Ortiz said he’s never “seen more done to deter pigeons at a single location,” including at the landfills, resorts, and farms he’s worked at previously.

Hawks such as Pac-Man are natural-born predators and their presence alone deters prey birds, like pigeons. Walking the station with Pac-Man, Ortiz merely has to lift the bird in the general direction of a sitting pigeon for the bird to flap away hastily.

There are alternative and more hostile modes of dealing with pigeons, including horns, “bird bombs,” and poisons. Employing a hawk for abatement has proven to be less disruptive and often more effective.

“Trapping works to an extent, but you can only trap so many,” Ortiz explained. “A bird of prey works really well. When the pigeons see the predator, it’s instinct for them not to want to be around.”

In time, the pigeons note that the station is the hawk’s territory and find another shelter. If all goes to plan, the hawk will provide a permanent solution to the pigeon problem.

Pac-Man is not bothered by the business of the station, Ortiz said. “These birds are used to hustle and bustle. The noise from the BART train doesn’t even faze him,” he explained. And Pac-Man gets lots of treats throughout the day—quail, rodents, rabbits, and other fare hawks like.*

Harris hawks make an ideal raptor for this sort of work. They’re mellow birds, and the only social raptor in the animal planet.

“In the wild, they live and hunt in family groups,” said Ortiz. “They’re known as ‘wolves of the sky.’”

When Pac-Man is not actively deterring pigeons, he’s providing entertainment and education for patrons, many of whom stop to talk with Ortiz and ask questions about the bird. Cell phone cameras pop up wherever Pac-Man flies. And if he flies too far from Ortiz, the handler’s handy whistle calls him back in seconds.

Said Ortiz: “It’s hard to beat a Harris hawk when it comes down to it.”

*Editor’s Comment: How about feeding him a few fare-beaters?