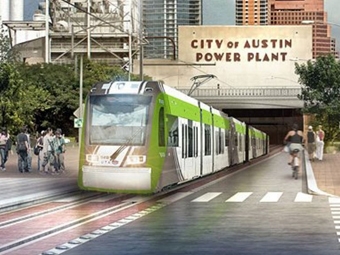 How can this be? To understand, first it will help if you review several of my previous blog posts on this issue, which explain why the plan was so bad, and why so many local rail advocates (including yours truly) opposed it:

Basically, even without the ferocious opposition of the city’s most ardent and savvy rail advocates, this proposal (developed by a consortium of public agencies called Project Connect) would have been a hard sell in any case. It was a phenomenally weak, even puzzling, route — lots of voters, gazing at the proposed route, might well be imagined to have scratched their heads and said “What?” The line, connecting points useful to very few in the community, was aptly described as a “non-corridor.”

On top of that, the project (9.5 miles of line for a completion-year cost of $1.4 billion) was grossly over-designed and overpriced — a drawback captured in a commentary I presented to one of the planning groups, with the revealing title “Project Connect’s gold-plated Austin urban rail plan shows planning process way off course.”

Add in that energetic opposition from pro-rail community leaders and neighborhood groups, and procuring voter approval became a daunting challenge. There was, of course, the usual opposition of the anti-rail, pro-highway faction, which poured money into an ad campaign that effectively rebuffed the months-long media ad blitz supporting the official plan. All in all, even though the official project campaign outspent adversaries by more than 2-to-1, the efforts of rail supporters opposing the project probably tipped the balance to rejection.

Feeding widespread and irate community hostility to the plan was a sense of disenfranchisement from the process that had concocted the 9.5-mile plan. Many transit supporters, in particular, felt that Project Connect’s “public outreach” program was a sham, effectively shutting them out from the real planning and decision-making activity, which seemed aimed at reaching a foregone conclusion. Memo to planners: Don’t underestimate the desire of community members to be authentically involved in your project.

Where do we go from here? The most determined coalition of rail supporters (who opposed the official project) are continuing a struggle for light rail in the city’s most heavily traveled central local corridor, marked by two major arterials, Guadalupe St. and North Lamar Blvd. That high-traffic, high-density corridor has seen more than three decades of scrutiny and more than $30 million worth of public evaluation.

Hopefully, a Guadalupe-Lamar light rail project (as depicted in image above) will be rising from the ashes of this election, and will make a lot more sense to voters.

For more analysis on this curious case of Austin’s urban rail ballot failure as a great step forward for rail transit, I’d recommend a couple of articles:

My greatest hope is that lessons can be learned from this experience that will help well-planned rail projects, wherever they are, move forward to success.