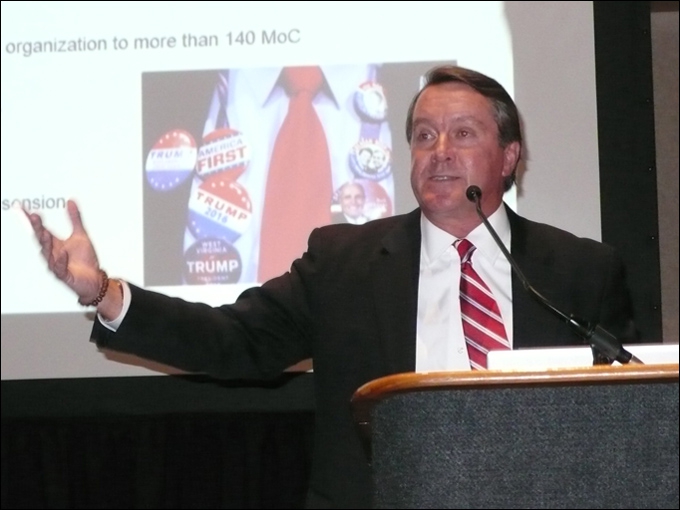 INDIANAPOLIS – It will likely be 2018 before Congress makes good on President Trump’s pledge to pass an infrastructure spending bill, according to a member of his inner circle, just one item on a long waiting list of legislative issues concerning the rail industry.

“Infrastructure is still on the President’s agenda, but it has faded in priority order, behind health care reform and tax reform,” said Scott Mason, senior policy advisor for the Washington office of law firm Holland & Knight and an original member of Trump’s Washington campaign team.

“I think Congress and the President are still working on a trillion-dollar infrastructure bill, but they are focused not on the process but outcome,” Mason said. “There are multiple agencies working on it, from the Department of Energy to the Veterans Administration and others. I think second- or third-quarter 2018 would be a good time to pass it, then elected representatives can go back to their constituents ahead of the midterm election and say, ‘I got you a road, I got you a bridge.’

“At the end of the day, they [Congress] are going to have to pass a bill.”

It’s critical, Mason said, for RSI and other businesses to play a part in the process. “Your voice is also critical, and must be heard.”

Mason acknowledged that funding for infrastructure was expected initially expected to come from savings realized by repeal and replacement of the Affordable Care Act, and from tax reform legislation. Healthcare has been set aside for now, and tax reform is in process. Mason predicted a new tax bill could be passed as early as the fourth quarter of this year, or the first quarter of 2018 “at best.”

“There’s been a lot of output by us, but no outcomes,” said Mike Friedberg, also a senior policy advisor for Holland & Knight, and a member of its Transportation Team.

The House of Representatives last week passed its version of an omnibus appropriations bill with substantial funding for transportation including $900 million for Amtrak and the Northeast Corridor. “Hopefully, something will get done on this bill [by the Senate] in December,” he said, adding RSI has been invited to testify at rail infrastructure hearings in Washington.

As far as appropriations are concerned, the Trump Administration has created a private equity atmosphere with a view toward a return on investment, and not one of state subsidies. “Both House and Senate committees want a bill for, and support from, the rail industry, a grassroots effort to get action. We are a Trump industry, with good-paying jobs” he made a campaign issue.

At the same time, Friedberg said, nominees to head both the Federal Railroad Administration and Pipeline and Hazardous Materials Safety Administration continue to be held up by political opposition from New Jersey and New York representatives looking for federal monies for the trans-Hudson Gateway Project.

Panelist Chuck Baker, a partner at Chambers, Conlin & Hartwell who represents the National Railroad Construction & Maintenance Association, and the American Short Line & Regional Railroad Association, said that renewing the short line investment tax credit, known as 45G, is “the first, second and third priority” in Washington for short lines. “We would like to see 45G made permanent as part of tax reform, that’s Plan A,” Baker said. “Plan B would be some other kind of tax reform. Plan C is the fabled infrastructure bill. It’s all unclear and keeps me up at night.”

Baker said his groups will continue to fight efforts by motor carriers to raise nationwide truck weights to 91,000 pounds, as well as the perennial issue of federal approval to operate twin 33-foot trailers. He observed that Sen. Richard Shelby (R-Ala.), is likely the next chairman of the Senate Appropriations Committee, and a supporter of twin 33’s, “so that’s a fight we’ll take into 2019, if the GOP holds the Senate [in the 2018 midterm elections].

As far as the federal regulatory environment for rail, Baker “feels good” about the remainder of 2017 and into 2018,“ and that rail will maintain its post-Staggers Act “’win streak,’ although our friends at CSX aren’t making our job any easier over the past couple of months.”

Baker said the Class I railroads are on schedule to meet the 2018 federal deadline for implementation of Positive Train Control, but that short lines and commuter lines aren’t. “There are going to be a lot more conversations about what to do with folks who won’t meet the deadline, such as commuter operators who run on Class I railroads. There could be a “‘not on my PTC property’ attitude, and a problem one day.”

Panelist Anne Canby, founder and director of the OneRail Coalition, called out the “huge imbalance” in government investment in highway, air and rail. To get the message out, OneRail will hold a rail infrastructure forum, pointing out “the industry’s good-paying jobs in the constituency that elected the President.”

“The industry should let people know the role rail plays, and about how it keeps the country moving forward,” Canby said.

Editor’s Note: This article includes a correction to state that the infrastructure bill would be passed in 2018.